Dark forces stir against you. If you do not act quickly, a sinister plot will be fulfilled.
Michael Komarck
Scatola Base #166. Ancient Evils #1-3. 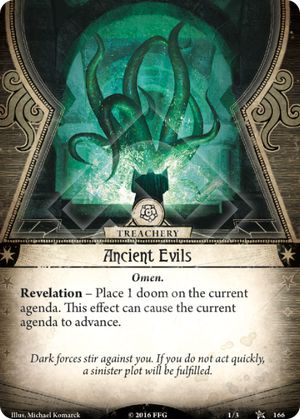 I think this card makes the game less fun. Drawing it has abruptly ended multiple scenarios for me. Being defeated from damage or horror or otherwise losing after drawing a token from the bag is much more fun than pulling a card that basically says "Game Over".

micahwedemeyer · 40
I don’t think scenarios should ever have a mixture of ‘doom in play’ and ‘+doom which can advance’ cards in the encounter deck. They both have interesting effects on their own (interactable high priority threats or added uncertainty in the doom clock) but together they can create those really feels-bad moments. Hope someone brought Ward of Protection 2... — Death by Chocolate · 13 2/27/19
I think the devs have recognized how un-fun the card is; they've replaced it in both "Return" campaigns so far (I think). That being said, this card is responsible for one of my best Arkham memories: my four friends and I (we decided to just say screw the player limit) were playing our first-ever attempt at Essex County Express, and had all taken the first round to set up. In the mythos phase we drew at least two copies of this and advanced the agenda, killing everyone in the party. Setting the scenario up took longer than playing it. — SGPrometheus · 176 2/28/19
Personally i don't like this card, but moments like describes are part of the Cthulhu Mythos — Django · 2228 3/1/19
Sry, last comment incomplete. I meant that moments like "you'll die and you can't do anything about it" are part of the Cthulhu mythos and this game has far too few of such elements. — Django · 2228 3/1/19
Oof. I just created the encounter deck for Shattered Aeons. It has a plethora of "put 1 doom out in play" cards (like Acolyte) along with 3 copies of Ancient Evils. I think I'm just going to remove Ancient Evils altogether. In our 4-player group, the swinginess factor is massive, and losing multiple rounds due to an unlucky draw order in the mythos phase is un-fun to the max. — micahwedemeyer · 40 9/11/19