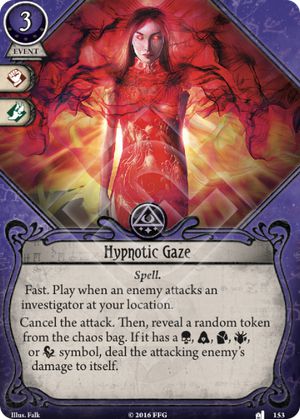 Like Dodge, but with a chance to hurt the enemy! What could go wrong?

Well, in my experience quite a bit. First of all it's much more expensive than dodge is, which can cause extreme opportunity cost as you have to choose between taking damage now, and having a better board setup next turn. Furthermore the reflected damage is not guaranteed, which kind of negates a huge amount of this card's benefit.

Now, in theory you can run a sadism run where (Slight campaign mechanic spoilers) ------ you intentionally fill the bag with these negative nancy tokens (... not as bad an idea as it sounds on Expert difficulty) ------ and I can't comment on the strength of this card then, but in a more vanilla run it can be pretty unlikely to trigger.

I think, like Song of the Dead without a better way to control the chaos bag, extremely swingy cards are going to remain cool in theory, but bad in practice.

Difrakt · 1180
The mystic deck has many expensive cards (3+ ressources), but many with charges, you're better off saving these for such cards, over 1 use stuff. — Django · 4426 6/17/17
Combined with Dark Prophecy, the chance of this doing damage is greatly increased. That adds to the cost, making it 4 total resources, for a potential of doing damage as a Fast action. — Tiktakkat · 38 7/14/18
Unlike other spells, this can't be used with Uncage the Soul (fast action trigger), which is another knock against its surprisingly high cost. — PureFlight · 710 8/22/18
Besides Dark Prophecy this can now also be combined with Olive McBride to increase its effectiveness. Premonition is another possibility. — Cluny · 51 9/28/18
Olive McBride increases the chance of a hit from 31.25% to 67.5% (with standard night of the zealot chaos token pool). This means that Olive would give you a hit 1 out of 3 times beyond the baseline odds of 1/3. Dark Prophecy increases the chance to 84.64%, which corresponds to it giving you a hit 1 out of 2 times over the baseline odds. — jmmeye3 · 594 2/8/19
There's something to say for Grotesque Statue here — shenaniganz11 · 9 10/28/20
3

This card needs combo effects to be good. Namely, consider using this with Jacqueline Fine around, Olive McBride, or Dark Prophecy. Also Eldritch Inspiration can make the damage to the enemy go off twice. Canceling the attack and not getting the return damage on the enemy is a subpar effect for how expensive this card is, so you want to try to get the return damage every time.

Also worth noting that this works on Elites, so this can cause some big bads to hit themselves for a bunch of damage, which can be very useful.

Soloclue · 2382
I feel like a ton of support for this card has come out since it was printed, but it's remained pretty obscure. In the right deck, this sounds pretty crazy good. — SGPrometheus · 688 4/14/20
It's a nice combo when you play Olive and/or Jacqueline. Outside of them, i think it's too expensive for a one time effect and not every scenario has a BBEG. Some dont even deal damage. — Django · 4426 4/14/20
Jacquelin will get a level 2 upgrade of this card. Cost -1 and you can choose the horror instead of the damage to be converted into damage vs. the enemy. Her using Grotesque Statue and Dark Prophecy on this, Yog-Sothoth would love to discard some cards. — Susumu · 271 8/6/20
I've been using it in a Diana deck (Path to Carcosa campaign) and can trigger the damage reliably, but it is expensive. I tend to keep it in hand for use against elites where the return on investment is high. I wish there were an upgraded (maybe XP: 2, with Arcane Research taken into account) version that just lowered the play cost by 1. — KillerShrike · 1 8/15/20
@ KillerShrike: Like I wrote before, this card will get an upgrade with Jacqeline: level 2 (so 0 xp, if you use 2xAR), lower cost by one resource AND the ablity to trigger horror from the enemy. Link to the spoilers of her deck: https://imgur.com/a/qPCL8Ts — Susumu · 271 8/26/20
Indeed; I got the five new investigator packs today and saw the upgrade with my own two eyes. Ironically, we finished Path to Carcosa and had one last hurrah with our investigators via The Blob That Ate Everything last weekend. We're planning to do The Forgotten Age next week with new investigators, so my Diana deck is getting retired...but I'm glad the upgrade of this card is in the card pool. Might come in handy at some point... — KillerShrike · 1 8/30/20
@Django, if you're using this card with Olive's ability, it says to pick 3 and choose to, resolving both. So, do you activate the damage twice (once for each token, if pulled)? — Deadlykipper · 1 2/6/21
0

17 Jan 2023. Used Hypnotic Gaze x2 on The Devourer Below. With sheer luck, the boss dealt 3x2 damage to itself. Very useful for the Elites and the boss. Instant save for 1 person and damage to the boss.