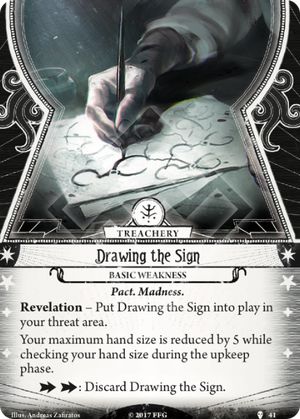 I pulled "Drawing the Sign" as my random basic weakness for Sefina in my circle undone campaign, and it really hurts! Drawing this during the upkeep phase when you have a hand full of cards is really frustrating (which is, I suppose, good for a weakness). This weakness has the potential to force a player to discard 5 cards at the end of the round (it's caused me to discard 9 over the past two scenarios)! Naturally, it'll hurt big-handed investigators like Safina and some Seekers. But, in contrast, it would be a pretty mild weakness for investigators that operate with few cards in-hand.

It's also hilarious thematically. Sefina is focusing on all of the spells and tricks that she can pull off for the objectives but then she gets completely distracted by drawing the sign and forgets most of what she had been thinking about.

Phoenix1147 · 2
I love your thematic explanation! — Nenananas · 215 6/7/21
I like to hand-pick thematic weaknesses for my investigators rather than draw random, so this was actually my immediate choice for her. It really stings to pull in your opening hand! — Chiligoat · 1 7/10/21
@Chiligoat Since you seem to implying otherwise: replacing weaknesses is not part of mulliganing; it's just part of creating an opening hand. Even though Sefina cannot mulligan, she still replaces weaknesses in her opening hand (except for The Tower/Devil, obviously, whose "before or after taking a mulligan" reminder text serves as, well, a reminder of that distinction). — anaphysik · 75 11/25/21
so, if Patrice draws this, does she just discard her whole hand and then draws no cards in upkeep until it is discarded? Also, would it force her to discard "The Watcher"? — crispy66 · 4 8/6/22