: Parley. Test (3) to get information about the production from Sebastien. If you succeed, take control of 1 of the clues on Sebastien Moreau.

Forced - When the last clue is removed from Sebastien Moreau: Flip this card over and resolve its text.

He’s a visionary, but you wouldn’t want to be in his visions.
Martin de Diego Sádaba
La Strada per Carcosa #79. L'Ultimo Re #19. 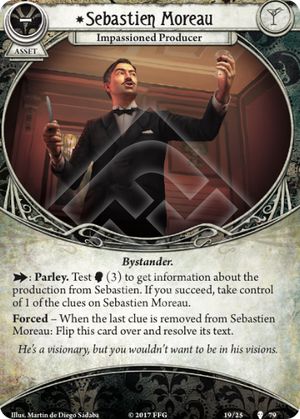 Remember that you "interviewed Sebastien."

Flip this card back over to its Bystander asset side.

You can tell Sebastien is a dramatic man from the way he speaks about tonight's production. "Better than last year! Indeed! The best I've ever seen!" You ask him whether this was the first performance of The King in Yellow he'd helped produce, and he shakes his head in vigorous disagreement. "No, no, of course not! We've done many many shows before. Paris, Florence, New York - why, this isn't even the first time the play has been performed in Arkham!" Surprised, you question him further. "Well, alright, if you must know, I had nothing to do with the previous show in Arkham. It was several decades ago, before Ward Theatre was even built. In fact, part of Mr. Engram's goal tonight was to bring the story of The King in Yellow to a wider audience!"
La Strada per Carcosa #79. 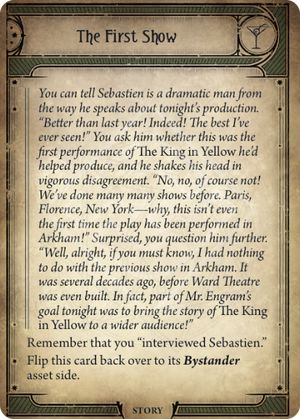