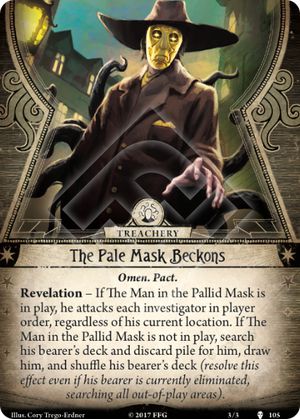 Someone pointed out that this has a wonderful interaction with counterpunch and guard dog (as well as their upgrades). Instead of going across the map to fight the stranger, it’s possible to defeat him because of the attacks he makes on you. The Pale Man may beckon, but Nathaniel the boxer sees a hand start to move and drops a hook right to the jaw. See you in the dreams!

MrGoldbee · 1242
Survival Knife is enemy phase only but works fine with the others. Gets Cho a rare mythos phase damage boost too. — SSW · 180 1/27/21
Fixed. — MrGoldbee · 1242 1/27/21
It's not clear if the Stranger is actually pale or just his mask. Clearly, this is a theological, rather than a rules, issue. — LivefromBenefitSt · 907 1/27/21
If you use Counterpunch (2) and get a killing blow, you pull the Man right back out of your discard pile, right? (scoring a tally mark and negating the attack, of course) — Thatwasademo · 43 1/28/21
Actually, I guess that same logic applies to the other reaction damage options too. The Man leaves play and so can't execute any more attacks, but then the next sentence sees that he's not in play and summons him. — Thatwasademo · 43 1/28/21
4

This card procs Occult Evidence, Astounding Revelation, Surprising Find, Shocking Discovery (which itself will cancel The Pale Mask Beckons' effect). Mandy's great in getting chosen as the bearer of the Man in Pallid Mask.