Each Serpent enemy at Serpent's Haven gets +1 fight.

Forced - After you investigate or explore while at Serpent's Haven, if you are poisoned: Take 1 damage. 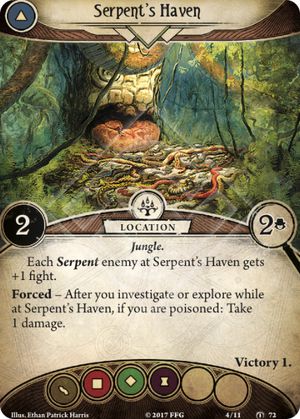 So this card lets me wonder, regarding Read the Signs: up until recently, I firmly believed, you can not ignore the trigger of the damage, because it happens after investigating. Neither could you move from Père Lachaise Cemetery after successfully "reading the signs". But I'm browsing now all the locations for a RtS review, I'm preparing, and I stumbled over the definition for Investigate Action:

If the test is successful, the investigator has succeeded in investigating the location, he or she discovers one clue at the location. (This occurs during step 7 of the skill test, per "ST.7 Apply skill test results" on page 26.)

So apparently cards, like Père Lachaise Cemetery seem to trigger, because there is a timing after succeeding in investigating within the test (which lasts until ST.8). But if "after successfully investigating" is within reach of RtS's ignore ability, this should also apply to "after investigating" in general? Weird! How are the opinions on that one? Or have there been any official ruling? (Probably not, otherwise it would be mentioned in the FAQ paragraph of RtS.)

Susumu · 211
I don't recall an official ruling, but I'd be of the opinion that any forced abilities using the investigation (or any part thereof) to define their timing point are considered to "trigger during" that investigation, regardless of whether they're "when", "if", or "after". — Thatwasademo · 42 2/25/21
(after all, Haunted, the keyword that Read the Signs was primarily printed to interact with, resolves "after applying all results for that skill test" — Thatwasademo · 42 2/25/21
Haunted works after ST.7 and before ST.8 so it's unambiguously still "during" the investigation. — suika · 8500 2/26/21
Agree with suika here. I also posted the question on BGG, and there KillBray reasoned that "after successfully investigating" triggers on the success, not the end of investigating. Seems, this was also somewhere officially confirmed. He agrees with me, that "after investigating" should NOT trigger. I wish, they had found a clearer wording, but that's what I will go now with. — Susumu · 211 2/26/21