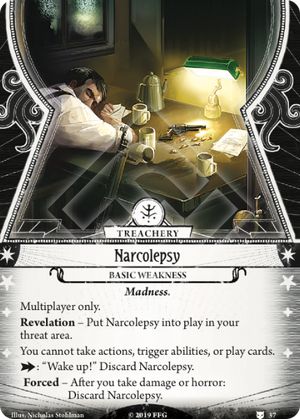 So this card doesn't seem to work as it was probably intended!

The multiplayer-only nature of the card makes it seem like it is intended for other investigators to come and wake you up when you fall asleep. In that case, the should have the added text, "Other investigators at your location can take this action." You can't wake yourself up after all (since Narcolepsy prevents you from taking actions), and as written that action cannot be used at all.

The_Wall · 231
Other investigators can interact with cards on your threat area. It doesn't need to be specified. In fact there are several other weaknesses that other investigators can resolve for you, such as hospital debts — Weirdmarine · 3 10/2/19
Weirdmarine is right here. The card works as intended — Difrakt · 952 10/2/19
As a follow-up, i feel like this card was printed specifically to draw attention to the fact that other investigators can interact with cards in your threat area, as it's not well known. — SGPrometheus · 419 10/2/19
Entombed is one of my favourites for demonstrating this interaction. Love the image of multiple investigators working together to get you out of the rubble — NarkasisBroon · 1 10/3/19
So, in case anyone else ends up going down the same damn rules rabbit trail as me, the reason you can use the action on this card is because a triggered action (like the activate action arrow), can be used by any investigator if it is (as ONE of the options, at least) "A scenario card that is in play and at the same location as the investigator. This includes the location itself, encounter cards placed at that location, and all encounter cards in the threat area of any investigator at that location." Now, weaknesses are a special type of card (aren't they always <__< ) in that , if they are an "encounter cardtype" (enemy/treachery), they are player cards when in the deck and encounter cards "while they are being resolved, and once they have entered play.", which includes the threat area. Since in your hand is "out-of-play", I assume that if a card had a revelation effect that ended with it sticking itself in your hand, other investigators would not be able to take that action; however, I don't know if this would be considered "still resolving" in this case. But whatever, as far as this card is concerned, there's the reasoning. — TheDoc37 · 450 10/7/20
2

The wording of the card suggests that the victim CAN commit skills while asleep, which is... interesting. Fits the cycle thematically, too... you're asleep but still helping your friends from the Dreamworld.

what is the consequence of drawing this mid-turn? do I just lose all remaining actions even if another player wakes me up on their turn? This got drawn in the middle of using Blood Rite so do i get to finish that action? what is the order of operations in that event?

Roakana · 1
You have already taken the action and played the card to activate Blood Rite. Nothing about Narcolepsy prevents you from finishing the resolution of Blood Rite. You don't technically 'lose all remaining actions', but you can't use them anymore so you're pretty much stuck just ending your turn and wasting them. Technically if your friend has Swift Reflexes, they could take an action to wake you up in the middle of your turn and then you could keep going. — Death by Chocolate · 627 7/3/20