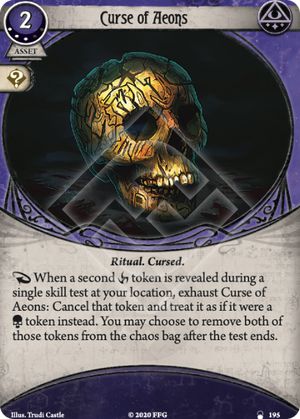 So I've seen a lot of people talking about this with Jim or this with a effect where you want a symbol like sixth sense and those are fair "wants" for curse of aeons but I'd like to bring a different approach I've not seen discussed about it.

When there are curses in the chaos bag the number you can draw is anywhere from +1 to -far too much, if you have three curses in the bad and a -4 then in that instance you can draw anything from +1 to -10, with some math's and programs you can figure out the odds, but the possibility is always there for super insane pulls where you draw 3+ curses.

Not so with curse of Aeons in play, how many curses are in the bag? irrelevant!, the worst draw you can pull from the bag is now always -2 AND the worst token in the bag, in the above example even with 10 curses in the bag you can only draw a -6, which as a mystic is not that hard to overcome with commits, rogues also will find a -6 beatable if they HAVE to pass.

What Curse of Aeons does is allows more reliability with the "uhoh all curses" table, sure blessing of Isis is cool in its own way but just knowing that even with a whole ton of curses floating about there is now a non insane number you can match to succeed at any test is very liberating.

And like with such classics as lucky, curse of aeons need never actually trigger once to still be useful, did you go an entire game and never trigger its effect with a curse heavy bag, well 3 xp and 2 resources to not suffer for high cursed bags seems A-Okay to me.

It seems that Curse of Aeon helps you to find for Sixth Sense, or Song of the Dead. However, this card is too hard to utilize with thoes cards. What's problem?

Of course, there are some advantages of this card: