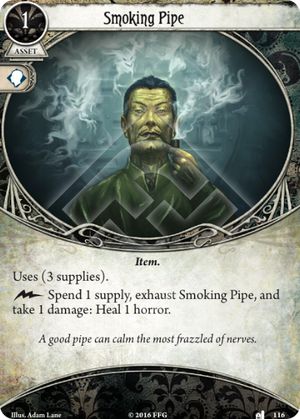 First, a quick rant; Fantasy Flight Games, why u no make it direct damage? This card (and it's counterpart Painkillers) are incredibly cool thematically; the concept of self-destructive habits is one that breaths even more life into our pseudo role-play of the investigators we build decks for. It legitimately saddens me when I consider that Rita's athletic career might be compromised by the as of yet not understood effects of smoking on the lungs. It brings me great satisfaction when I outfit Roland with a Trench Coat and a Smoking Pipe and complete the gritty noir-detective look.

Then the Painkillers-Peter Sylvestre combo became a staple and the horrific tragedy of it all disappears like so much lovecraftian-lite confetti. Muh immersion. MUH IMMERSION!

To be clear, I am not being serious; I know full well that a card game like this, with a million moving pieces, is not going to keep a straight face in the face of all the possible combinations. I've already accepted that this isn't always going to hold up as a grim horror experience, especially when I held off an eldritch god with two Attack Dogs for six rounds, that one time. Still, would have been nice.

Anyway, the review. You consider Smoking Pipe when you're playing a 9 health, 5 sanity investigator. That's it.

Okay, okay, I'll elaborate a bit: Smoking Pipe and Painkillers have one very obvious drawback; being defeated from damage or from horror holds little distinction. While you can assign damage to non-critical systems through these cards, they require that you've got a big difference in your remaining health and remaining sanity in order to have a noticeable effect in your survivability.

You might think that's the reason I'm recommending 9 health, 5 sanity investigators take this card, but that's only half the story. The other half is that the statement "being defeated from damage or from horror holds little distinction" does not hold for these investigators because mental trauma hits much harder and physical trauma hits far slighter. Starting with 8 health or 9 makes little difference; starting with 4 sanity or 5 does, and should be avoided at any cost.

So, other that the aforementioned Rita Young and Roland Banks, you should consider Painkillers when you play:

Lucaxiom · 2904
I'm going to also advocate for this card in Diana. Diana is a Mystic who loves Arcane Research, but taking it means she's down to 5 starting Sanity. You can throw in a lot of cancels of course to help with that, but playing Diana is risky and has a tendency to throw horror on you. Smoking Pipe helps with this. Also, it is a good way to kill Arcane Initiate or David Renfield. — StyxTBeuford · 12540 11/15/19
I'm going to assume that you meant "Smoking Pipe" when you said "Painkillers" at the end of your review there. Yea, I've been running this with Mark and it's been doing wonders for me. Not only is it actionless horror healing, but I can easily assign the damage to myself or one of my numerous damage soaks, and then also proc an extra draw for me. Worst case scenario, I can just keep doing this during different phases, healing 3 horror, and draw 3 extra cards in the same ROUND, it's fantastic. — TheDoc37 · 455 2/22/21
@TheDoc37 unfortunately you exhaust the pipe after use, so it's — NotSure · 8 6/4/21