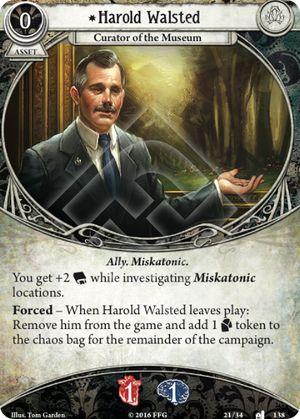 Spoilers for Miskatonic Museum abound, but you probably knew that already!

I've been considering the two different helpers in Miskatonic (Adam Lynch) being the other) as I consider an optimal playthrough type run.

I think that Adam is pretty much inferior across the board, with a couple caveats:

In either of those cases, Adam will be marginally more useful - he'll allow you to skip over most of the exhibit halls other than doing the bare minimum to get clues, saving you 1 per (using the Security Office as a single rather than , or as compared to just sending your clue-sweeper in to each Exhibit Hall, with the possible consequences of revealing them.

Both Allies have the same 1/1 statline and the same "Oops, I let an innocent die, take a bad token" penalty. So you're looking at the bonuses they give.

Harold Walsted is a +2 investigate in all Miskatonic locations (which is going to be every location in the scenario). Whoever you're playing, a +2 investigate boost is going to be useful. For Rex Murphy you're significantly more likely to double up on clues. For anyone else, the ability to forgo throwing cards or resources or actions at your investigate checks (The majority of the locations are Shroud 2 or 3, so a +2 on top of the 4 or 5 you're bringing puts you easily at +2 or +3 for your tests), especially in a scenario like MM, that is often timed by the number of cards remaining before you take 10 damage, is huge! And for most seasoned players, clearing clues off all the locations is going to be key, because that's where the sweet XP lives!

On top of that, Harold comes from the Breaking and Entering side of the Act, rather than the Night at the Museum side. For investigators that are trying to maximize clue gathering, breaking down the door is going to be the method of choice anyway, to keep those 2 starting clues for immediate use in the Museum Halls.

The Security Office has two possible options - to search your deck and draw or to look at Exhibit Halls. If you're clearing all the halls, knowing which is which is helpful, but not worth the actions it would take. So if you get the right Security Office, Adam lets you spend 1 less action to search and draw. Which, to be clear, is pretty neat! But he costs you two clues, which are the key resource to discovering what's going on! So 50% of the time he'll save you 1-3 actions, depending on what you're digging for in your deck.

Harold, on the other hand, is going to trigger repeatedly during the game, since you're looking to clear 5-6 clues to open all the halls, and then clear out the Exhibit Hall

The only real upside Adam has is that's the most trope-y of individuals, being the completely new security guard at the haunted museum who is definitely going to get eaten by the monstrous horror at some point in time!

Ergonomic Cat · 23
The two things I think you are failing to consider is (1) timing and (2) diminishing returns. 1) While Harold May be mechanically stronger, you don’t get him until the END of Act 2, while you get Adam at the START of Act 2, so while you CAN use Harold on all of the exhibit halls, you’ve likely already cleared many of them. 2) Most teams will be designed to already have sufficient clue gathering. Yes, you can put Harold on your mediocre or flex investigator who was at 3 or 4 to put them afely +2 above most shrouds, your cluevor at 5 or 6 native is going to get very little value from the additional +2. — Death by Chocolate · 12 9/17/19
My group usually clears all locations of clues for victory X. Harold was mostly useles because the seeker had her int boosts in play already and didn't need anymore. — Django · 2128 9/18/19
Honestly they both kind of suck. They're meant to be liabilities. — StyxTBeuford · 610 9/19/19