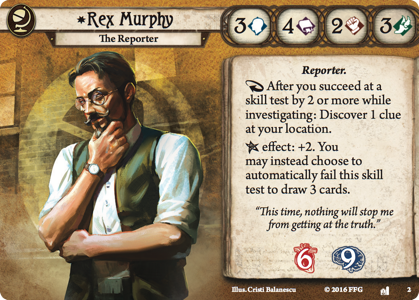 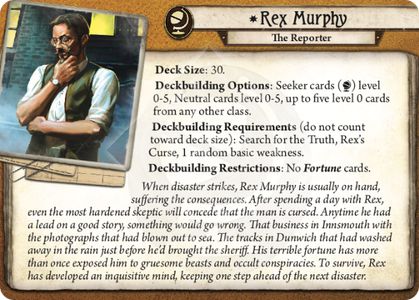 I don't normally leave reviews, but having the only review of Rex be negative just seemed wrong.

Rex is currently one of (if not the) strongest investigator in the game, and most of the community on places like Reddit, Facebook, and Discord agree (to the point where many people consider nerfing him in one way or another). While he definitely does have limitations, I'd like to go over exactly why Rex is top tier right now before I Delve Too Deep into his weaknesses.

To talk accurately about Rex, we first have to talk about Higher Education. Higher Education is without a doubt the most influential card in the game right now, as it drastically powers up the investigators who can take it (Rex and Daisy at time of writing). It provides both consistency and efficiency that's unparalleled in other classes, and the 5 card requirement is often negligible for Seekers who excel at card draw.

Higher Education is particularly important to Rex due to his passive ability, which is the main thing that takes him over the edge. Rex's passive allows him to save actions by picking up extra clues, and with no limiting factor he can potentially do this multiple times a turn. His naturally high of 4 and the boost from Higher Ed. means you can guarantee yourself a high probability of grabbing 2 clues over and over again. In 2-4 player games, Rex can hoover up all the clues almost single handed.

The seeker card pool is perfectly suited to helping Rex go on a rampage. Dr. Milan Christopher helps him keep the Higher Ed. engine running, Magnifying Glass naturally works well with Higher Ed. as well, and Preposterous Sketches + Search for the Truth (and the occasional effect) provide hand filling support right from level 0. Splashing for Burglary can keep your pockets full while still grabbing clues due to Rex's ability, and being flush with cash makes Rex almost immune to any based treachery effects. Not only that, but having almost unlimited boosting capabilities makes Rex's Curse almost a non-factor.

Ok, so Rex has strong synergy with strong cards, but you might be asking yourself: can't the same be said for other 'gators too? Well, not really.

The difference is that almost all other 'gators are naturally limited in how often they can use their abilities. "Skids" O'Toole, Daisy Walker, Jenny Barnes, Marie Lambeau, and Roland Banks all have abilities that work only once a turn. Wendy Adams and "Ashcan" Pete can use their powers at the cost of cards, which are a limited resource. Similarly, Agnes Baker is limited by both time (once per phase) and her sanity. The only other 'gators without limits are Jim Culver (who has a low impact ability you can't play around) and Zoey Samaras, who is limited by the existence of enemies in the first place.

Rex is really the only 'gator who has no limit on his ability. He can theoretically get six clues in one turn, saving a total of three actions. This kind of efficiency simply isn't possible with other 'gators. And Rex currently has the card support to make this insane action efficiency a reality with stunning consistency.

But Rex does have a weakness: solo mode. Not that he can't hold his own, in fact I think seekers have more than enough help dealing with enemies through cards like Mind over Matter, "I've got a plan!", and Disc of Itzamna (which Rex can Scavenging back). Rather, Rex is heavily weakened by solo mode because there are simply fewer clues to grab. Any 1 location is "immune" to his powers, and generally speaking he won't be holding onto a ton of clues at once for things like Search for the Truth.

Still, I hope I've been able to illustrate just why Rex is insane in 2+ player games. As long as he's got a buddy to guard him, Rex makes short work of any clue-based scenario (which is quite nearly all of them).

DO NOT PICK HIM! Use the Librarian instead because here comes the hate.

Hand's down Rex Murphy is the WORST investigator in the game (through Blood on the Altar). First of all, Rex's Curse is absolutely brutal. I cannot overstate how crippling his unique weakness is. You will doubt every decision you make while it's out, and it never really goes away. This transforms your turn into a painful and tedious experience, rather than a challenging risk/reward analysis. If you do manage to get rid of it (strategically failing?), then the likelihood of you drawing it again only increases as your deck gets thinner and thinner. Not being able to add fortune cards is just a slap in the face. Secondly,hHis investigator's ability is rarely triggered and is only useful at locations with multiple clues. Thirdly, "Oh hooray! I drew the Investigator Token! +2 or autofail to draw three cards?" Sheesh.

But what about his special card, Search for the Truth? Sure, it has three skill icons, but look at that ability. It only works when you stockpile clues - the exact opposite thing you want to do in this game. And you only get one use out of it! It's almost as if Rex was an inside joke at Fantasy Flight. Rex "Resign or Die" Murphy.

I thought I'd be getting into an exciting challenge by playing as Rex in standard solo mode, but I can't even get past Midnight Masks with him. I dare you to play him solo in The Midnight Masks scenario. If you can complete that scenario with more than half of the available victory points, then please please please post your deck. I've given up on him.

Okay, first off start with the basics. everyone knows that you shouldn't do Rex Murphy solo. You have been warned.

2ndly, it is really hard to get all of the cultists in midnight masks.

When playing a game with Rex Murphy you need to consider the following: 1. do I have someone to cover me? 2. is this scenario about clue gathering? if the answer to both of these is yes, then you will be pretty successful.

Rex's curse: To bypass the effects of this, what you need to do is always stack the odds in your favor. Have higher education and 5 or more cards in you hand with plenty of resources to feed it. It also helps if you have lots of cards that you can commit. this way, once you draw the second token you will have a very good chance of success.

Rex is all about clue gathering which makes him awesome for scenarios like Essex county express. There will be some monsters that your buddy can't get to fast enough so you want to pack I've got a plan.

hogwashed · 2
also, I will be releasing a Rex Murphy deck that I have been working on as soon as we finish Dunwhich Legacy. — hogwashed · 2 3/1/18
Rex solo is a waste of his ability, as there's often only 1 clue, so don't get to use it. The more players, the better his ability gets. Anything that makes him move for free is great to make more use of his ability. — Django · 2135 3/2/18
you mean like shortcut and quick thinking? — hogwashed · 2 3/3/18
There is Rex Murphy trick that you can pick up two clues with one action. (Django refers to it) Like Shortcut and Pathfinder. It turns Rex into a strong Solo character. Explained: You do a search action in one location. You succeed. Then you play shortcut. You know find one clue in the first, and one clue in the destination location. — aramhorror · 254 3/15/18
To clarify this a bit more: Wherever you initiate the Investigate action is where you're committing to pick clues up from. So, for example, if you started an Investigate action in Room A, you will only pick up clues from Room A. However, Rex Murphy's action triggers when a skill test while investigating succeeds by 2 or more and it only cares about where Rex Murphy is at the moment! — Darthcaboose · 115 9/13/18
@aramhorror @Darthcaboose It took me a bit of reading cards and rules to wrap my head around this combo, but in the end I think it works mostly as described. The one key detail you both left out is that you have to gamble a bit since the only free trigger windows between initiatiating and completing the test happen BEFORE the token is drawn. You have to commit to the Shortcut or Pathfinder before you know the results of the test. — Death by Chocolate · 12 11/22/18