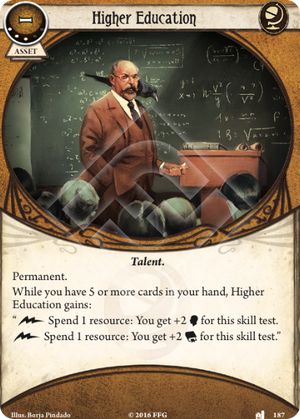 A popular pick for strongest card in the game. I would certainly agree with that.

Higher Education's ability is exceptionally consistent and powerful. Spending a resource for +2 to a test is a terrific deal. I mean, some people spend two resources and an action to play cards that grant an ability that's half as good as what Higher Education does. Once you have Higher Education in play, with a bit of planning you can get great odds on any Will test or Intellect test you want, even on Expert. That's awesome. And then there's the consistency of this card. Higher Education is transformative every time it's in play, and it will always be in play after you buy it. The rules literally do not allow it to leave play!

The two stats boosted are usually the two most useful for Seekers. Being able to turn every resource in your pool into a quasi-Guts offers excellent protection from the encounter deck's Will treacheries. That's not even the best use of this card, though, which is to use the Intellect boost to easily crack even the most difficult locations.

There is the hand size requirement. But this is not too hard to work around. After all, you start the game with the condition met, and it's not too onerous to average playing around one card a turn and keep your hand around five cards. It helps that once you have Higher Education you don't really need a whole lot of other assets to go with it. (Though Dr. Milan Christopher and the upgraded Magnifying Glass are nice bonuses if you draw them.) You can also find plenty of card draw in the rest of the Seeker card pool, if you feel it's needed. Even if you don't radically adjust your playing style to fit Higher Education and only find it active, say, half the time, it would still easily be worth 3 XP.

This card is at its most disgustingly broken with Rex, because it allows Rex to pretty easily trigger his investigator special ability even on Expert. Once Rex starts triggering that multiple times a turn, the investigators can advance through the Act deck way faster than the designers possibly could have intended.

It's also very good for Daisy. Lots of Daisy decks try to run Mystic spells like Shrivelling. This used to be pretty weak on high levels because of Daisy's low base Will, but Higher Education single-handedly makes these Daisy builds good. Daisy's free uses of Old Book of Lore are also nice, since they make the hand size requirement trivial for her.

Minh is a much more awkward fit with Higher Education. Her playing style typically involves committing lots and lots of cards, which quickly empties out her hand. And she doesn't have Rex's ability or Daisy's spells that make Higher Education all the more rewarding. Even so, she should still probably buy Higher Education sooner or later. She doesn't have to use it that many times per game for it to be a good use of 3 XP. (Minh could even run Dark Horse, which goes well with it.)

In all, I'd say no card is currently more powerful or game-warping than this one. It could cost 10 XP I would still recommend buying it, at least for Rex and Daisy. At 3 XP, it's a steal.