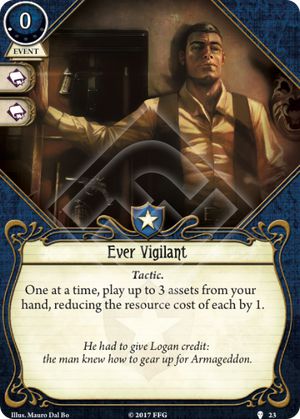 In case it wasn't obvious, this card has great synergy with Backpack (especially Backpack (2). You can play the Backpack as the first or second asset installed by Ever Vigilant, resolve the Backpack's install reaction (searching the top of your deck for up to 3 more items), and install one or two of the items from the Backpack at a discount with the remaining Ever Vigilant install(s).

Generally, it's most optimal to install items from the Backpack rather than your hand (especially duplicates), to preserve cards that you can commit and free up your body-slot as quickly as possible.

Wastekase · 8
I'm having trouble digesting this. So Backpack lets you play cards as if they were in your hand and Ever Vigilant plays cards from your hand. These are different things, are they not? — Lateralis · 6 9/25/20
The most recent FAQ did a lot to clarify the vagaries of the rules phrase “as if.” At present this card, and farsight from Harvey Walters starter deck plus joe diamond’s hunch deck are still two significant open questions. There isn’t firm consensus on either interaction but my 2 cents is that this is an intended combo. These cards are considered in your hand for — Sycopath · 1 9/25/20
Purposes of “playing cards” which ever vigilant does. It’s not altogether clear how narrowly the as if ruling is — Sycopath · 1 9/25/20
To be interpreted (characters characters, why is go so easy to hit on mobile, characters) — Sycopath · 1 9/25/20
I don't find a clear info, does this card triggert 3 attack of opportunity if you set 3 assets with it? — el_kloklo · 1 2/8/21
@el_kloklo No, the attack of opportunity would only trigger once, before any of the effects of the action (in this case, playing Ever Vigilant to play 3 assets) resolve. — Steights · 1 2/17/21
separate issue. can a triggered effect (backpack enters play) interrupt the resolving effect like that? can anyone point me to a ruling to that? I think the timing is that you have to finish playing 3 assets before you search for your backpack. It combos fine if you play backback before hand but not as the first asset you play from this card and two subsequent cards from the backpack pile. — theatog · 1 7/19/21
@theatog it specifies one at a time, meaning you do place them in an order. I believe as soon as you place backpack (which happens while this cards resolving), you search for items and place them in the backpack. A ruling that wouldn't let you search would be if the card placed all three assets at the same time. — Vultureneck · 71 9/3/21
6

I really like this card, although it really isn't for every deck.

This card plays well in decks that run about 1/3rd of their deck as asset cards and plays best with a mix of semi-permanent cards (like the machete) next to cards that are designed to get used (lantern/beat cop/knife).

It also alleviates the classic problem of the core set talents, in that it almost entirely negates the tempo hit for playing them out.

Its also good in investigators with draw (Mark).

It has synergy with Laboratory Assistant (play it first, draw two cards. Then play a few other cards).

Late game this card can be pitched to an investigate or parley test.

Really, my only problem with this card is that Guardian builds right now do not have all that many assets that are "expendable". Most guardian builds are expensive and use minimal actions to set up a weapon, an ally and maybe some other asset to help. In this classic build, you are pressed for time for anything else. Ever Vigilant gets you additional gear when you have those spare turns with an action but no idea what to play.

Watch this space. This card will certainly become more useful as guardians (and other classes) continue to gain new assets.

Myriad · 1127
Also worth noting that with the release of "Stick to the Plan", this card has become much stronger as it can now be guaranteed to be present in an opening hand. It also has great synergy with a Charisma deck that runs many expendable allies (such as Roland or perhaps Yorick). — Low_Chance · 6 5/2/18
5

Pretty mediocre card in the average deck, but certain decks will launch the power of this behemoth into the stratosphere.

The average spends a few actions playing assets, and a good number on taking resources, Ever Vigilant saves you 2 actions and 3 resources when you hit 3 cards, economy cards are varying degrees of good, but this cards is very literally just a conditional Ace in the Hole, a 6 xp finisher for 1 xp!

The trick is finding the assets to play, it's not unusual to have 30-50% of your deck made up of assets, but drawing some of those, 3 of those, as well as a copy of Ever Vigilant, that can be a tricky challenge indeed.

Insert for the combo goodness:

That's it, these are the main combos, and they are VERY, VERY good.

You get bonus points if you:

Tsuruki23 · 2152
You can't play multiple cards from under the Plan in one round, but I agree STTP and Ever Vigilant is a great combo for asset-heavy Guardians. Playing as Carolyn right now and have Emergency Cache (3) under there to load up Painkillers and Fingerprint Kit, with a rotating special like a D-Blast as 3rd. But as far as Ever Vigilant goes, that combination plus 2 copies of Stand Together, along with serious mulliganning to start your game, is a great, great combo. — Krysmopompas · 257 12/13/19
3

Note that if you're playing Lola this does not allow you to play non-guardian cards while you are guardian. You can play this card, and it can even target non-guardian assets, but since it makes you play them it doesn't work. This is different from Sleight of Hand.

Sechen · 52
Just got through testing this card in a Yorrick deck on Midnight Masks (twice) and Curse of the Rougarou. What an immense difference this thing makes if it's in your opening hand. Sick setup. I really like it. — crymoricus · 230 1/5/19