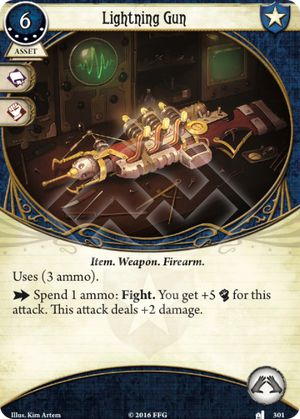 The more I play Guardian, the more I find myself turning to Lightning Gun as the best upgrade path for multiplayer Guardians. It is so good against the Expert chaos bag that if I don't build for it, I end up wishing I did. The +5 bonus means that with only modest further boosting you can crack the -8 token on every shot. The +2 damage means that you have to spend fewer fight actions to kill things, which means fewer pulls from the chaos bag and more actions left over to do whatever you need to do.

Of course, Lightning Gun very much demands to be built around. You must have ways to reload it in your deck--Extra Ammunition and Custom Ammunition are your best in-faction options here, and both are worth it. I think Venturer is fine, and I might run one or two. But my first choice would be to play the ammo events and use my ally slot elsewhere.

I recommend supplementing Lightning Gun with extra-damage effects--Beat Cop II and Vicious Blow are the most important. These save you ammo, skill tests, and actions by letting you kill 4-health (sometimes even 5-health) enemies in one action. Beat Cop II will also spare you from having to use Lightning Gun on something dinky like an Acolyte or Whippoorwill.

Beyond that, Prepared for the Worst to tutor Lightning Gun is very helpful, as is Stick to the Plan so you can start every game with that and other support cards available.

You were probably running Emergency Cache in most of your Guardian builds anyway, but it's as necessary here as anywhere else.

One support item I generally omit is Bandolier. I don't think there's a huge advantage to having the third hand slot, and Bandolier + Lightning Gun + another hand item is needlessly expensive. That said, you do always want additional assets in play to go with Lightning Gun. Otherwise you'll risk losing your Lightning Gun to stuff like Crypt Chill and Pushed into the Beyond, and that would just be disastrous. Just use assets that don't take up hand slots.

I would skip "Eat lead!" most of the time--the guaranteed hit is nice, but spending extra ammo and 2 XP isn't. Maybe if someone is packing Double or Nothing this becomes better, but it's probably still a low priority.

Make no mistake, this is a very greedy card. Most of your resources and much of your deck space will have to be devoted to it. It will take up a ton of XP, in a faction that is entirely devoid of XP acceleration. Attractive XP options like Stand Together will have to be significantly delayed, if you ever get to them at all.

But the upside is that a properly supported Lightning Gun will be outstanding at your primary task of blowing up enemies. You will do that far more efficiently and reliably than you otherwise could. Plus, when it comes time for a boss fight, you'll be ready.

CaiusDrewart · 2229
I'm with you on lightning gun! Zoey wants her blessed lightning gun to hunt monsters! The combo with venturer can work with Leo though and he can have the XP boost with Charon's obol! — mogwen · 217 9/19/18
@mogwin: Yep! I'm not a huge Charon's Obol fan but Leo is at least tanky enough that he could seriously consider it. If I were pursuing this build as Zoey, I would definitely take Delve Too Deep. — CaiusDrewart · 2229 9/19/18
Yes, good idea! And Father Matteo could give her dustom munitions, I like the idea of the religious party! — mogwen · 217 9/19/18
Note that e.cache 3 can recharge venturer for more ammo. Other players can use it on your venturer as well. — Django · 2996 9/19/18
Venturer does a lot for low ammo, high damage output weapons like this. Especially with other reload options. Lightening Gun is definitely the gold standard for big guns. — Myriad · 821 9/28/18
Updating this review: while my opinion of Lightning Gun is more or less unchanged, I almost never buy this card nowadays. Flamethrower is just better. — CaiusDrewart · 2229 9/9/19
6

Big shiny guns, big scary price tags. Lightning Gun is for the discerning Guardian who wants to never worry about enemies ever again. Well, at least until it's ammunition runs dry.

Upsides: +5 allows you to ignore nearly any token for most fights, and for high enemies even half of the bag usually is success. An easily overlooked upside of this is that LG shots almost never miss, making them more efficient than other ammo weapons.

3 damage will kill most enemies, eat up bosses and allow you to save your vicious blows to kill 4 health enemies. No other weapon can do that. The Shotgun can do more total damage, but you can't tailor it to a specific number which means risk.

6 money is a tempo hit. Not, mind you, that much worse than .45 Automatic or Machete, but it is a hit.

5 exp is expensive, not much else to really say about this.

2 hands means you either need to ditch your other items or fish for a Bandolier. This isn't as bad as it sounds, as the bandolier only has to be in play before you play LG and your Flashlight but it's still a deck slot and some actions to put that together.

Personally I think it's effective. The ability to know enemies are almost certainly dead in one action is wonderful peace of mind. Still, you can't just purchase this on a whim, a number of support cards are required to make it particularly effective. It's also just plain fun.

Difrakt · 843
Good review. I like Lightning Gun, but I've yet to try it in a solo deck. I went for the Shotgun in my Zoey Dunwich campaign because it is ultimately cheaper (1 exp or 1 resource can sometimes be the difference between a free action and not), and the ability to immediately kill anything regardless of HP saves me so much time in the end. Lightning Gun is good, but if it's not enough to take down some of the heftier enemies, thus with VP typically, then it really hurts to have to spend yet another action and another ammo to finish it off. At that point, you definitely will be packing Bandolier anyways. To each their own. — LaRoix · 187 4/27/20
5

Not much beats this weapon for dominating as a combat character. The steady +2 damage and a modifier that all but guarantees successes makes this expensive killing tool unusually flexible.

Here's a comparison: You're Roland, with your .45 Automatic you aim to kill a Ravenous Ghoul, you're 2 above the required skill check, you lay down a Vicious Blow to net you a clean kill and spend 1 on Physical Training to hit that sweet spot of +4 over the skill check, and even then on higher difficulties you might throw on another just in case you get that -5. And boom, the Ghoul is gone. That there cost you: 4 for the gun, 2 for Physical Training, 2 and an action to play Physical Training in the first place, and a Vicious Blow as well, end cost: 3 cards, 8 resources and the extra action. You will be able to fire the gun 3 more times, but you wont kill any 3 hp enemies in one shot.

Now the lightning gun. One shot, aaaaand DONE. That set you back 6 resources but you're geared to do this two more times without having to pay for any boosts or playing extra cards!

Of course it wont be that simple, with a gun that big in your deck you will want to bring Prepared for the Worst to search for it and Extra Ammunition to keep it firing. You still want to draw into Vicious Blow to deal with those 4 HP enemies and the initial cost will inevitably slow you down in the earlygame.

This card does exactly what it should do and has all the drawbacks that it looks like it's got, it's a big unwieldy boomstick that will never disappoint you, but setting this up mean's you wont be doing much else.

Other cards that aren't immediately obviously good with this card: In class: 1) Dodge and Prepared for the Worst are a big help against bosses, they essentially let you set a trap for a hunting enemy where you get a full round of emptying this gun at the foe, useful in some specific missions. 2) Stand Together, this is effectively a second set of Emergency Cache, the key benefit here is that you usually only go for Lightning Gun when you have someone else doing the clue gathering, in which case you can give them a big buff while you set yourself up. A perfect first turn would be playing this into the lightning gun and immediately playing it. 3) Beat Cop, Lightning Gun is wasted on 1 and 2 HP enemies, Beat Cop helps you mitigate these enemies.

Out of class: 1) Quick Thinking is often all but a guaranteed action. Good if you need to wade into a big fight or need to accomplish something after it. 2) Drawn to the Flame and Scrying. You don't do much when you're totally focused on fighting and there are no enemies to zap, these cards let you guide encounters onto yourself. 3) Pathfinder and Shortcut. Entering a fight quickly can be key, perhaps you need to spend an action engaging a foe or perhaps you need to fire all three shots to down a foe in one round.

Tsuruki23 · 1726
I agree with most of this, but I don't think Quick Thinking is a good combo - spending one card to get one action is only marginally useful, and at Combat +5 it's pretty unlikely that you want it for its ? symbol. Double-or-nothing is a vastly better Rogue combo for Lightning Gun. — sfarmstrong · 130 6/26/18
2

Combos very nicely with Venturer cards. Venturer is not only a sanity/hp soako but allows you to distribute his 3 supplies/ammo between different assets. Basically, if you have venturer and lightning gun, he pretty much doubles the amount of bullets.

Another great card is Extra Ammunition - straight up + 3 ammo to a Firearm card like this. 2x Venturer + 2x Extra Ammunition, and you have lots and lots of +5 Strength +2 damage attacks. OUCH!