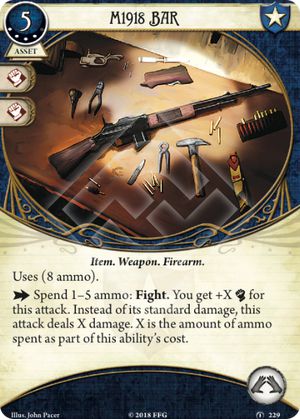 Magnificent. Introducing the Browning Automatic Rifle, a weapon that lets you spend exactly as much ammo as you need to one-shot the enemy.

I think the most obvious card to compare this to is Lightning Gun, and I think they tend to be neck-and-neck. The key here is that the Lightning Gun's insane +5 bonus is usually more than you need, given that every character who can buy this already has at least 4 . Mark Harrigan in particular is going to prefer the BAR's more judicious approach to spending ammunition.

The BAR seems to just generally love Rogue cards, actually. Even Double or Nothing, a card I'm not ordinarily fond of, can seriously up its game in a BAR deck, where its chances of producing a 10-damage strike are much better than with Shotgun.

In all, the Extra Ammunition problem prevents the BAR from being quite as good as the Lightning Gun, but it's not quite as expensive, either, so they're roughly in the same tier. (Lightning Gun pulls ahead on Expert, though, because its +5 becomes more relevant.)

The BAR seems so powerful for Leo that I think it's my automatic first upgrade if I ever run him.

sfarmstrong · 62
Lightning Gun seems better with Sleight of Hand unless you are going for 1 action burst damage. LG can do more overall damage, and is always more accurate over all shots. Contraband still doesn't seem worth it because it takes at least 3 ammo to make an effective shot. — Urgergaberg · 1 9/14/18
Dont forget custom ammunition. — Tsuruki23 · 885 9/17/18
Would this get the extra damage from custom ammo. Depends when the extra damage is calculated, I guess... — Urgergaberg · 1 9/17/18
Do i get this right, this weapon's effect replaces the 1 damage all attacks do? Or is the damage equal to ammo spent in addition to that? — Django · 2208 9/18/18
Yes, you will only do damage equal to the ammo you spend on the attack. — Urgergaberg · 1 9/18/18
It's pretty close with Lightning Gun, but yeah, I'd generally prefer BAR. I expect that it will be more common to want to spend two actions to take two +4/4 shots, or one +5/5 shot and one +3/3 shot, than to spend three actions each taking a +5/3 shot. For one thing, you could very well need the middle action to move so that there's something to hit with the second attack. The third shot with Lightning Gun will usually be wasted outside of a boss fight, and in a boss fight dealing nine damage in three actions isn't necessarily better than dealing eight damage in two actions. The BAR is especially at an advantage against four-health enemies, which are quite common. I'll stand by my claim that BAR is the best Sleight of Hand combo to date but, again, I do recognize that it's close. I'll also reiterate that Lightning Gun is the champ on Expert. — sfarmstrong · 62 9/20/18
Am I the only one who doesn't like this card?? The only way to make this card worthwhile (aside from the Sleight of hand combo which is quite strong I must admit) is to play it in conjunction with Contraband. That leads to 2 issues: The first is that it's only viable for Leo or Zoey who are the only Guardians who have access to Contraband (along with Sleight of Hand). The second is that you actually have to be sitting on at least 9 resources and have the actions to spare to play both the BAR and the Contraband before starting to use ammo (you wouldn't want to waste Contraband ammo so you really want to play these cards together). When you run weapons like Shotgun or Lightning Gun you always pack extra ammo with you to make them more efficient and reliable. The same can be considered with BAR, so I really wouldn't run this if I don't have Contraband. — matt88 · 1105 9/20/18
And I probably wouldn't run it all. — matt88 · 1105 9/20/18
No, matt88, you aren't :) One is right - it is the best weapon to deal burst damage. That's all. This weapon is flexible, but for 2-3 shots. What next? The answer is not that simple like with LG. BAR has some sweet synergies (Custom Ammo, Contraband), but again - they must be played before the first use of that weapon, so they need a huge initial investment. LG is much more straightforward - pull it, kill things, reload with extra ammo, still being a weapon with the best use of 1 ammo, much better than with BAR. I would always want LG first, BAR could be second heavy weapon with green Zoey and Leo. — KptMarchewa · 1 9/21/18
These problems all seem very manageable to me. I mean, it kind of seems like you're comparing the value of LG in an LG-optimized deck vs. the value of BAR in... an LG-optimized deck. Extra Ammunition and Experimental Ammunition are wonderful cards, but add those to LG and a Level-2 Beat Cop, and - let's face it - Stick to the Plan, and you're looking at a massive commitment of XP and resources. You can get a decent BAR deck up and running in just a scenario or two, and having the extra XP to buy Stand Together or (for Leo) Level-2 Hot Streak will do a pretty good job of mitigating the higher up-front resource cost. Obviously, a 25-XP LG deck is going to outperform an 8-XP BAR deck, but I expect I could build a pretty damned impressive 25-XP deck if I favoured BAR. — sfarmstrong · 62 9/21/18
@sfarmstrong Can you give an example if a 25-XP BAR-centered deck?? — matt88 · 1105 9/21/18
@sfarmstrong I meant: ... of a 25-XP BAR-centered deck?? (Sigh!) — matt88 · 1105 9/21/18
I don't think you need to have 25 xp before the LG or BAR are good. They are both good in their own right. The problem is the support cards that synergize with BAR fewer and/or weaker. Both of the ammo cards are weak with BAR. The BAR requires 3 ammo per shot to be better damage than level 0 weapons. So Extra Ammunition gets you 1 more shot. Custom Ammunition is slightly better because the extra damage will save you ammo but only if you are fighting a monsters. At 3xp and 3 cost, I think that is worse than Contraband (not hard math, just how I feel about it). At 9 resources, that combo seems unplayable. BAR is still really good with Sleight of Hand for the exact reason sfarmstrong brought up, it would save you an action when fully unloading it. If 10 damage from the BAR or 12 damage from the LG is needed will depend on the situation. But LG is also more XP, so its acqusition is slightly slower. So it is possible you can pick up a BAR earlier in a campaign, so that is something. I think in the end the BAR is good, it just has weaker synergies than LG. — Urgergaberg · 1 9/21/18
@matt88, I'm not prepared to put together a complete deck yet, but I would have enough XP to get Stick to the Plan and two copies of Stand Together, plus maybe "I've Had Worse". That would give me a strong opening and reliable economy - I basically end up with a deck that wrecks enemies nearly as well as an LG deck, but I've got more reliable resource-generation and card-draw. — sfarmstrong · 62 9/22/18
https://arkhamdb.com/decklist/view/7630/leo-s-bar-25xp-1.0 25xp dream first turn: Bar with 16ammo — Fireblaze · 2 10/20/18
1

So I've had the chance to use this in Dunwich now as Zoey, and I was pretty dubious at first but I think I really like it. I didn't even combo it with any of the ways of getting extra ammo. Ok, the obvious thing to say - in most cases the Flamethrower is better and for various pretty clear cut reasons. But anyway, I had one Flamethrower already and so I got a BAR just to mix it up and try some new stuff and was pleasantly surprised.

Basically, got two rules wrong there. Flamethrower wins that one.

I did get to use it in a more piece-meal way later and the ability to take out a creature with exactly the right amount of health all in one action is pretty strong, stronger than I realised. If you end up spending lots of ammo on a tough monster, you also get a much higher modifier - so it actually scales really well for larger creatures as you're more likely to make the damage stick. To be fair though, taking only one action only really applies to big monster of four or five health, and then you're likely only to get one of those out of the ammo supply.

Another nice point is that with the Flamethrower, a couple of times I found myself wanting to engage more enemies to fully utilise the damage, but that would incur an attack of opportunity. Without the damage efficiency the value of the Flamethrower goes down (though it's still great obviously). Perhaps I should not have swapped out those Taunts earlier? But then we're talking support cards which essentially increases the cost of the weapon. BAR on the other hand doesn't suffer from that problem - exactly as much as you need all in one action. The sheer damage output of the Flamethrower means it still holds up really.

The comparison is more relevant for the Lightning Gun as you really need that second weapon to deal with the monsters with four and five health. This is of course means you need a Bandolier, so support cards again. With two four health monsters you can kill them both in two actions with the BAR. With Lightning Gun you can kill one and damage the other in three actions. Flamethrower says "hi" at this point of course, which is why it's still better, and what it potentially loses in the action efficiency it makes up for ammo/damage supply.

Lastly, I frequently find myself at four XP after a mission too, so this one just feels significantly easier to pick up, even though it's only one XP cheaper.

Octo · 46
Avian thrall has a fight value of 2 if you attack with flamethrower or bar. — trazoM · 1 9/24/19
What trazoM said, but also: you can’t spend all 8 in one go since the ability spends 1-5. (Unless you spent 4-5 ammo on the attack and the rest on an ‘Eat Lead!’) — Death by Chocolate · 13 9/24/19
Haha! Classic! Ok, totally misread that ability, and forgot about the 1-5 max. Bugger. *sigh* it's not a playthrough Arkham if you don't get at least something wrong. — Octo · 46 9/24/19
It’s alright. While I agree with you that Flamethrower would have been better in that situation, that’s also a perfect situation for Flamethrower when the enemy has exactly four health. Against a 5 health monster, the BAR can kill in one shot, and against fewer, it can spend exactly as much damage as needed. I think that the major benefit of the BAR is the ‘pay what you want’ style and no limitations. Flamethrower is still king of raw throughput, but the engage limitations can sometimes be prohibitive (due to AoO, since it more than makes up for action efficiency with its damage) and its inability to combo with Marksmanship. — Death by Chocolate · 13 9/25/19