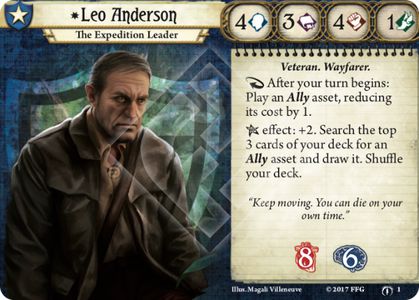 I can see Leo Anderson being a popular investigator with a lot of people. There's a lot to like about him: he's got strong stats in the areas that many players care about the most, he's got a focus on ally cards (which are normally considered quite important), and he's got an easy-to-understand card pool containing some good Guardian weapons.

I'm surprised there haven't been more reviews on him on this site, so I thought I'd put in my two cents.

Leo Anderson's stats are as follows:

I'm a big believer in the idea that, in most cases, having high stats and low stats is better than having all average stats. I think Leo Anderson's stats are very good. This is the stat distribution Roland Banks wishes he had!

Leo's health and sanity totals are fine. Sanity is typically more desirable in most Arkham Horror scenarios, but a lot of damage is accumulated from failed tests, so I think Leo benefits from having a larger health pool.

Overall, Leo's stats help him power through and get stuff done. He can use his , his to ward off horror-inducing treacheries, pick up the occasional clue with his , and his health lets him endure tests failed by his low .

The Guardian card pool offers a lot of excellent options for combat. Because of his ability, Leo is going to want a lot of allies, and Beat Cop and Venturer are standout level 0 ally cards for him from the Guardian faction since they improve his ability to fight and use items. This class also gives him access to a lot of good weapons. I think Leo Anderson is most effective when he focuses on his strong Guardian cards.

Rogue cards might seem like an awkward fit for an investigator with a stat of 1. However, Leo wants ally cards, and ally cards can be expensive - Rogue cards can be a great way for him to boost his income. Lone Wolf is a great option for him since it can greatly increase his resources over the course of a scenario, and Sleight of Hand can let him get more mileage out of items with limited uses for a very cheap price. While he doesn't have access to Hot Streak (4), Hot Streak (2) can normally set him for the game if its played at the right time. Of course, there's also the ever-popular Leo De Luca - I can see a Leo/Leo team-up being an attractive option for a lot of players, especially since Leo Anderson can play allies more cheaply.

For card upgrades, Charisma was practically made for Leo Anderson. While it's possible to play this investigator without having purchased the Essex County Express mythos pack, I think it would make things much more difficult. Leo Anderson wants allies! Charisma gives you the ally slots you need to get them into play more easily.

For his unique cards, Leo Anderson has a fairly strong signature card with a relatively mild Weakness card.

Mitch Brown lets Leo play more allies which is very important. I often consider using Calling in Favors to try and draw him out sooner rather than later. Mitch can only host non-unique allies, though, which is a knock against Leo De Luca. However, I like that it subtly focuses players and rewards them for creating an expedition of generic, faceless men. While Mitch doesn't do much on his own, he enables you to do things like play a Beat Cop to help you fight while you have a Venturer keep your firearms reloaded, and it's those situations where Leo really starts to shine.

Bought in Blood can be a little annoying, but it is not as bad as other signature Weakness cards like Cover Up or Crisis of Identity. If Bought in Blood causes you to discard an Ally from play, it's almost like an automatically-failed Crypt Chill. If it causes you to discard Ally cards from your hand, it's almost like a milder version of Amnesia. If it can't do either of these things, then you're either playing Leo Anderson in a very unusual way or you're already having terrible luck! In that case, it's a dead draw, which is pretty much just a one-action penalty with the potential for it to come back and get you again later. As far as Weakness cards go, it's generally pretty manageable when it shows up.

In my opinion, Leo Anderson has an awesome ability. While you probably won't be able to trigger it every turn, it does offer some incredible efficiency. It saves an action and a resource every time! That's pretty nice. It also lets Leo play an ally asset without triggering an attack of opportunity. This is a big deal - it means Leo can let an ally get soak damage/horror, get discarded, and then get replaced with a new ally without getting hit with any extra attacks. In the right situation, this can be incredible.

Leo Anderson is a very difficult investigator for enemies to kill. Right from the start of a campaign, if he can play Mitch Brown early in a scenario, he can get 3 allies out. Ideally, these allies will be played out over a few turns so he can play them at a discount and without using actions. With most of Leo's allies having 2 damage soak and 2 horror soak, that means he essentially has an additional 6 soak for damage and horror. That's as much as Calvin Wright and Lola Hayes each have for their base damage and horror tolerance! (A caveat - while he might be a good candidate for Charon's Obol, his inability to run away from enemies still makes this a risky purchase for him. When Leo Anderson fights, it's a fight to the death!)

Leo Anderson's ability is ok. It normally lets you pass the check, which is nice, and you occasionally get an ally draw out of it, which is good too. Not the best ability but still solid.

Leo Anderson is a different kind of Guardian. Roland Banks is about killing enemies as a means to get clues; Zoey Samaras and Mark Harrigan are about killing enemies as efficiently as possible. Leo Anderson's specialty is, ironically, being a Survivor. He can take all of hits that Arkham Horror throws at him, absorb them, and then fight back. His playstyle is a little different, but very fun - you often do feel like you're managing an expedition when you use him! It's all about managing your items and choosing when to deploy allies at a critical moment. He fulfills his Guardian duties different from the others in his class, but he still does them effectively, and so I'd definitely recommend giving him a try.

ArkhamInvestigator · 277
To me leo is the only guy that can run Bro Xavier, and again, soak all that damage for the team — aurchen · 1 10/6/18
Mark Harrigan runs Brother Xavier like a total boss. — Razoupaf · 1 10/8/18
I also like to play the Bro Xavier with Mark H. — Alogon · 887 10/14/18
This review probably deserves a little bit of reconsideration: it seems that ffg is moving away from "willpower is defense from the encounter deck", and we see more and more encounter cards asking for agility checks. — Azriel · 1 12/5/18
4

A great character in my option. His `Survival stats’ are excellent (four combat and four willpower). His intellect skill of three can be increased to four using (Treasure Hunter and to lesser extent Dario El-Amin) or by spending resources (keen eye). However, his evade skill is only 1. Meaning, Leo is here to fight and with good potential to investigate.

His special abilities revolve around allies and his basic weakness is losing an ally. Meaning, is you play and non-allies deck with Leo, you don’t have basic weakness beyond the random basic weakness. This is a huge advantage over other investigators. However, playing an ally deck will benefit Leo enormously albeit his own basic weakness. In ally deck, Leo can shine and use all the guardian and neutral allies along with rouge allies (level 0-2) as Leo can take rouge cards level 0-2 (think of non-ally cards such as daring maneuver, decorated skull, eavesdrop, liquid courage, lone wolf [Solo], lucky dice [a must], narrow escape, quick thinking).

Play style: First choose whether you go with allies deck or non-allies deck (you can try something in between. In that case, I'll recommend Leo de Luca, Treasure Hunter, Brother Xavier, Beat Cop, The Red Gloved-Man).

After that, it’s a matter of building Leo deck upon the roll of expedition leader (healing card, weapons, skills, buff cards, depends on your style of play).

As you probably heard, the main fuss about the forgotten age cards such as Doomed, Accursed Fate, and in case you reveal The Bell Tolls - you are dead!

This leaves you with the following: (taken from: boardgamegeek.com.) “1. scenario: you draw Doomed card, grab 1 horror, jot down "Doom approaches"

The way to deal with that is by drawing the minimum cards possible and advancing fast in the campaign (a paradox!). I believe that future expansions might present a card that will enable to counter-curse cards.

In sum, with Leo in play, lead the way!