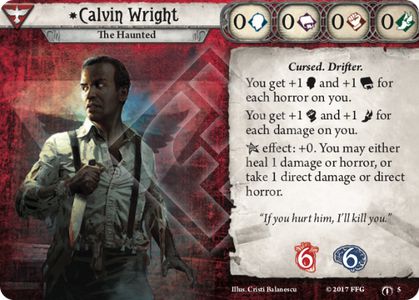 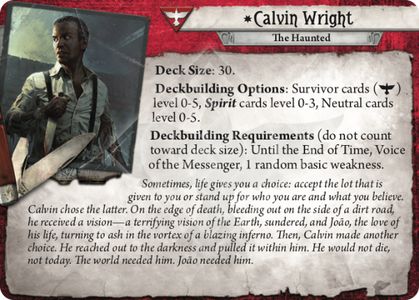 __Deck Building
Search for cards usable by this investigator
Reviews
36

So, it felt wrong that the only review regarding Calvin was a negative one. As I'm writing this Dark Side of the Moon is the most recent pack and boy has Calvin gained a lot since his release back in the Forgotten Age.

Let me start off by saying: no, he is not the most powerful investigator in the game, probably not the strongest survivor either. But he is by no means weak or underpowered. His playstyle and strategy are very different, but he's a totally serviceable investigator.

In general, you should try to push the risk/reward with him: while you can use "Look what I found!" and Flashlight to get clues and Fire Axe to kill enemies without stats, Calvin is really at his best once he's got a 4-4-4-4 statline. With Cherished Keepsake and Leather Coat you can avoid getting killed, with Peter Sylvestre and the new Jessica Hyde acting as more powerful versions that take up an ally slot. If you want an ally that helps with your economy, Madame Labranche is perfectly fine with her 2/2 soak.

I think a lot of the tools I associate with Calvin appeared in The Circle Undone or later, leading to a lukewarm reception upon his first arrival. Cards like Meat Cleaver and "I've had worse…" are great, not to mention Five of Pentacles or Trial by Fire, two cards I think really push Calvin to the next level.

I find Calvin performs best in a flexible role that focuses more on enemy management but can get clues in a pinch. Survivor doesn't have a ton of clue acceleration and he's got access to some great weapons. Cough, Meat Cleaver, cough.

For his Spirit cards, please don't underestimate the value of these. Ward of Protection and Ward of Protection, Stand Together, "I've had worse…", Heroic Rescue, with Dream-Eaters also giving us Self-Sacrifice and Solemn Vow.

So, yeah. If you aren't sold on Calvin Wright, give him a shot. He might surprise you.

So time may tell but for now Calvin just seems horrifically underpowered. The idea is cool - you can happily fail early scenarios to gain trauma which increases his skills which means you can spend those scenarios trying to grind XP instead of making progress - but the payoff really isn’t there to make up for him having such awful base stats.

Let’s compare him to Mark Harrigan, another investigator who uses something bad happening to him (taking damage) to boost his skills. Using Sophie he can boost any skill by 2 for a relatively low cost of taking one damage. Sure, this doesn’t apply throughout the whole game like Calvin’s ability, but Mark easily makes up for this by a) having good stats to begin with, b) being able to boost a stat more than once for a critical test and c) being able to heal the damage to get further uses of his ability. Calvin has awful stats unless he is close to death, cannot naturally boost his base skills above 5, and gets weaker if you heal damage or trauma from him. Mark even benefits from taking damage whilst Calvin gets nothing other than approaching having a decent stat value.

Calvin’s weaknesses are pretty glaring. He is awful at the beginning of a campaign (or any time he has less than 3 damage/horror on him) as he can’t do anything effectively. With 0 in everything he has almost no hope at fighting or evading enemies and he can really only discover clues by using Flashlight to make locations 0 shroud or via events. He can use enemies that deal damage to boost his physical skills, but when stuck with an enemy that only deals horror he is going to be in trouble. Even 2 is a bad number to have in a skill and 3 is still poor, so he really needs at least one other investigator to kill enemies that he cannot handle early and another one to discover clues. However, this goes against his desire to fail scenarios in order to gain additional trauma as the other investigators are not likely to want this to happen, leaving him in an awkward position early in the campaign. Once he gets some trauma he starts to become okay, but then a lot of his deck needs to be devoted to keeping him alive and becoming merely ‘okay’ is not worth the annoyance of being useless for a long time.

So all in all he is definitely interesting, but I can’t really see him being anything other than awful unless some amazing combo comes out that only he can use.

ksym77 · 53
I think I agree with this. Another thing is that Calvin must get his stats to 4s and 5s just to be competitive with other investigators. Because he isn't getting free cards/clues/resources from his special ability, whereas everyone else (except Lola) is. But getting to high stats is a slow and difficult process, and once he's there, he has to deal with being extremely fragile. He does run Key of Ys quite well--I will grant him that--but Yorick and Pete run it even better, so I don't think that saves him. — CaiusDrewart · 1646 5/14/18
Key of Ys is good for everyone. it's just better for characters who can tutor and/or protect it. In addition to what has been said, Calvin has the same problem as a rogue with charons obol (see reviews for it). He makes you play defensively when you're close to death, instead of taking risks to win the game. Another point, his weakness alone can permanently kill him, if he has too many trauma. — Django · 2361 5/15/18
I'd like to point out that Calvin can only gain from fighting werewolves. Think about it (very minor spoilers). — CecilAlucardX · 2 5/17/18
@CecilAlucardX: True. But that combo is so broken and cheesy--so clearly an oversight on the part of the designers--that I don't think I would play with it, personally. — CaiusDrewart · 1646 5/17/18
You want Monstrous Transformation for him! — jd9000 · 16 5/17/18
*knowing wink* Mayyyybbbee. — CecilAlucardX · 2 5/17/18
I wish he had 7 health and 7 sanity. Maybe that would make things more balanced? Although he can just be this game's "ultra hard mode". — bigstupidgrin · 6 5/22/18
Comparied with Mark and Baker,the test"you" may be mean the card you control,that would make it more balanced? — wjqcx512 · 7 5/24/18
@wjqcx512: no; the "you" here is just shorthand for "your investigator card," which is the same with Agnes. Mark specifically says "cards you control," which includes your investigator card. Calvin would be insanely good if he got stats for damage/horror on all his cards. From what I've read, people who've played him think he's insanely powerful, just difficult to use. — SGPrometheus · 188 5/30/18