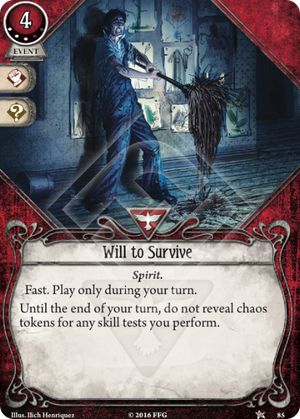 The text on this card is super weird, but according to the Rules Reference, when you attempt a skill test, you have to draw a random chaos token and reveal it, which activates it's modifiers. So, basically, this card makes it so you don't auto fail or get a bad modifier that could cause you to fail a test.

Really good card that fits the Survivor's "last ditch effort" theme. It lets you have a pretty powerful turn and keep all your actions, so if your stats are high enough, you could automatically kill a monster or fully investigate an area. However, the "last ditch" part comes with the cost to play and the cost to even have.

At 3 experience points, it's very costly and is put up a lot of other handy cards. Then, once it's in your deck, you'll have to pay 4 resources. Even though most Survivor cards are cheap, that's still setting you back at least a turn (Emergency Cache and other such cards notwithstanding), so Will to Survive really has to pack a punch when it's played.

All in all, I love this card. It's fantastic when its used with your back up against a wall, and at worst, it's a safety net to ensure your tests will go smoothly.

LikeaSsur · 35
I remember being at the very end of 3rd scenario from the core, where my Wendy-buddy just... won the game with this. Very strong and with huge potential to swing the outcome in favor of investigators. — Onetribe · 227 1/2/17
6

Been a while since the core was released so lets make another review for this "Queen of crunch-time" card.

The essential effect is: For the rest of this round your skill attempts go up against the difficulty tests with no token-middle-man, this means that there won't be any , no massive penalties, heck so long as you just ever so barely skirt the required minimum you will pass the test.

This means that, if you can just match the skill checks for a round, this card will turn all your unlikely attempts into guaranteed successes, with absolute flexibility! Finish off a victory location, kill an enemy threatening a wounded ally, kill a boss, remove or complete a location/scenario based issue, do any of the above in any combination. The only downside is that these actions need to be all clustered in one spot.

There are some disadvantages to this card, the massive cost will keep this in a hard-to-reach spot for Dark Horse decks and every other deck will still have to fight for the resources to play this in a timely fashion. The heavy investment requires that you adjust your deck, it'll be hard to afford Aquinnah, Peter Sylvestre and Yaotl are expensive enough already, you might not be able to fund Scrapper.

Don't forget that every card needs synergy to pull it's weight, even cards as powerful as this one. Baseball Bat for example is one great synergy card since it grants an attack bonus and there is no chance of whilst Will to Survive is in effect, this is also the time to play Double or Nothing or Resourceful, you could also try to land a card like Waylay or Backstab. Speaking of Resourceful you can re-acquire Will to Survive with the recursion from Resourceful (Automatically mind you!) and play Will to Survive over and over (So long as you can keep mustering the cash).

Since this card's release several alternative options have been released, all the desperate cards that greatly enhance your ability to beat a test and Fight or Flight that similarly explosively boosts your success chance for an entire round, this causes "Compound efficiency". In layman terms: by including all of these complementary cards in a deck you increase the odds of drawing at least one of them and gaining the desirable effect, alternatively you can include the weaker cards in a starter deck and then naturally upgrade them into the superior card.

Since it's release, this card has gained:

I really, really, really love this card. I was amazed by it from the first moment I saw it. But it's really sad that very few investigators can actually use it. The problem is its high cost and the fact that the only reliable Survivor weapon is Fire Axe. Most Survivors who can mainly use only Survivor cards will almost always use Fire Axe as their main weapon and that leaves no allowance for them to use this card, as a Fire Axe deck usually stays slim in recources. The only Survivors who can play efficiently without Fire Axe, thus be able to use Will to Survive, are Wendy Adams and William Yorick (there's Lola Hayes too, not a Survivor but she has access to it). I wish there was a more expensive version of this card XP-wise that cost less (5 XP for a 2-resource discount, let's say). If such a card existed, it would open up a lot of options for many Survivors and it would be a solid upgrade for any of them, as well as a great way to spend left-over XP. "Ashcan" Pete would go for Key of Ys less often and William Yorick would have more (in number) solid options to spend his XP on other than getting The Red-Gloved Man. But anyway, that is a different matter.

While Will to Survive is a great card by itself, where it really shines is when you combine it with cards that give you extra actions, and, thankfully, both Wendy Adams and William Yorick have access to cards that give them extra actions (via Leo De Luca and Quick Thinking for Wendy and Police Badge for Yorick). Now, there's Lola Hayes too, who also has access to all of these action-generating cards, along with Ace in the Hole, but apart from Leo De Luca it's kinda hard to use them in conjunction with Will to Survive because of her role mechanism. Combined with these cards, Will to Survive can be a beast, allowing you to deliver heavy loads of damage or pick up a significant amount of clues from a location in a single turn, as long as you have set it up. Guidance and Shortcut deserve a mention here, as both of these cards, each in its own way, can help set-up those big turns when played by your teammates. Guidance will directly extend the turn of the investigator intending to go for that big boom, while Shortcut can save you from the trouble of having to move into the location of interest.

Another thing to note is that Lola Hayes will be able to use Will to Survive in conjunction with the upcoming Borrowed Time in order to save up to 3 actions for next turn to have up to 6 actions with Will to Survive!! Theoritically, she can already achieve a 6-action turn with Will to Survive using Ace in the Hole, but that card is generally harder for her to use due to her role mechanism, while Borrowed Time's effect will be generally easier for her to use, as its forced effect will take place regardless of her current role.

Anyway, Will to Survive is an awsome card, somewhat expensive even for a Wendy rolling in cash from Rogue resource-generating cards sometimes and it's always worth the slot if you can support it. Also great card for recursion via Resourceful and Wendy's Amulet.

matt88 · 2358
Not sure I would like that card if it was cheaper in resources - it is OK when powerful effect is related with high cost, especially in red card pool (mentioned Fire Axe, Madame, Dark Horse) that cost seems to be well balanced in my opinion. About extra actions: Double or Nothing + Quick Thinking combo is worth mentioning. Lastly, I like your ideas about Ms Hayes - it is useful to perform a kind of sweet and powerful grand finale with Lupara + Double or Nothing. — KptMarchewa · 1 8/18/18
I didn't mention Double or Nothing because I feel that it's kinda hard to pull off a combo that involves using Double or Nothing while using Will to Survive, due to Will's high resource cost. You would have to spend more resources and/or play more cards from your hand in order to achieve that, which I feel is kinda hard when you already used 4 resources and a card from your hand. — matt88 · 2358 8/18/18
Another note about Lola, she could have 2 Borrowed time in play and store 6 more actions from ace — Django · 3819 8/19/18
@Django How does Lola get around the Exceptional restriction to do that? — Death by Chocolate · 979 8/19/18
Seems I missed exceptional keyword, ignore my comment. — Django · 3819 8/19/18
I think Ashcan Pete is another perfect fit for this card. He has Dog so a fire-axe+Dark horse combo isnt a must on him. — Tsuruki23 · 2119 8/26/18
1

Combined with Leo De Luca, this card is even better. Or you can play Double or Nothing with it, if you can beat the increased difficutly.

Also don't forget, that you can reuse this card with Wendy's Amulet.

Django · 3819
I hadnt played much Survivor at all since the game was released but I was always see to get in on Ashcan, with me living alone with my dog (not as bad as it sounds believe me, the opposite was much much worse). I tried a few builds using ArkhamDB and it just didn't click. I seemed to run out of gas at vital moments. I swapped a few cards around and was getting closer to a decent feel to the deck I was playing. Then I put in Will To Survive, played it a couple of times during a scenario and can honestly say I felt good about it well into the next day at work. It felt like cheating. — FantasyMan · 1 5/28/18