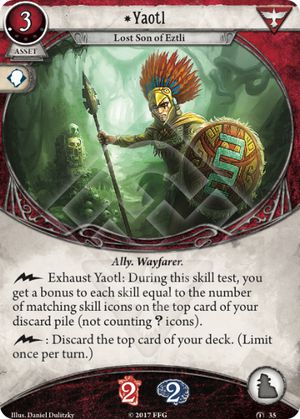 So, the caveat - I've only used Yaotl once, in a Desperate Skills deck with "Ashcan" Pete, and he was the cornerstone of that deck. I found him pretty awesome.

Recurring 4 icons? Yes please! I found that between committing the card, then using Yaotl, and then using Yaotl again at the start of the next turn, I was using the same card 3 times - and it was pretty easy to do so! That is pretty incredible.

The second free triggered action "Discard the top card of your deck" - this is useful if you end up with a non-iconned card, like a weakness, on top of your discard pile. You could pull the next card from your deck and hope it has icons you can use. However, I didn't actually use this - I didn't want to risk discarding those Desperate skills.

So, it can work nicely in the right deck ... but generally, I suspect Yaotl is a bit "meh". You want a deck with lots of icons, and that probably means a skills-heavy built - and there aren't so many of those. Also, most cards don't have more than 2 icons. It's quite a limited user-space.

Otherwise, it's hard to see how Yoatl can displace other allies for other investigators.

I guess this could also work nicely with True Survivor, to haul skills back out of your discard to reuse again.

In short - a really useful tool in the right deck, but possibly rather specialised for general use.

(Though I might have that wrong and people have lots of unusual builds that work with him...)

AndyB · 388
Actually Calvin in a similar build (as with your Pete setup) with Desperate Skills works quite nicely. I use that exact setup with Calvin to pretty good success. — TheBiff · 1 6/4/18
Did you feel you missed out things like Rise to the Occasion? — AndyB · 388 6/4/18
Honestly no. While ? are always nice once you start taking damage and your stats get the boost from it ? arent any more valuable than any other investigator. That being said Yaotl isnt the be all end all and Rise is still a good card I just wanted to try something different and it works nicely. — TheBiff · 1 6/5/18
He could be nice in a lola or agnes deck. Combine with any scrying version, to know what you're discarding. Lola could discard her weakness. — Django · 2116 6/6/18
Desperate skills really aren't necessary to make this work! Even getting an extra +1 or +2 on one important test per turn is absolutely fine. Note that the ambiguity surrounding the wording is apparently not present on the French version of the card; so for example if you used Yaotl with a Fire Axe on top of your discard, you would get +1 combat for that check. — The_Wall · 114 6/14/18
I'm curious if this would work well with a Preston deck and Rise To The Occasion — antichris · 1 1/17/20