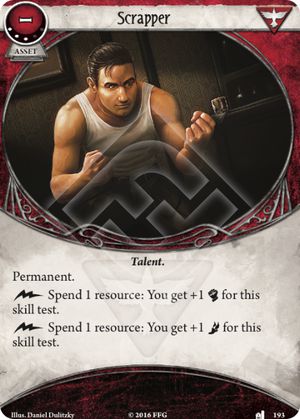 A fantastic card that delivers on it's promises. Persistently available boosting for a fair price.

I probably don't have to stress the importance of hitting skill "sweet spots" and "guarantees". Attempting skill tests with liberal bonuses to ensure success (the typical sweet spots are: +2 for standard, +3 for hard, the guarantee is obviously enough to beat everything the bag has to offer (barring )). Boosting has been the perennial method to generate successes and Scrapper gives permanent access to it!

Compared to its very popular brethren (Higher Education and Streetwise) Scrapper has a bit of a disadvantage in cost efficiency, watch out for this in the early parts of a scenario, if too liberally used it will kneecap your ability to play assets and events to carry you through the mid- and lategame. This is especially true for William Yorick whose deck tends to be very expensive to deploy. Seek to obtain XP weapons that grant high hit bonuses (Timeworn Brand or .45 Automatic for example!) before you spend XP on Scrapper for that guy.

There's also the consideration of which campaign you take this card in, the boost is a big hit/miss. Agility is the least tested ability if you don't routinely evade, defensively there are nearly no treacheries in Dunwich and Carcosa, so that's a bit of a waste, its a bit more useful in Night of the Zealot and Forgotten age.

If you wish to know what characters can best put this card to use, then here's a ranking:

1: "Ashcan" Pete and Silas Marsh. Both dudes have resources to spare, tend to put both stats to full use, and both lack access to better alternatives (without using Ashcans precious slots).

2: Calvin Wright needs some way to deliver consistent success and Scrapper helps with that, it's a medium priority upgrade at best however.

3: Wendy Adams and William Yorick. Wendy Adams rarely needs help with her evasion and has higher priority upgrades, if she decides to go for combat via the Ornate Bow and/or Old Hunting Rifle then she'll need Scrapper to routinely net hits, Will to Survive should be a higher priority though. William Yorick has access to Physical Training and it combos with his ability, it's just flat-out better for him unless you're desperate for agility boosting in Forgotten age.

Tsuruki23 · 861
I think the biggest strike against this card is that the attributes are the two most overlapping stats in the game. Rarely do you need to be good at evading and killing. This isn’t universally true (eg ants or overgrowth) but there’s enough overlap for it to be a noticeable problem. — Difrakt · 641 1/9/19