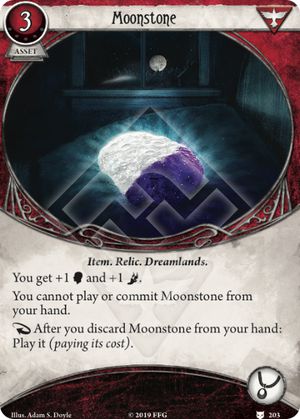 The passive bonuses on Moon Stone are good. But how to play it?

There are two main ways:

jmmeye3 · 219
It's a relic so you can grab it with Elli. The best non-investigator way to discard it at will is probably Cornered, which fortunately is in-faction. — Yenreb · 1 1/15/20
True! I should have said “best level 0 non-investigator” for scroll of Prophecies. — jmmeye3 · 219 1/16/20
Cornered is also pretty good. However i don't think the card is good outside specific combos (bow) and mystics cause the stats don't help win the game, just make the player harder to kill and just slows you down. — Django · 2228 1/16/20
I believe you could also play this off of the discard from Blood Rite. Take extra card draw so that you a) are more likely to draw Occult Lexicon or b) can discard it to hand size as a backup. Might be worth considering in TFA at least — Zinjanthropus · 2 2/9/20
And I think Backpack is, too, a ways to 'cheat' this into play. — Lateralis · 1 2/18/20
0

In addition to the ways described above to circumvent Moonstone play restriction, Unearth the Ancients should work. It indeed allows Moonstone to be "put into play", which is different from "play(ed". It may mostly be relevant in a Ursula Downs deck (maybe Minh Thi Phan as well), but still deserved to be mentioned.

Binoux · 13
Unfortunately, Unearth the Ancients only works on Seeker assets — which is a shame since Moonstone would be quite good in a level zero Ursula if there were an easy way to get it into play. — Spritz · 45 2/24/20
As Spritz mentioned, Unearth and Ancients only works on Seeker assets; however, Archaic Glyphs: Markings of Isis, if you have it, will work. I think it's debatable whether Moonstone is better in Ursula decks than the Tooth of Eztli though, which gives similar boosts (albeit only for treacheries), doesn't have a play restriction, and provides card draw. — iceysnowman · 121 2/24/20
Moon Stone is more useful but harder to play. I use both Moon Stone and Tooth of Eztli and use Dr. Elli Horowitz to search for Moon Stone, if not found I get Tooth of Eztli instead. — AquaDrehz · 112 2/28/20