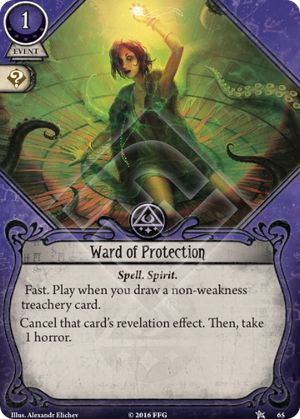 Cancelling a treachery's revelation effect nearly translates to putting it straight up to the discard pile.

Some key words aren't part of the revelation effect, currently including Hidden (though it has little effect on its own), Peril (you can't cancel another player's treachery with this keyword, though this is more a Ward of Protection (2) problem) and Surge - yep, you're still drawing another treachery, even if you cancel this one! Obviously except the very rare occasion where Surge is part of the revelation effect such as False Lead or Snakescourge.

Anyway, apart from that small rule clarification, Ward of Protection is in my opinion one of the best cards in the game and I automatically take it with any investigator who can. 1 resource, 1 horror and 1 card is nothing compared to cancelling a treachery that your investigator can't deal with, that would lead to a defeat, or that would simply cost too much. A striking example, in a 4 players game, Ancient Evils would rob your team of 12 actions... Well, not with Ward of Protection!

The level 0 version is obviously a lot less strong than the level 2 version, the later being able to target any investigator anywhere, but it does the job. Ward of Protection is never going to sit more than a few turns in your hand, and if it's sitting in your hands it means that you are not facing any really problematic treachery, so that's actually fine.

On top of being super strong, it comes with a icon. You'd really rather play than commit Ward of Protection, but if you need to there's that.

It is also a totally fine card even when it eats an investigator's wild slot (such as Dunwich's investigators) if you can't be bothered theory crafting / net decking for ages trying to find the very best card for these wild slots. You'll always get value out of it.

In my review on Scrying, I already wrote that cards that can "manipulate" the encounter deck are - generally - very strong. Ward of Protection might just be the best example of that strength. Pay 1 resource to cancel the non-weakness treachery card you just drew. It's the big "NOPE" card: Did you just drew Umôrdhoth's Wrath at a crucial moment? NOPE, you didn't. Drew a Grasping Hands with a low agility character that could possible kill you? NOPE, you didnt. This effect is just awesome, it's so strong the designers decided to build in a drawback, in that you have to take 1 horror after cancelling the treachery's revelation effect. A minor price to pay, in my opinion. With the deck building rules on the coreset investigators, the only investigators who can currently use Ward of Protection are Agnes Baker and Daisy Walker. Both have high sanity, so they can take 1 horror easily, and with Agnes, you can even turn Ward of Protection into a weapon.

With Ward of Protection being a spell, you can use your Arcane Initiate to dig for it. It doesn't cost a valuable action to use it and - as a cherry on top - Ward of Protection has a wildcard icon, so you can commit it to any skill test.

If I really have to point out a minor flaw in Ward of Protection it would be the fact that you can only use it on a treachery you draw yourself. So there is no way to help out a buddy who just drew a nasty treachery... Well actually there is.... If one of the investigators is using Scrying, you can plan the turn order in a way that the investigator who is carrying Ward of Protection gets to draw the nasty treachery so he can cancel it.

With the deck building rules for new investigators in the upcoming Dunwich Legacy expansion permitting the use of 5 lvl 0 cards form any sphere, I predict Ward of Protection becoming one of the most used cards to fill those "off-sphere" spots in your deck.

Heyenzzz · 5279
Something else I like: if you draw a qualifying card during Drawn to the Flames you can get 2 free clues with no side effect aside from the +1 horror! — unitled · 2158 12/6/16
Just to be clear you cannot plan the order in which investigator draw the encounters cards in the Mythos Phase. It's always the lead investigator first and then the next in clockwise order. You can however place the cards you have seen with the scrying effect in whatever order you want back on the encounter deck. — Killbray · 6127 1/26/19
Why can i add only one card in deck builder? I dont see any info in card what states you cant have more than one. — Terppa · 1 4/6/19
Maybe in your arkhamdb collection you only have one core set — vidinufi · 57 12/28/20