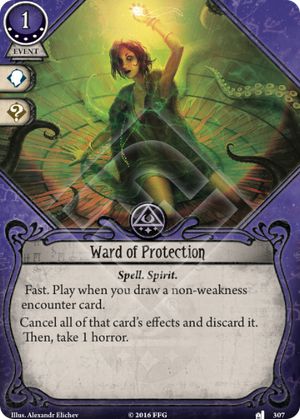 Now that Arcane Research is a thing, I think this card needs to be reconsidered. I believe it is stronger than Ward of Protection II (which is, no doubt, a great card): while cancelling other investigators' treacheries is very useful, I think cancelling monsters is better. The 5 XP cost used to be prohibitive, given the abundance of other very strong Mystic XP options, but now that you have 1 or 2 free XP per scenario to upgrade spells, the actual XP cost will be much more palatable.

Cancelling enemies is extremely powerful. 3+ health enemies are, by and large, the worst encounter cards you can draw. Compared to treacheries, enemies take more resources, more skill tests, and more actions to dispose of. The number one way to lose in this game is to draw too many enemies in short succession and get overwhelmed. Being able to cancel the likes of Conglomeration of Spheres or Boa Constrictor for zero actions is a huge help. These monsters will otherwise suck up most or all of your turn, use up valuable spell charges, and, if the chaos bag doesn't cooperate, could easily survive into the enemy phase to cause you more grief.

This is particularly great for solo Mystics, but even in multiplayer, I think Arcane Research makes this worth picking up.

Note that this card also cancels Surge (unlike the lower-level Ward of Protections). That will be handy on occasion (particularly against Beyond the Veil), but it's really the monster-cancellation that is the big deal here.

While this card benefits from having the ability to cancel any encounter card YOU draw, it loses out on utility to its level 2 younger brother by not being able to protect your fellow investigators. I'd rather have the ability to help out an investigator or even the whole party on a particularly treacherous drawn encounter than being able to discard an enemy. (which most Mystics shouldn't have a problem dealing with anyway with the right spells)

c-hung · 2
Yeah, the targeting freedom on the level 2 version makes it arguably better than this one, which odds a pretty funny position to be in. Adding to the level 2 card's lustre is the fact that many investigators can take it in addition to mystics. — SGPrometheus · 175 6/2/18
Also worth to notice that this card, besides discarding enemies, can break a Surge chain (Beyond the Veil, Attracting Attention from U&U, total Overzealous counter, many more nasty things). Still does it worth 5xp? — KptMarchewa · 1 6/4/18