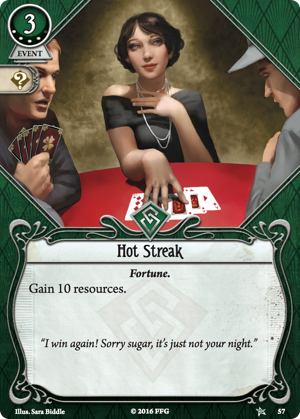 For me, this is the ultimate "big money" card in the game so far (as of The Circle Undone deluxe expansion).

If I am running a resource-intensive deck for a Rogue investigator with access to level 4-5 Rogue cards, I will normally plan to get this card before the end of the campaign if possible. Hot Streak (2) is a good stepping stone to this card, so I will often get that first and then invest 2 experience later on to upgrade it after the fact.

Because you spend 3 resources to get 10 resources, you're essentially getting 7 resources for a card and an action, which is as good as you can get right now in terms of action/card to resource ratio. (the exception to this is if you play Lone Wolf early in the game, but that provides resources over time instead of all at once).

Rogue investigators can use this windfall on Streetwise, which is usually slightly more efficient as a skill pump than most other options. lets them gather clues and lets them avoid enemies. Hot Streak gives a lot of fuel for this skill pump.

As of the time of this writing (The Circle Undone) , no card costs more than 7 resources. So, after you play Hot Streak, you should have the resources to pay for whatever one card you need. If you're "Skids" O'Toole, 10 resources can translate to 5 extra actions over 5 rounds, so that's also something to consider.

Overall, I like this card - it's good at what it does. The experience cost is a little high, but I think that once an investigator has a decent skill pump in play, they're going to want this card so that they're able to use the skill pump as effectively as possible.

A small note - in the art, the backs of the cards being played are the same as the card in Sure Gamble. Maybe everyone's playing the same game?