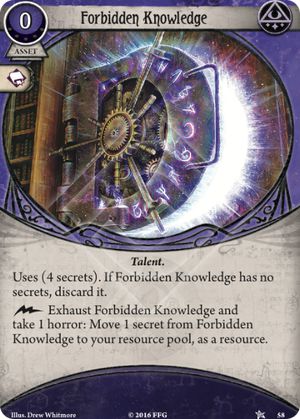 To pass on this gem with Carolyn Fern would just be Foolishness. This is so good on Carolyn with Peter Sylvestre in play. 2 resources every turn for 4 turns -- awesome. With Dr. Milan Christopher, this setup, Liquid Courage, and Teamwork, The Nerd Girl becomes killer support, and the bigger the group, the better. Before you know it, everyone's rolling in it. Have her hand a Dark Horsed Silas Marsh a St. Hubert's Key while you're passing out goodies, and they may as well start calling you Dr. Frankenstein, because you've just created a monster.

TL:DR, avoid like the plague unless your options are limited or your name is Agnes Baker.

The faction is one of the two most resource starved groups in the game (the other being ), powerful economy cards are great but their cost may just be too great for you to pay for. Forbidden Knowledge is one such card, for the vast number of characters the horror is just too great and they perish quickly, Agnes Baker however LOVES this card.

So, it kills you and compares terribly to other cards, so why does Agnes like it? Heck, this card might as well be her strength card, and a 2-off at that! The main reason Agnes loves it is the fact that she can trigger the trigger outside her normal turn. With generous application of spells and being buried in enemies something like this might happen:

Trigger Forbidden Knowledge in the Mythos phase, shoot something with Shrivelling and pull a , get punched in the enemy phase taking another horror. That's 3 triggers on her ability in one turn which is another 3 points of damage on top of her Shrivelling, enough to kill bosses in solo in one round! Of course, typically, you'll perhaps not draw a special token with the Shrivelling or draw horror inflicting effects in the mythos phase, Forbidden Knowledge is very flexible so you can usually adjust accordingly. To be able to pull off combos like these you absolutely need Fearless and might need to forego a copy, or even both copies, of Arcane Research.

Tsuruki23 · 1726
Carolyn also absolutely loves this card. She can run as much Horror healing as she wants, but sometimes needs ways of putting Horror on her to heal. The ultimate combo is of course putting the Horror on the boyfriend and getting 8 resources out of Forbidden Knowledge - all from free and reaction triggers. — Death by Chocolate · 581 7/31/19
you take this for ther horror, resources are just a nice bonus. horror is GOOD (if you are desperate, or a Key wielder outside Carcossa). Dark Horse Jim likes this for instant resources too... — Adny · 1 7/31/19
I'd also give a special mention to Marie for this card. Her card pool is fairly expensive and ally dependent, and she needs to run allies who bring doom into play. FK gives her a means to pay for them as well as kill them on demand. I don't necessarily think it's the best method in her deck to get rid of doomed allies, but it's a method nonetheless. — StyxTBeuford · 11737 8/1/19
Agnes with Forbidden Knowledge and Painkillers can effectively deal 3 "free" damage a turn. Sure, it costs you 3 horror, but who doesn't have a couple upgraded Fearless to handle that?! I love the ability to do damage on demand. You have to watch your timing windows carefully, but in a single turn, you can use one of them in the investigator phase, one in replenish phase, take a hit in the enemy phase, and use one in the mythos phase. That's 4 potential damage to an enemy, on top of whatever else you're doing! In many cases that's enough to wipe the board and let you finish off a scenario! — Ergonomic Cat · 32 9/16/19
This was definitely a star when I tried playing Meat Cleaver Agnes. — Zinjanthropus · 155 5/27/20
2

Forbidden Knowledge is the definition of Risk-Reward that makes Mystic a tricky faction. 0 cost for 4 resources is great, 4 Horror is not so great. Agnes Baker can use this to her advantage by dealing damage when she receives Horror, but you are limited to once per Phase. During your investigation phase you can take a free resource, take a horror, and deal a damage. If you're in a really tight spot where you need to eliminate an enemy, you have a player window during the Mythos phase after encounter cards are drawn and immediately before enemies attack. That's a total of 3 damage dealt, 3 resources gained, but also 3 horror taken in a single round, without having to make a skill check.

This is a useful asset, but you should only use it when absolutely necessary, or you'll find yourself dropping out of scenarios from sanity loss. Unless you're with friends that can patch you up with First Aid, you're going to be saving your second copy for the Intellect icon, or replacing it with leveled up cards as a campaign progresses.

PaxCecilia · 33
Something I messed up too, this card exhausts when you use it, so it is once per round. It still works great with Agnes though. — Kamalisk · 161 11/17/16
Yep, scratch a large portion of the review, but it's still a very strong card out of Agnes. Actually found it to be strong in Daisy if you don't have Dr. Chris out yet for cash. — PaxCecilia · 33 11/18/16
Don't forget you can take the horror on an asset, which improves survivability. This pays for, say, Elder Sign with 2 resources to spare, and it can sink 4 horror. — BD Flory · 207 12/3/16
I think this card is better when played with Jim, as with his trumpet out he can recover without using actions, thus preserving the action less bonus of forbidden knowledge — arkham · 1 12/14/17
0

I can see the appeal of this card in a Carolyn deck running Peter, but even if you do include it, I think it's a card that's due to get replaced pretty quickly. Depends if you're planning to go with Ancient Stones. If you do, you don't need this card once Ancient Stones (Healing Horror version) is up and running by scenario 3. Which begs the question...if it's going to take up a slot, why not find something more interesting to put in there? You'll make money with Peter solo anyway in the meantime. And if you're running Painkillers, this makes this card even less appealing. Carolyn deck building can be tight, but I favour trying out some esoteric cards that could help now and down the road...maybe a True Grit for versatility or Inspiring Presence to heal up and ready Alice Luxley if she's in your deck. In short, this card feels like 'immediate gratification' and even a bit superfluous, and would be neat to try other strategies with Carolyn.

Krysmopompas · 98
I dont follow as to why this card is redundant with Ancient Stone. It doesn’t take up a hand slot and Ancient Stone can heal the horror this dishes out if Pete isn’t around. I’d argue if you’re going Stone that it’s Pete who becomes redundant, in which case Carolyn could afford to run Xavier or Alice instead. — StyxTBeuford · 11737 9/9/19
I just ran Carolyn through Return to DL and TCU, and using Charisma with the Alice/upgraded Pete combo early gives a nice +1 to Will and Intellect, as well as the Agility bonus. That's more of a boost than 4-8 resources for me....with Pete doing double duty on stat boosts and sanity heals, plus Ancient Stone healing everyone, the resources were starting to roll with scenario 3 both times. I didn't miss this card from then on, although depending on your strategy I can see a case to add them in the early going. But I had a couple of Delve too Deeps in there instead; the 15 max seeker/mystic cards were a factor in weighing best fit. — Krysmopompas · 98 9/10/19
I still disagree. This alongside Pete or Ancient Stone is equivalent to Lone Wolf. You spend one card and one action for 8 resources across a scenario, about what you would expect net from Lone Wolf most of the time. Less potential than Lone Wolf, but twice as fast so drawing it late game is still good. The question becomes where you spend the resources, not if you need them. Dynamite Blast is resource hungry, and there's always Keen Eye. — StyxTBeuford · 11737 9/10/19
I also feel that I need to clarify you weren't taking resources every time Carolyn healed, She gives resources to the person being healed, therefore not always to herself. Forbidden Knowledge + Stone/Sylvestre is great for generating your own resources. — StyxTBeuford · 11737 9/10/19
You generaly NEVER take this card because it generates resources. You take it because it deals you horror. — Adny · 1 9/10/19
Painkillers also deals horror, maybe not as fast though. And it heals you at the same time. For the resource problem I just pick up one Emergency Cache that will eventually go on Stick to the Plan. One action = 3 Resources, 2x Let Me Deal with This to let you take the will tests of your colleagues, and the general horror of many scenarios and I'm still in the camp of not missing this card. — Krysmopompas · 98 9/10/19
Painkillers are very nice. But Forbidden Knowledge works without using an action, which is huge. There are action windows in every phase, so this card lets you trigger a damage during any phase that you want. But really free actions are the strongest thing you can have in the game, so the fact that you don't have to use an action to take the horror is huge! — Ergonomic Cat · 32 9/10/19
I dont see why I would ever run E Cache over this. 2 resources basically right now and then for 3 turns afterward versus just 3 now. It’s not even close to the same. — StyxTBeuford · 11737 9/10/19
Also it is worth noting that Painkillers also work without spending an action. There’s not really a good reason to not run both though for people who want horror. — StyxTBeuford · 11737 9/10/19
you have to be hurt to use Painkillers. — Adny · 1 9/11/19
Yes, that's true. Partly why I prefer Forbidden Knowledge over Painkillers. — StyxTBeuford · 11737 9/11/19