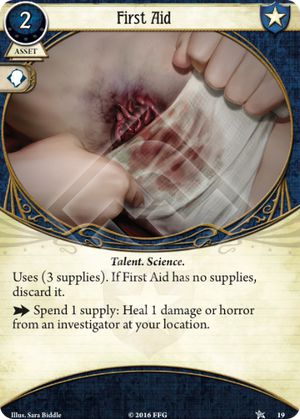 I keep finding First Aid a huge sink of actions for very little. It costs 1 action to play, 3 actions to use, and 2 resources, for 3 damage or horror. Compare that to Uh oh, Bandaid Time, which heals 2 damage for 1 action, 2 resources, and can be used to heal Allies. Seekers can run Armchair Counseling, and Rogues can run Delicious Booze. And those are just for healing others; #Opium and #Heroin can shove that damage onto allies, Fearless for Mystics, Ted and Leather Coat for any Survivor... So much out there that just completely blows away First Aid. Maybe we can get an upgrade that lets you spend resources to turn it into a shocky ability instead. (Fast triggered. Sideways lightning bolt. Sith handshake, I dunno)

With the introduction of Ever Vigilant, it's time to re-evaluate First Aid and make once more the obvious comparison with Emergency Aid.

Disclaimer: Why heals are good? Cause there is such a thing as direct damage/direct horror. People often have to resign when they run the risk of getting killed/insane by a single encounter card.

Its been years since first aid came out, and I was thinking of giving it another look now we have shiny new core set and examine the problems with it and see how things may have changed, a lot of people agree on a few key points.

Cost: Guardians for many years were the poor class, they had very little economy and the stuff they had wasn't completely reliable, but now we have stand together level 0 and even clean them out as source of cheap fast injections of cash, so the 2 price is less relevant today.

Limited Use cases: this seems to still be a big mark against it and one that doesn't seem like it will ever be able to be worked around, you can only heal investigators, only at your location. the fact that it is completely slotless is a huge upside but not enough of one to overcome such a minor use. (that a lot of other healing cards don't share)

Action Sink: the big bug bear of the card is that 3 actions for 3 points of healing is rather slow, even if you get first aid into play fast and free you still only max out at spending a turn to get a sizeable chunk of damage/horror off people, hardly worth the two extra actions from not using a healing event to gain that extra 1 point of healing. (again in the best possible case)

Fair to say first aid has only really improved one of its drawbacks (or to say it's less relevant today), and in that time we have had a huge tidal wave of healing effects that do incredibly well in the two area's it can never overcome. it is however the best possible counter for the edge weaknesses (it can heal both types, over any number of turns and from up to three people), but that only really matters if more than one player has one, otherwise you'll be much better of just taking a healing card that specializes in the type they need healing for.

The sad proclamation is that first aid remains very useful to the game in its true position, being a floor no healing card will ever dip below, and still may see some minor play due to edge weaknesses and down the rabbit hole.

Zerogrim · 262
I can think of a healing card, that dips below the floor, though for thematic (and fun!) reasons. Infirmary from "The Unspeakable Oath"! Though you might still argue, it surpasses "First Aid", because it does not require a play action and 2 resources. (Still likely a move action!) And it also covers all Edge weaknesses. — Susumu · 271 5/14/22
healing words and clarity of mind in Level 0 are both strictly worse than first aid. same costs, same icon, same effect, but each take a slot and are limited to either damage or horror healing. the spells are only better for their spell trait and If you play cards that synergize with arcane slots. and yet, Despoten being better than These two cards, first aid is still miserably bad — PowLee · 13 5/14/22
being spell tagged is worth a lot, so many things combo with spells, I'd say they are more valuable than first aid jut because you can get their upgrades even cheaper, but they are hardly fighting over a taboo list spot are they. — Zerogrim · 262 5/14/22
I stand with what I wrote in my "Clarity of Mind" (3) review: For Carolyn, CoM is likely better than FA. For others, I doubt it. The Arcane slot is a high tax for the benefits you get from the Spell trait. And "Arcane Research" can be spend on better spells for most investigators. — Susumu · 271 5/14/22
Old art is also gross — MrGoldbee · 1314 5/14/22
I actually like the old ard. Would wish, there would be more of it in the game. The theme is horror, not some boring super hero flicks. — Susumu · 271 5/15/22
* "art" and "more of that kind" not "more of itself" — Susumu · 271 5/15/22
2

What I like: There is not enough healing in the core set, so often times when you get low on health or sanity, you better book it or pray. The cost is reasonable, it doesn’t take up a slot, and you can use it on other investigators which could turn you into a little mini-healer which Agnes will love so she can ping a couple more times. The fact that it heals horror and damage is functionally useful. The will skill icon is great for both Roland and Skids right now, as they don’t have a very fun time with will based treacheries. Not needing a skill check to complete (medical texts) or a check to make it better (liquid courage) is also good in some situations.

What I don’t like: The action economy with this is abysmal. I understand, you’re not winning if you’re dying, but to just use it once you’ve spent two actions not making progress. I never feel like I have enough time to play it in solo, and even in multiplayer either the threats have been tackled evenly so there isn’t a dire need for it over something else or the situation is already so bad that spending those actions to recover won’t really help much. The scenarios are just too short in my eyes to warrant using this in most cases.

What it needs: Honestly, first aid needs more investigators like Agnes who care about taking some sort of damage or horror. It also needs other healing cards to stay out of the game. I would gladly take the risk on liquid courage over this, because healing two for a single action is much more reasonable even if it is only horror in that case. As time goes by I feel like healing options will only improve, and unless they are using first aid as a benchmark and everything else gets a risk or negative involved, first aid will fall to obscurity.

Scaling: Here’s where this card shines however. First Aid as it stands has the same level of power in all the difficulties, which gives it a slight edge. With no test needed to make it work and no test needed to get a benefit, it gets more reasonable as you up the difficulty. Easy and standard, I’m waiting for a better option but in hard and expert, this does seem a bit more reliable.

Doma0997 · 3
I agree on all points, especially re: action economy. For example, the proactive damage/horror control of Leather Coat/Holy Rosary is more action efficient than First Aid's reactive effect. For the same or lower cost, those cards can prevent 2 damage/horror for 1 action, where First Aid would require 3 actions to do so. And Elder Sign Amulet/Bulletproof Vest only increase this action advantage. True, those assets take up slots, but, for many investigators, their Body/Accesory slots are under-used. First Aid's advantages seem to be its flexibility in healing either damage or horror and its ability to heal other investigators. And for some investigators, it may be the only healing option. — Herumen · 1652 1/15/17