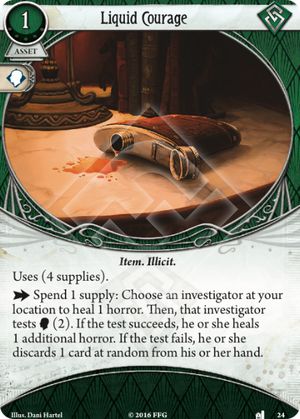 I'm not sure about about Liquid Courage for many of the investigators in the core set/Dunwich legacy. To be honest, the investigators who struggle with Sanity - e.g. Roland Banks, or "Skids" O'Toole - also tend to have low willpower, so this isn't so useful for them.

Zoey Samaras can make pretty good use of it, particularly if she has something to give Willpower a boost, and her sanity is low enough to need a little help.

However, I've found it fantastic for... Agnes Baker. Yes, she can't actually take this card herself - but another investigator can, and then use liquid courage to heal Agnes' horror. This lets her use her ability to inflict damage when she takes horror even more often, which is awesome, and her 5 makes it unlikely that she'll fail the test to heal the second horror very often.

So if you're hunting Great Old Ones with Agnes at your side, embrace sociable investigating! Come 'ere Agnes, and have wee dram for yer nerves...

AndyB · 391
If you don't plan on using this on other investigators and you got experience to spare, i'd rather use the elder sign amulet, as it's more action efficient and gives you 4 more sanity instead of 2 and does not require a test, that might fail. — Django · 2361 5/11/17
Okay, I agree - mostly due to reliablity - but Liquid Courage could heal 8 horror. Elder Sign can only sink 4 horror, and costs XP, and clashes with Zoey and Agnes' signature Accessory items. It is a gamble, though, and is expensive in terms of actions, so yeah, I actually agree for most investigators - but healing 8 horror off Agnes is a gift... — AndyB · 391 5/22/17
I think that for Jim this card is fantastic. Much better then Clarity of Mind: it is cheaper, it has more supplies and it can heal twice as fast - which means less actions needed. The downside is it uses slot for possibly another fantastic card if might want to use. — XehutL · 45 7/17/17
.. he might want to use. — XehutL · 45 7/17/17
How many resources does Carolyn Fern get if Liquid Courage is used and the test is passed? — unremb · 127 5/3/18
@unremb: One, twice; two total. The ability sets up two effects, one of which definitely heals horror, ands another which may heal horror. Each one of these is a separate effect as far as her ability is concerned. — SGPrometheus · 187 5/14/18
@unremb: More accurately, the single effect set up by paying the cost (spending the action and the supply token) has two possible instances of horror heal, both of which Carolyn's ability can react to. — SGPrometheus · 187 5/26/18
as;lidfjapowijinfqpwonfaw; turns out I'm totally wrong, you only get 1 resource from this heal because the second point of healing is "additional" and therefore not a separate effect, as per the FAQ. — SGPrometheus · 187 6/10/18
Can you heal horror from allies? — Dethvir · 1 7/2/18
4

This is an cheap (if clunky) option for horror healing that gains new life as a combo piece for "by-two" Rogues. The ability to trigger an easy test at will provides fodder for "Watch this!" and Lucky Cigarette Case - in combination with Double or Nothing and a willpower talent, a rogue can potentially win six cash in a single test of whiskey-shooting ability.

On a separate note, I absolutely love that the cards for drinking, smoking, and gambling all work together to promote a play style based on risk-taking - what a resonant design!

leonofthehollow · 5
The difficulty with this card (which neither of the reviews discuss) is the additional test. Tests are bad, and on Hard/Expert, even if you pass, horrible stuff might happen with the Major Arcana. The action economy also isn't great - your first heal has cost 2 actions rather than 1 (unless you're running Fence). — duke_loves_biscuits · 604 7/14/18
@duke_loves_biscuits: Major Arcana is my new favourite unofficial Arkham Horror term. — cb42 · 21 8/23/18
0

There's a fun place for this in a Finn Edwards's deck that is using Fence, not to use it himself but in a support role, dishing out invigorating shots to colleagues with high enough willpower. It may only be a consideration late in the campaign when your deck is already well-tuned and you have Adaptable to bring it in or if you are working with someone who you know will always be on the edge when it comes to sanity.