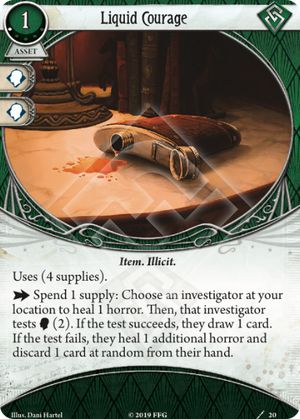 aeongate took a good broad look at this card, so I want to highlight an even more niche use for this card... Drinking your problems away!

This card is the first* player card that can LITERALLY DISCARD WEAKNESSES out of your hand because its discard effect is random. Preston can forget his "Debts". Winifred can't discard Arrogance (since it will be automatically committed), but it sure is an easy test to fail!

It can't discard any of the various Hidden weaknesses, due to the additional rules for Hidden cards, but there are other non-Rogue specific weaknesses that you may want to drink away.

Probably the best weakness you'd want to discard is The Tower • XVI or Dark Memory, but good luck getting Agnes to fail a test! Dreams of the Deep should be easy enough for Silas to handle on his own.

Finally, there is at least one campaign specific weakness this can discard that I won't name here, but they exist.

*OKay, so aeongate is right, the level 0 version did it already, but no you're also healing 2 horror in the action, so it is efficient even when unsuccessful.

Death by Chocolate · 1130
Ooh, if you use this with The Tower and Arrogance in your hand (The Tower presumably prevents you from committing Arrogance) you have a decent chance of discarding at least one of them. — Zinjanthropus · 205 9/8/20
This was actually true of Liquid Courage (0) which has the same random discard on fail. I always assumed that even random discards ignored weaknesses, but it seems you're right that rules-as-written, they do not. Seems like a classic FFG rules oversight if you ask me, but admittedly the concept of drinking to forget your weakness is pretty funny. — Trinity_ · 183 9/8/20
True, though if you fail Liquid Courage (1) you still get to heal 2 horror. Of course you can't guarantee discarding a weakness unless you're down to only weaknesses in your hand, which might mean that you're already screwed in the case of Wini. — Zinjanthropus · 205 9/8/20
Agnes could try "Drawing Thin", to up the test to 6 difficulty. She still likely might pass the test, but has better chances to fail that way. — Susumu · 211 2/23/21
Preston cannot take it, it's illict — Drostt · 6 1/22/22
Agnes can take Drawing Thin. — MrButtermancer · 30 3/26/22
5

I'm generally a fan of upgrades to cards that aren't strictly better because they make for some interesting deckbuilding considerations (and card analysis!). Each dram of Liquid Courage (1) has you heal two horror and discard a card if you fail the Willpower test, and heal one horror and draw a card if you succeed, where the original had you either heal one horror and discard, or heal two. Clearly, healing two horror is better than one, so in the event an investigator fails the test on Liquid Courage, the level one upgrade will be better. As for succeeding, drawing cards is pretty good, so I think that most investigators will be happy to take an extra card even if they are desperate for healing.

The fact that the additional horror healing is tied to failure on Liquid Courage (1) is going to be another upside for most investigators wanting horror healing. Generally, high Willpower goes a decent way towards protecting you from taking horror from encounter cards like Rotting Remains, so paradoxically the very investigators that had a good shot of passing a Willpower 2 test were the ones who least needed the additional healing from a successful Liquid Courage (0) test (the main exception being Agnes Baker). To make matters worse for the Dunwich Legacy version, Rogues as a class tend to have lower Willpower and sanity than most, so they were likely to end up sipping for a single point of sanity and a lost card for their trouble. Pretty unappealing!

Liquid Courage (1) solves that problem neatly by healing double when you fail, meaning that is no longer a lose-state for the card, and it still rewards you for actually passing the skill test should that come up. It now offers reasonably efficient repeatable horror healing, but you really have to be willing to throw away cards to use it effectively. Alternatively, target investigators who are out of cards to ignore that downside and you might also help them fill their hand back up. It's possible you can soften the blow of Liquid Coruage a bit by playing Survivor cards that want to be discarded - Moonstone, Winging It, and Fortuitous Discovery, to name a few - but given that the discard is random, you'll still have to thin your hand out a bit to make it likely you hit a specific card.

One substantial downside remains for Liquid Courage (1), and that's the possible scenario reference card effects for the , , , and tokens, which can sometimes punish you for failure and push you away from taking superfluous skill tests. The meaningfulness of this downside is going to vary from scenario to scenario, but I think in general this shouldn't disuade you too much if you are particularly hurting for horror healing. Maybe you can beg a Mystic teammate to seal the for The Doom of Eztli to put your mind at ease!

Finally, a niche use for Liquid Courage (this also applies to the level zero version) is in generating a low difficulty skill test to commit multiple "succeed by" Rogue skills to. This is most likely applicable for Sefina Rousseau with her 4 Willpower, and you can throw in "Watch this!", Momentum, and/or All In to generate resources and cards. Additionally, Double or Nothing will only push the skill test to difficulty 4 where it will likely still be possible to oversucceed.

This doesn't quite have the versatility and simple reliability of something like First Aid, but it can put out much more horror healing for you and your team if you can stomach discarding a couple of cards. I suspect many of the low Willpower Rogues could stand to benefit from trying the new and improved whisky to salve their sanity. I doubt most Finn Edwards players will give up on playing Peter Sylvestre for a similar role, but Liquid Courage (1) might free up an out-of-faction slot if you are willing to run without the big man, and it is Illicit-traited if you're playing into that. "Skids" O'Toole and Tony Morgan could also both do a lot worse than turning to the bottle with Liquid Courage (1). It'd be a disservice to review such a good horror healing card without mentioning Carolyn Fern, and I think this is likely to be her best low-level option for repeatedly healing hear teammates' horror.

Trinity_ · 183
This is definitely an interesting one. As far as direct horror healing cards that Wini can take (so excluding the pretty solid ally in her pack who only heals from herself), there's this and Moment of Respite. Moment of Respite is probably a little less awkward to use, but it is also 3xp. I'm about to try this in Dim Carcosa (true solo), because I couldn't resist shelling out for Ace in the Hole. We shall see how it goes. — Zinjanthropus · 205 9/8/20
Note that Joey "the Rat" Vigil (3) and Fence (1) can get this down fast. Joey can also discard it once it's out of supplies (though you could also Contraband it). Smuggled Goods could tutor it or recur it from the discard. It could also be Scavenged or Backpacked. I'm not sure if those synergies make it good, necessarily, but there are a lot of them. — Zinjanthropus · 205 9/8/20