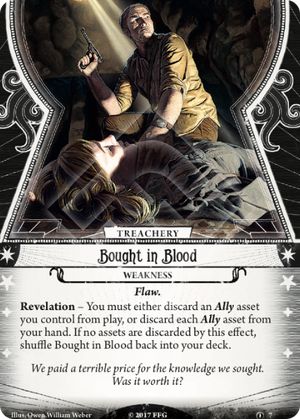 As far as signature weaknesses go, I think this is one of the milder ones.

Leo Anderson's unique abilities means that he should have a few allies in his deck, and that he'll normally be wanting to play one ally per turn at most. So most of the time that you have this card, you should have a choice between discarding allies in play or allies in your hand, so that should give some wiggle room to advoice the worse of the two choices.

If you don't have any allies, it's just a dead draw. That could be a lot worse! However, if you have no allies in play or in hand, then maybe things are not going well already.

ArkhamInvestigator · 278
The fact this weakness punishes you more the better your position is does make it very nice, if I am already getting beaten down having "lose 1 draw" as a weakness is pretty nice. — Zerogrim · 262 4/4/21
1

Another "pick your poison" signature Weakness. Looking at the two elements, the effect and the discard condition, we get:

The effect: Leo loves allies, and he loves using them up. The worst case is if you get caught with a pricey or critical ally out (say Leo De Luca or Agency Backup) out and nothing in your hand, but Leo loves to cart around a lot of allies, so this is less likely for him than other investigators. He ought to have one of his meat shields ready to sacrifice. Charisma and a few lower-cost allies is a buffer. Guard Dog, Hired Muscle, or Treasure Hunter are cheap to play, have useful abilities, and synergize with Mitch Brown should you find him, and a "big money Leo" can easily pay the "drip insurance" cost for the "pay as you go" allies. Probably the saddest thing is that this card won't feed Leo's beloved Decorated Skull.

The discard condition: You draw it and either pay its cost or shuffle it back in. Pretty simple.

All in all, this is a way below average signature weakness, unlikely to cause even a significant tempo hit, much less tank a scenario.