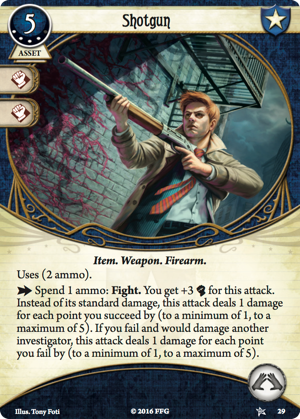 This 2-handed firearm is the big granddaddy of damage.... BUT ONLY IF THE GODS OF THE CHAOS BAG ARE WILLING TO SMILE UPON THE INVESTIGATOR CARRYING IT. Luckily you can build your deck to increase your chanches. With only a Beat Cop ally in play and an Overpower or Unexpected Courage to commit to a fight test, a Roland Banks investigator can rack up his attack value to +10, greatly increasing the chanche to pass the skilltest and do some big damage (up to +5!!!).

The shotgun has some drawbacks to balance its potential huge power. With a cost of 5 resources it's quite expensive and it's 2-handed, so it's the only hand asset you can have at a time. It only has 2 shots, so if you really want to go to town with the shotgun you might want to invest some extra XP in Extra Ammunition. Having 2 copies in your deck to reliably draw the shotgun requires you to invest a whopping 8XP (9 or 10 XP if you want to fuel the shogutgun with 1 or 2 copies of Extra Ammunition )

And last but not least... it has the potential to backfire BIG TIME on the poor fellow investigator who you just tried to rescue,..... but tragically ended up dead because those nasty gods of the chaos bag handed you the auto-fail token.

(please let me know when this happens to any of you guys and gals.) :-D

Heyenzzz · 3005
This damn card along with one dynamite a martyrdom level 2 beat cop, and Lita Chantler ( with the other investigator Agnes) was the only way possible for me to defeat the Elder god along with a significant amount of luck from the chaos bag gods. — bullettrang · 10 12/20/16
5

Poor Shotgun. Never did it shine.

Dunwich was released, bringing with it Lightning Gun, a king who reigned for two years. While the shotgun might do 10 damage in 2 shots, this was still an unsure bet, netting all 5 damage was a struggle compared to the nonchalant unaided ease a Lightning Gun did 3. Securing hits was just that much better.

M1918 BAR made its appearance in the latter half of Forgotten age, challenging the king and pissing all over Shotgun as a weapon that could with tremendous reliability do the damage shotgun was supposed to be the best at: lots of damage in just 1 or 2 shots.

And now finally, Flamethrower has taken the seat of the king, outpacing all three guns with hilarious efficiency at the measly cost of not being able to wear a Bandolier.

So, where does my dour opinion of Shotgun come from?

Here: The hypothetical target is a 4-fight 4-hp foe, you're a Roland Banks, the classic , and you're toting an Overpower. With the card committed and a shot from the gun, you shoot with +9 to hit, against the 4 fight foe you're at an advantage of +5. Now, you might draw something like a -2, skulls and cultists often have this penalty and the standard deck often has 2 of these, so a very common number, the net result is that you beat the target by 3, meaning that the thing you just shot with half your ammo from a 4xp card and a skill is still alive, the token was far from terrible and still the monster is alive and kicking. Add a Beat Cop to that equation and you're back at square 1 if you drew a -3 or a special token that at the moment has a larger penalty (as is usually the case with harder, latter half of campaign, scenarios).

I'm no fan of power creep or OP weapons like the Flamethrower, but the Shotgun just doesn't perform as advertised, it never has.

Now that Marksmanship is out, my group did a theoretical calculation of max damage possible in 1 attack, particually to kill Spoiler in one attack. The following assumes a party of 4 players and using Extra Ammunition, Venturer and Contraband to pump ammo into Shotgun equal to or higher than the amount of chaos tokens.

Thanks Caius and Jd90 for your tips

Django · 2799
This isn't quite possible because at the moment no character can take both Seal of the Elder Sign and Vicious Blow II. However, you can still guarantee an Elder Sign by getting your Shotgun to 20+ ammo (easily achievable for Zoey with Extra Ammo, Venturer, and Contraband), and then using Eat Lead to pull the entire chaos bag. — CaiusDrewart · 1847 6/21/18
Note that other players can only commit 1 card to your tests too. — jd9000 · 43 6/21/18
Getting error message on iPhone, will update calculation later — Django · 2799 6/21/18
About Marksmanship: "fast cards can only be played on your turn" that part of "fast" definition affects cards without additional mentioning when you can play this (like Magnifying Glass, Switchblade etc.). I don't see a reason why playing 2x Marksmanship is not possible. — KptMarchewa · 1 6/22/18
Actually the rule is fast **assets** can only be played on your turn. Non-asset fast cards can be played at any time, provided you meet their conditions. — Daerthalus · 5 7/4/18
If you are playing Labyrinths of Lunacy, you can go much higher. I won't say anything else... :) — duke_loves_biscuits · 703 7/5/18
I've played labyrinth as mini campaign, but don't see what you mean. It has some auto damage effects for specific bosses, but they don't stack with the above calculation. — Django · 2799 7/27/18
Update: Added Hatchet man. The damage is added to next attack, so double or nothing works. — Django · 2799 7/27/18
you cannot count the base damage of 1 plus the five damage of the shotgun, by the way if the other investigators are Leo, Skids and Lola they can all commit both vicious blow and hatchet man giving you an other damage at that point. — Cadio · 1 9/17/18
I believe you can also Double or Nothing Hatchet Man... — Evilamarant7x · 31 9/17/18
Marksmanship has you activate an attack action and gives the bonus for that attack. Using two would activate two attack actions — shenaniganz11 · 7 10/26/20
sorry, i read that wrong. You're right — shenaniganz11 · 7 10/26/20