Miti
Capitolo. Stage 1
Indizi: 3.
You pinch yourself to see if you are dreaming, and sure enough, your skin stings and reddens. You take a few deep breaths and try to think rationally. Whatever is going on, you must explore the theatre to learn the truth of the matter.
JB Casacop
La Strada per Carcosa #46. Cala il Sipario #4. 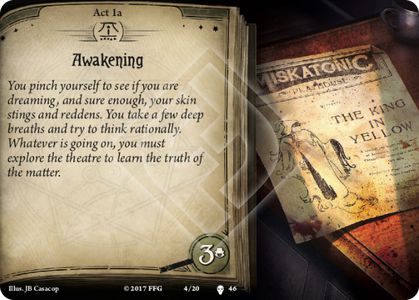 Capitolo
A shadow creeps along the wall beside you, and your heart leaps into your throat. You turn, and a figure flits away just out of sight. Either your mind is playing tricks on you, or someone else is in the theatre.
You follow the direction of the shadow, rounding a nearby corner. At the far end of the hall, he stands awaiting you: a man in an elegant black suit, his face covered by a pale mask. Though his attire has changed, you instantly recognize him as the actor who played the role of the Stranger - one of the characters from The King in Yellow. He turns and disappears through an open doorway, as if taunting you to follow. 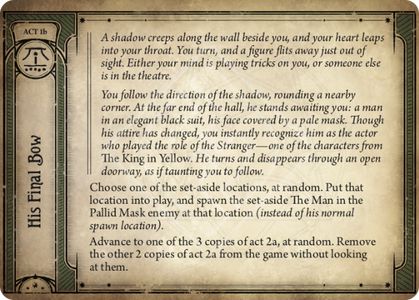