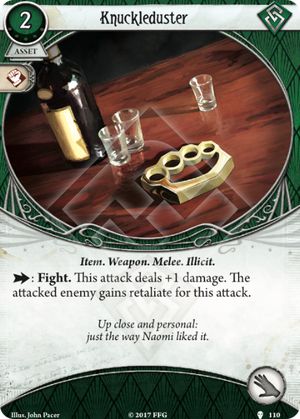 A strong contender for most unplayable card in the game right now, at least if we're talking Hard/Expert. The upcoming Finn Edwards (who will have 4 Combat) may be able to use this card, especially since he will be very good at exhausting enemies first (which turns off Retaliate). But for Skids or Jenny, this is 100% unusable on anything but Easy, and even there it's unnecessarily dangerous and I would not recommend it. Obviously, Sefina can't even consider it.

(Update: Finn actually has 3 Combat. So I think this is pretty bad even for him.)

Although consistent +1 damage is one of the most desired traits in a weapon, the fact is that most enemies in this game don't have Retaliate. Given that Knuckleduster lacks a to-hit bonus, and that Rogues have low strength, using this card means subjecting yourself to a ton of unnecessary damage. You can evade and exhaust the enemy first to avoid this, but I really don't recommend this. Evading enemies and then fighting them is incredibly wasteful for any investigator not named Finn. Either just kill them or evade them, but don't waste actions doing both. Rogues have plenty of other weapons to pick over this.

This card continues a very weird trend in the design of Rogues where the class gets cards that don't remotely fit the investigators. Rogue weapons like Knuckleduster, Switchblade, and .41 Derringer all seem designed to work for investigators with really high strength. Except, you know, none of the Rogues actually have that, so Rogues are terrible with their own weapons. (In contrast, Survivor weapons like the Fire Axe and Baseball Bat are much more sensibly designed to work for low-strength investigators, so Survivors are actually good with them.)

It's not as bad as it looks, really.

class characters usually rely on maximized hit chances with lots of cash-money and cards committed to ensure success and high-profile results. You don't take a .41 Derringer or any of the other (Non Chicago Typewriter) weapons into a fight check without doing everything to ensure a successful check. If you want to do careless fight checks just 2 above the target then play a instead! attacks are all about doubling up and dealing big and powerful hits where only the fails your attack. On these attacks it really, really doesn't matter if the enemy gets buffed with Retaliate or not, it really doesn't.

Also, Retaliate gets shut off if the enemy is exhausted, in these circumstances Knuckleduster suddenly becomes a cheap shot weapon, Finn Edwards evades all the foes anyway, even if he doesn't immediately need to, quite often you'll find yourself Evading a foe, punching him once, then clearing out, then once that foe gets in your way again down the line he'll have some damage on him and be easier to kill.

Suffice to say that I've really changed my mind about this card after actually trying it. Don't be delusional though, Switchblade is still a far-superior "infinite" weapon.

Tsuruki23 · 1823
If you're only going to be doing the occasional super-powered-up attack, why would you use this? The main selling point of Knuckleduster is that it has no ammo limitation and that is irrelevant with this kind of strategy. Just use a gun then, which will offer a useful to-hit bonus. — CaiusDrewart · 2230 8/2/18
I agree that this could be fine for Finn on really low levels because of his free evade. (For everyone else, the need to evade first and then use this is prohibitively expensive.) However, I think that using a weapon without a to-hit bonus as a 3 Combat character is just a nonstarter on high levels. — CaiusDrewart · 2230 8/2/18
I'm thinking of running this in a Tony deck because of his already astoundingly high combat stat (not to mention that it's appropriate for a bounty-hunter!)--thoughts? Switchblade is still better, but I'm trying to mix things up — Malgox · 17 10/2/19
2

Gotta say, this card is getting very appealing as a key first weapon in a Leo Anderson deck.

Leo starts with a good Fight value of 4 and will likely have at least one Beat Cop in his deck and hopefully out early, so that's Fight 5. Add a Guard Dog to that for a missed swing and you're doing damage anyway...and have a Survival Knife in the other hand and you're really starting to rock.

With a lot of enemies having a Fight of 2 or 3, even Leo and one Cop will give him a 5 vs. 3 test, and that's easily upped by getting Lone Wolf going with Keen Eye or Physical Training.

And when you get into big bosses, many have Retaliate anyway.

This is an underrated card....cheap as heck and a guaranteed 2 Damage with no ammo drawbacks.

Krysmopompas · 104
I see very little reason to run this card over Machete even in Leo Anderson. Machete just seems to be a lot better in many ways. Yes, some bosses already have retaliate, but others don't and there are many strong enemies with high fight value who also don't have retaliate. If this card gave you a +combat bonus to the attack it might 've been worth consideration, but as it is, it is very unappealing. — matt88 · 2046 4/18/19
For me, the ability to engage with more than one enemy at a time and still do 2 damage on a hit is great especially early in a cycle. In games with 2 or 3 players where one is just going after clues, it’s even more appealing. Machete penalises you for taking on more than one at once; knuckleduster doesn’t. IMO if you manage your Fight this is a great card. — Krysmopompas · 104 4/18/19
If you'd said Mark instead of Leo (and if Mark could even run this), I could maybe agree with you, but a native fight of 4 doesn't feel like enough. Also, remember that you only get to use the survival knife's reaction during the enemy phase, so you get no benefit from it when you miss your knuckleduster swings. — TheNameWasTaken · 3 4/18/19
Weak card...weak review — Alogon · 594 4/18/19
Weak card...weak review — Alogon · 594 4/18/19
On a lower difficulty where +2 could be enough, and in a multiplayer game where you may have to face multiple enemies on a regular basis (the only reason to consider this over Machete), it may be worth giving this card a second look. I'm not sure how unwieldy the enemies may be in four player, but with three players, we very rarely have a situation where Machete isn't good enough. That said, I don't agree that this is a weak review. — cb42 · 26 4/18/19
I think if this didn't take up a hand slot (y'know... you can hold a gun while wearing these, maybe), I think they'd be as good as people keep trying to make them. With enchanted blade out now, i don't think Guardians even need to consider this. Non-Guardians might like it if they can't get machete, but they'll really miss the extra accuracy. — SGPrometheus · 313 4/18/19
I think it will see more play the day a Rogue with 4 or 5 combat comes out! I look at you, Michael McGlenn, come here! — mogwen · 217 4/23/19
I've been playing it more and it's grown on me too. Not nearly as solid as machete but works really well in niche builds like "bought in blood" Leo (i.e. leo with hired muscles, treasure hunters, etc.) — Gyara2020 · 1 4/23/19
The only place I've found so far for Knuckleduster is with Wendy and The Red-Gloved Man. At 6 combat she doesn't miss the lack of a combat boost so much, and TRGM can soak any retaliation (or she can evade first). — Herumen · 1481 4/25/19
having to A) Engage with an enemy and B) make sure it's the only enemy you engage with are big reasons why I don't like Machete as much as others. If your guardian has to run across the map to save a Seeker (for example) from an enemy, you have to move, engage, and fight, hoping you're not dragging another monster you're already engaged with you. I stand by Knuckleduster's 2 Damage being better than Machete, at least on Easy/Standard, the only mode I play on! — Krysmopompas · 104 4/26/19