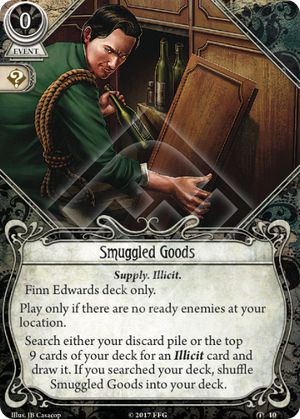 This is an insane card. Tutor for 0 resource is obviously. Comes along well with Finn's other signature Finn's Trusty .38, which will often be your first target. Very soon, you are likely to search your deck for Lockpicks, maybe other/heavier weapons.

I really like to put it back in deck, delay your weakness(es), get a chance to use it again. Very versatile card, it can be used as a tutor, refill for weapons or Lockpicks, shuffle if you know that your weakness is on top, and even you had 0 Illicit card in your deck, still a ? Symbol -which will almost never happen cause of Finn's Trusty .38.

I like to play a heavy-drawer Finn and the ability to put this back in the deck is a good way to avoid reshuffling it. Helps me to: -Avoid the horror, sometimes a critical issue for Finn. -Bury my weaknesses. -Keep my discard pile for Scavenging By the way Caught Red-Handed can most of the time achieve the same purpose.

According to the wording, I guess that you can search your deck, even if you don't have an Illicit card in it and then put back Smuggled Goods in it. Can you though, search an empty deck ?

LeFricC&#39;estChic · 79
You dont affect weakness occurrence at all mathematically. You only shuffle this in your deck if you searched your deck, and if you’re using an action just to place a card in your deck (not taking a card from it with the search effect), then you’re making a very minimal impact on fattening your deck at the cost of an action, which is definitely not worth it. If you dont have anything to grab, just commit it. — StyxTBeuford · 12385 1/21/21
If you are instructed to "search" an empty deck, this has no impact on the game state. Additionally, a card effect cannot shuffle a single card into an empty player deck. And you aren't allowed to attempt an action that has no potential to impact the game state. So I don't think you could play it if your deck was empty and your discard pile had no Illicit cards. But, in the absence of "must", you are not compelled (when resolving a choice) to pick an option that can impact the game state, so I suppose if you did have an Illicit card in discard you would be allowed to play this and choose to search your empty deck instead. — Yenreb · 9 1/21/21
It's alright on it's own, but when you can avoid the action cost with Fence, it's a lot better. Fence is also illicit, so can be tutored by it. — Zinjanthropus · 157 1/22/21
This card is one of the reasons I feel Backpack is a star in a Finn deck- even moreso than Trenchcoat (or in addition to it)... he's got plenty of reasons to go asset-and-supply heavy, his other signature is ALSO Backpackable, and they can dig this up for further tutoring or discard-recovery. — HanoverFist · 310 1/26/21
I never noticed that this has the trait Supply and could be tutored with Backpack. Fantastic synergy. — TWWaterfalls · 709 1/27/21
Yep, you could find Smuggled Goods or Contraband with a backpack, in addition to the obvious E-Cache — Zinjanthropus · 157 1/30/21
4

This is the rare signature card that gets better the more XP is in your deck. Because it does one thing that rogues don’t do very often: go through the discard pile.

Most of the illicit things you’re going to find are guns. (It will also get you back your Tennessee sour mash, if you use hair of the dog to deal with the encounter deck.)

But for an action, you can get back that expensive 3, 4 or 5XP card you used up. Maybe it’s time to pick Lupara back up. It doesn’t go into play, it goes into your hand, so if you want to do some Sleight of Hand... Well, why not use it twice? Or even more often, if you have nine cards left in the deck and you know the good stuff is down there?

The “no ready enemies at your location“ might be a problem… If this wasn’t the card of Finn Edwards, dodger extraordinaire. He even has a signature gun! So remove the side panel and take out something that will really give those deep ones a surprise.