Miti
Trama. Stage 1
Destini: 8. Indizi: –
BE TRUE TO YOURSELF, AND SEEK THE TRUTH IN OTHERS.
BALANCE THE SCALES.
YOU SHALL BE CALLED TO ACCOUNT FOR YOUR ACTIONS.

Forced - When you draw a Monster enemy: Instead of spawning it, set it aside, out of play, and place 1 doom on this agenda. This effect can cause this agenda to advance. 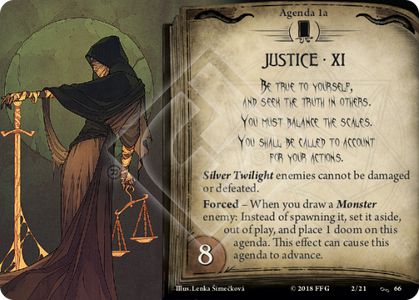 Pulled into the Shadows - Retro

Trama
You have uncovered some of the evidence pertaining to the disappearances, but the truth has yet to be unveiled.

If the investigators do not possess 3 clues as a group, they lose all of their clues.

If the investigators possess at least 3 clues as a group, they must spend 3 clues and spawn the set-aside Josef Meiger enemy at the location other than the Entry Hall that is farthest from all investigators.

Open the Campaign Guide and proceed to Interlude I: A Record of Those Lost.

Once this interlude has been resolved, remove all clues from each location in play, and advance to act 1b. 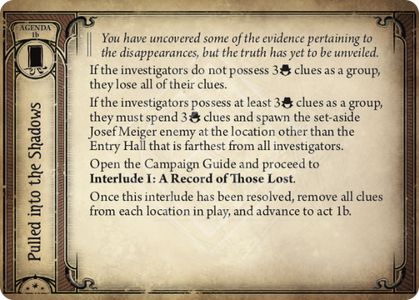