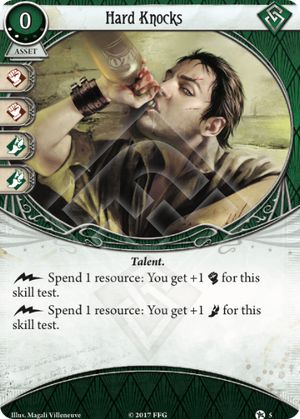 All of the Level 2 talents have the same flaw compared their Level 0 version - at Standard difficulty, the XP only saves a few resources on a card that your probably are using because you have a lot of resources. If this card were Level 1 and otherwise printed as is, I’d consider it more often. I wish the Level 2 talents had the Fast keyword to remove the action cost.

That said, Hard Knocks is the one of the few Level 2 talent cards that isn’t made obsolete by the Dunwich permanents. As fun as Streetwise is, you can run out of resources or only have one left. That happens to me often in Jenny, so having a zero cost talent that allows you to pump Agility and Combat at +1/resource can be okay. It obviously won’t help you with investigating, like Streetwise.

Parallel "Skids" O'Toole is another investigator that can use this to buff fight tests when critical and you can keep the Level 0 version in your deck if you want.

There are a lot of good XP cards that Rogues can spend XP on. This card just seems like a luxury card - if you’re already kicking the scenario’s butt, it might be nice to have.

halforange · 3
The Level 2 talenst still see much more play than the level 0 ones. First, because paying 2 resources for a card, you then have to pay further resources to benefit from, actually matters quite a bit. (Although in comparison Rogues have the easiest time of all classes to do so.) Second, because the second copy is always a card to commit, not play, should you draw it. And level 2 has double the icons. Also, if your investigator can take level 2 Guardian cards, they have great synergy with "Well Prepared", and if you plan to go for level 4 further down the campaign, they are a reasonable steping stone intermediate investment in XP. — Susumu · 271 9/29/21
We've also just gained a niche use for them in decks that plan to run Down the Rabbit Hole and the Level 4 talents. Since its an upgrade in two steps, starting with the level 0 prevents the extra cost and allows for up to 2 discounts! :) (Maybe not super relevant for Hard Knocks specifically, tho.) — Death by Chocolate · 1251 9/29/21
That's true, even if you don't plan to upgrade to level 4. If you go down the rabit hole, you are likely willing to take inferior level 0 cards just for the cheap upgrade. Could also been said for Blackjack, Switchblade, and what have you. When playing Carolyn, I also slottet "Clarity of Mind" level 0, just for the "Arcane Research" discount. — Susumu · 271 9/29/21