Dianne Devine
Knows What You're Up To

Forced - After any investigator performs a parley action: Move Dianne Devine once toward that investigator.

Victory 1.
Felipe Escobar
Return to the Path to Carcosa #23. Return to The Last King #3. 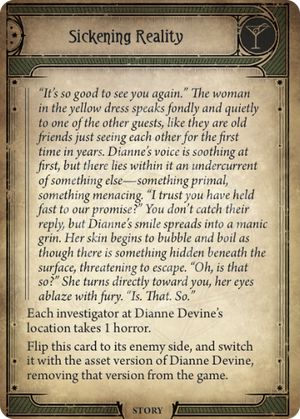 Flip this card to its enemy side, and switch it with the asset version of Dianne Devine, removing that version from the game.

“It’s so good to see you again.” The woman in the yellow dress speaks fondly and quietly to one of the other VIPs, like they are old friends just seeing each other for the first time in years. Dianne’s voice is soothing at first, but there lies within it an undercurrent of something else—something primal, something menacing. “I trust you have held fast to our promise?” You don’t catch their reply, but Dianne’s smile spreads into a manic grin. Her skin begins to bubble and boil as though there is something hidden beneath the surface, threatening to escape. “Oh, is that so?” She turns directly toward you, her eyes ablaze with fury. “Is. That. So.”
Return to the Path to Carcosa #23. Return to The Last King #3. 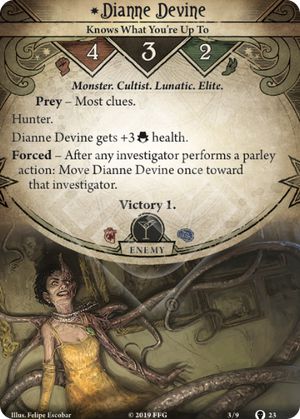