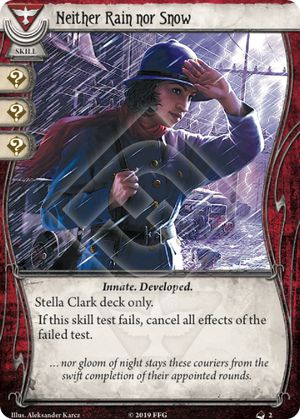 Can't argue with getting 3 copies of a skill in your deck. The ability to cancel the effects of a failure are really just icing on the cake. In addition, it is a Survivor card, and an innate skill, so it can be recurred with either Resourceful or True Survivor.

I mean, really, what more could you want?

If for some reason you feel like 3 copies of this aren't enough, upgrade into Grisly Totem (3) and become the immovable object.

Big Iron · 81
If I understand the mechanics correctly, "Neither Rain nor Snow" would not be returned to your hand by Grisly Totem, because the return is an effect of the failed test, which is cancelled by the skill card. — Gobblegobble · 1 6/17/20
Incorrect. Since they have the same triggers, you can choose the order that the card effects trigger. — brandonglee123 · 1 7/1/20
For example, suppose you commit "Take Heart", "Neither Rain nor Snow", and use the effects of Grisly Totem (3) on a nasty encounter card and autofail. You can choose to trigger Take Heart first, then Grisly Totem, then Neither Rain Nor Snow to cancel the encounter card failure! — brandonglee123 · 1 7/1/20
But if you trigger grisly totem first and return NRNS back to hand, does NRNS still cancel failure effects? — niklas1meyer · 1 7/19/20
niklas1meyer: As I understand it, unlike Silas' ability or Try and Try again, Grisly Totem resolves during step 7 of the skill test, which is "apply skill test results." Given the wording of Grisly Totem and Neither Rain Nor Snow are both "if this skill test fails," I would assume that cancelling the effects of the failed test would also resolve during step 7, meaning that you could also get them both to trigger. I don't know for sure though. The combo is confirmed to work with Take Heart, at least. — Zinjanthropus · 155 8/2/20
For additional silliness, you could maybe try to convince a mystic friend to commit Seal of the Elder Sign to the test, thereby guaranteeing that you could fail the test, heal 1 damage and 1 horror, cancel the results of the failed test, return NRNS to hand, then get an extra action. Probably not worth it, though. — Zinjanthropus · 155 8/2/20
Can someone clarify what "all effects of the failed test" mean. Does that include effects that would trigger if I drew one of the special curse tokens (cultist, for instance) that might trigger something like taking horror, discarding cards from my hand, etc.? or only effects directly related to a card (like a treachery) — Giffdev · 39 8/5/20
@Giffdev If a token says, "If you fail, take 1 horror," and you would fail the test, don't apply those effects, as they are a result of the failed test. Likewise, Retaliate and Alert won't be triggered on failed attacks/evades. — SGPrometheus · 277 8/20/20
The most powerful part of this card isn't the wilds. It's the ability to basically ignore any encounter cards that involves a test. And it can be committed to someone else's test. These should Only be used vs Treachery cards. — Taevus · 332 8/20/20
Is this card can cancel retaliate or alert or miss attack to other? — williamz · 1 8/28/20
If you fail after commiting this do you get to trigger Stella's investigator ability? (Since it's "after" the test) — OnTheNightrain · 2 8/28/20
You cancel the effects of failure; you don't cancel the fact that you failed. — SGPrometheus · 277 8/28/20
I'm willing to wait on an FAQ clarificiation of timing this to selectively cancel effects, but tangential to that: How the heck do you expect to be regularly getting this back with Grisly Totem - you just gave yourself +4 to the test! — Death by Chocolate · 581 8/29/20
So if you were to use this on A Test of Will (2) and you were to fail, would NRNS prevent you from having to exile it? — Wolfyjevjev · 1 9/12/20
@Death By Chocolate: There is Drawing Thin. @Wolfyjevjev: As I understand it you can, in fact, cancel the Exile effect of on that card, as it's the result of a failed test. — Zinjanthropus · 155 9/24/20
Does this card cancel getting horror from remains ? So is the respective sentence on rotting remains an "effect of a failed test" ? — fallaway · 1 10/15/20
Yes, if you commit this to a Rotting Remains you are not taking horror if you fail. I do want to add that you CAN'T combine this with the Survivor Grisly Totem, since both cards have the same timing window (step 6) AND they are mutually exclusive. Which is to say, if you fire the ability on the Totem, you return NRNS to your hand, and then you can — wern212 · 107 12/19/20
Continued: you can't trigger Neither Rain Nor Snow since it is no longer committed. If you instead use the ability on NRNS first, you end up canceling the ability of the totem to return NRNS to your hand. — wern212 · 107 12/19/20
wern212 - as long Rotting Remains are going to be failed and you have already chosen to use GT choosing another icon with committed NRNS for this test, You can with no problem return that card to Your hand. Card has been committed, during and before you did fail this test and it is not any more after you failed. Timing for resolve of negating negative effects and getting card back are timed on same moment and therefore you can chose what is going to be first. — Bany · 14 12/19/20