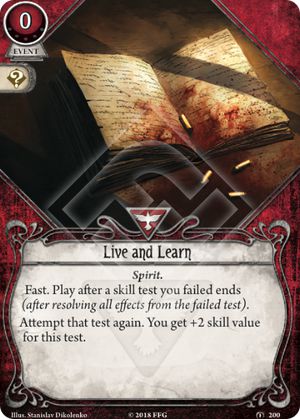 What a great card! Lucky! is a great card and this card will not change that, but it's so nice to have a card that fills a similar role to Lucky! while at the same time not being the same and still having its own space. I'm currently playing an Ashcan Desperate/Dark Horse/Yaotl deck and I'm taking out my Lucky!s because they cost one resource and have no icons in a deck that discourages having resources and encourages having cards with icons in the discard pile. They synergized badly with the deck. This card (while not necessarily getting along with Yaotl) is a great replacement in that deck.

In general, it's very well balanced with Lucky!. While Lucky! gives you a chance to pass a test when you would have failed after you've seen the token, Live and Learn lets you weasel out of an auto fail or other really bad draw. Lucky! costs a resource, while Live and Learn still resolves side effects of a bad test and does not guarantee success (or further side effects of another failed test). But it's free!

I'm happy to see the designers make a card like this, and I've enjoyed playing with it.

NTGuardian · 6
I agree--I see this card as a slightly worse Lucky!, but it's not inconceivable that some decks could prefer this one, or could want both of them. — CaiusDrewart · 1627 8/30/18
Aren’t you overrating this card? Basically it just grants a free action after a test is failed and +2. You still lose all Ressources and cards committed. Might be useful if you built your deck around failing, otherwise I don’t see this cards greatness. — Django · 2361 8/30/18
It's great, if you don't invest heavyly into tests, like Dark Horse Pete would — Adny · 1 8/30/18
@Django I think that committing everything while Live and Learn is in hand is not a point of this card. In my opinion the best thing to do with this card is: attempt to the test and fail it, reap rewards of failure without losing an action (Rabbit's Foot, Look what I found!, even Oops! looks way better when played this way), then pass that test with skill bonus. This card is just a sweet addition to fail-to-win archetype. — KptMarchewa · 1 8/31/18
Yeah, I think it is especially useful for the situations where ammo costs are spent such as when shooting with your ornate bow and miss the mark, or you are tight on actions for an evade or even a single point of damage to keep going with your turn, but come up short. — Bronze · 104 2/7/19
With Wendy and her amulet, could you attempt the same test 3 times? First time normally, then with her ability discarding Live and Learn, then by playing Live and Learn from the discard pile using her amulet? — bigstupidgrin · 6 3/11/19
4

This is a bit of a tricky interaction, so I apologize for any confusion here. I agree it’s a bit ambiguous. I think the ruling that makes the most sense here is the following:

Again, apologies for the trickiness/ambiguousness. Hopefully this clears up this interaction, as well as clearing up how Live and Learn works in general. Thank you for bringing this to my attention; I’ll be sure to add it in the next edition of the FAQ as well.

This is an extraordinarily good card. It definitely ranks in the top 3 for the Forgotten Age cycle, if not being the very best level 0 card in the cycle. It is good for 3 simple reasons:

A: It plays somewhat similarly to Lucky! in that it lets you play fast and loose with your card and resource commitment to tests. Say for example you can beat a -3 with minimal effort (Agnes Baker Rite of Seeking investigating a Shroud 2 location for example) but there's a -5 in the bag, Live and Learn will help you beat that check with assurity.

B: It protects against tokens. Giving you a retry on that test.

C: It recovers lost time and resources! Namely the action spent to attempt that test and whatever charges, ammo, secrets, supplies, whatever you used on the original test. (In the example above, lets say Agnes Baker drew a -5, with Live and Learn she can try that test again, without spending an extra Rite of Seeking charge, and the +2 from Live and Learn will cover against another -5).

All in all, Live and Learn is the card to pick if you play through some key assets or events, the bigger the gun, spell or event, (or if you just got a good pupper) the better Live and Learn is.

Tsuruki23 · 921
Why would Deduction or Double or Nothing (ie, skill cards) still be present in the second test? The first test has completely ended, so they are no longer committed and are instead in the discard. Is that not right? — duke_loves_biscuits · 604 8/26/18
@duke_loves_biscuits: Yeah, I think all that stuff is gone, which means this card probably falls short of greatness (but it still pretty decent.) — CaiusDrewart · 1627 8/26/18
Basically this card grants another action and +2 to that test. Not sure if it's worth a deck slot over Unexpected Courage, for example. — Django · 2361 8/27/18
This is pretty fantastic for Silas, who will often commit a skill card to a test, and then if if comes up as a fail, pull the card back, and then try again. This card saves him an action in that process, and grants him +2 on the second attempt. — Greatsageishere · 144 8/27/18
Yeah, I don't see why this needs an errata. It says after the test ends, so there's no case to be made for keeping your committed cards active. Still, a card that's almost as good as Lucky!, costs 1 less resource, and can actually deal with the tentacle, is pretty amazing. — Indog · 1 8/28/18
It is also much easier to work with Dark Horse than Lucky. The two best red cards don't play well together. — duke_loves_biscuits · 604 8/28/18
I agree with Django--I don't see how this card is better than Unexpected Courage, even in a Preston deck — Malgox · 12 2/27/19
Unless you can chain it with "Look what I've found" and Take Heart... — Malgox · 12 2/27/19
This deck is far better than Unexpected Courage... It is bizarre that anyone would think otherwise. Analyze it from this perspective: How much does the card increase the likelihood that I succeed when I use it: — FBones · 8266 5/21/19
Sorry, was hoping that Shift + Return would let me put a line break. Okay, just do a simple analysis of how much this card will increase the likelihood of a success when you use it: Unexpected Courage increases your chance of success by 25-30% in typical cases on Hard. The key point is that you do not know beforehand that you will fail. Live and Learn gives you a completely second chance after you fail to succeed, and gives you +2 on top of that. In most cases on Hard that will give you a 85% - 90% chance to succeed when you otherwise would have failed. So Live and Learn is about 3 times better in positive skill tests (i.e., no Retaliate and not during mythos). I admit, there are nuances to take into consideration (taking a second pull from the chaos bag), but there are also nuances going the other way: the investigators who have access to Live and Learn tend to have higher will-power and lower fight/intellect, so they are less likely to be needing boosts on mythos and more likely to need them on bread-and-butter positive skill tests. The real question is not "why not use Unexpected Courage," but rather "why not use Lucky!?" Except for Dark horse decks, Lucky is generally superior. (note that Live and Learn does NOT synergize with Fire Axe because all your money is already spent.) — FBones · 8266 5/21/19
Another way to think of it is that Live and Learn is ROUGHLY equal to Unexpected Courage + 1 Action---as you get a second chance to succeed on the skill test you just failed, but is not useful during Mythos. — FBones · 8266 5/21/19