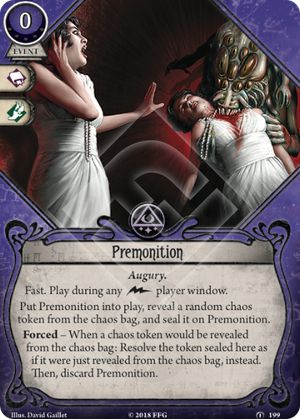 Premonition reveals the next token you're about to draw from the bag. This lets you custom-rig all your modifiers and actions around it.

Got a big action coming up? Play Premonition and-----

-Revealed a 0? Rather then committing everything you have to ensure success enjoy the free success an save your stuff for the next test. This is actually one of the best-case scenarios for Premonition because it will now have netted you a lot of saved resources.

-Revealed an easy to achieve number like -1, -2? Same as above exept a little more costly. You might as well have played an Unexpected Courage rather then Premonition to succeed on this test (or the other skill card equivalents for the upcoming test). Revealing a token you could have accounted for with minimal expense is actually the worst-case scenario, having a high-base statistic to beat as many of the low numbered tokens as possible will synergize with Premonition.

-Revealed a large number like -4, -5? This is where Premonition gets good again, similarly to how Lucky! lets you bridge the gap and beat these hyper-penalties Premonition it this case lets you tailor your expenses to guarantee success.

-Revealed a special icon? In case of scenario specific icons you will now be able to bypass or defend against the token effects whilst still being able to match the numerical penalty. In some cases you might turn the token into an advantage, for example Agnes Baker attacking with Shrivelling to deal 3 points of damage.

-Revealed a token you cannot beat ( for example)? Knowing that you're about to fail you can waste the action on something trivial, get the token out of the way, and attempt the test with a fresh token.

This all will make Premonition seem really really good, but there is a point against it. Whichever use you get out of it from the above you're always spending the Premonition card and this is why it has such a polarizing "good/bad curve", if you reveal a token that still requires you to spend a little cash or a card to succeed (a -2 or -3) then you'll wind up having over-spent to cover a penalty token that you would probably have tried to cover anyway. This all in a faction that typically struggles with card draw (or has some very specific cards that it needs to see) makes it hard to find space for a luxury event like this one.

Two more points: Premonition is free, so it wont weight down an already expensive Spell heavy deck, and it has rather unimpressive icons. A lack of icons means you'll never-ever play it for the icons, playing it to see the token will be better anyway.

Edit: The more I play this the better it gets. A variety of cards synergize greatly. Say you play this early in a round before using Rite of Seeking, you can avert lost actions by doing a different test first or, ifthe token has a decent bonus, you can just draw some cards/gain cash rather then loose the action. Then there's Defiance and Recall the Future that you can deliberately target the drawn token with. If you want to go all the way then you can try tricks like Hypnotic Gaze and try to further manipulate the bag with Olive McBride and the like.

Tsuruki23 · 948
Also works with token reveals that aren't tests - for example, it could let you know if it's safe to play Recharge. — TheNameWasTaken · 3 8/26/18
I agree! I would add that, if the token revealed is a -4 or -5, a better alternative will often be to inentionally fail a low-impact skill test. The Premonition is "wasted," but that's sometimes going to be better than intentionally committing a lot of cards and resources. (FYI, if you put "* " at the beginning of a paragraph, you get a list bullet, which would organize your break-down better than a leading dash.) — sfarmstrong · 62 9/6/18
This card is markedly worse in scenarios where there are tokens that say "Reveal another token...". — Katsue · 8 12/16/18
Another card the has excellent synergy with Premonition is Double or Nothing. You can play this before commiting two vicious blows or quick thinking. — MaximilienQC · 1 3/3/19
3

I've been using this card with Daisy Walker rather than with one of the main Mystics which makes this perspective slightly different. The short version is that I really like the card, though I appreciate that it's not awesome.

So let's start with the basics. I think the icons are better for Daisy Walker than they are for the Mystics, particularly the Agility, so that's something. It's also important to point out that it's both fast and so it doesn't cost you an action as well as it costs 0 resources. This means that the only cost to it is the slot is takes up. The ability to play it at pretty much any point in the game regardless of location or turn order really increases the odds you can use it at a good time.

Now for the more complex stuff. There's lots of times you can use this, but the times that provide a good benefit are much fewer. Reacting to things like nasty encounters haven't turned out well for my group. Typically we've drawn a terrible token and so there's little else to do than suck it up - no amount of committing will help. In fact various of the uses of the card are for nought when you draw a bad token - all that happens is you know the inevitable and so either just fail or end up wasting an action.

There are times when you find out how much you need to commit (or not) and those are nice, but they're often pretty niche. On the one hand you might be really likely to fail so there's a question about why you're doing it anyway and typically you'll just find out that up you're going to fail. In another case you might be pretty likely to succeed and so you just confirm that that works too with no real value. The ideal situation is that it's a challenging but not insurmountable test for which you have enough cards to commit but would ideally save them if you can. However, you must consider that you're spending a card to save cards so you'll need to save at least two cards to make it worthwhile. Hmm. that's a pretty niche case in my opinion. I suppose you might find out how much to boost with something like Higher Education though.

So where does this leave us? Well, it really starts to improve when:

When reading the other review here I saw that this perhaps has a lot more use in a Mystic deck than with Daisy Walker. This is because most spells fit two of these criteria. With Daisy Walker you're generally just smashing out clues so it has less use, but we have been using it with Old Hunting Rifle on another investigator nicely. Some uses are random chances - using it essentially unnecessarily before Archaic Glyphs meant I avoided an autofail that would waste a token - and those are nice but not exactly strong. You can get some utility by using it early on as well - ideally before anyone has started their turn - and essentially help plan your turn. If you get something cool you or someone else can do good stuff, but generally you learn "yup you will fail the test" and so plan around that accordingly.

As I said at the beginning, I like this card and it's fun, but in my opinion its use cases are more situational than I at first thought. It's almost useless for encounters as well as for many of the Big Moments that appear in this game. It's most useful things with limited uses such as spells, items and cards, and things you control that may have bad side-effects on certain pulls.

Octo · 51
Interesting review! I've been running it in a Sefina deck and I'd say it pulls its weight. In fact, I might say Sefina gets more out of it than anyone else who can take it. I've run it alongside Double or Nothing, which encourages you to invest heavily into one specific skill check. Premonition then guarantees that investment, which I think is pretty decent synergy. Sefina's ability means that if you have Premonition under her card , you can be sure you'll have it available when the time comes for the Double or Nothing check. You don't even have to wait for the perfect time to use it. If a good-but-not-great opportunity shows up, then you can play it via the Painted World and save the actual card for the monster check. I'd also quibble a bit that it does nothing for you if you end up drawing a token that would have passed, especially in a double or nothing build. When you're weighing up the idea of a giant monster check with Double or Nothing , Quick Thinking , Vicious Blow etc , you have to weigh the payoff against the consequences of failing and maybe that leads you to spread the various resources across a few checks where both the benefits and costs aren't quite so huge. But having Premonition ready changes that risk-reward calculation quite a bit and I'd say that's a meaningful effect. — bee123 · 16 3/22/19
In my opinion this is almost entirely a multiplayer card, and best played in the window at the start of the investigation phase, before anyone has yet taken their turn. Seeing what token will come up for the first test this round lets you decide whether the first turn should go to someone who can pull off something huge and now be certain that that huge thing will succeed, or to whoever can overcome a huge penalty with the least effort, or to whoever can afford to burn an action on an autofailed test. — TheNameWasTaken · 3 3/22/19
"I've been running it in a Sefina deck and I'd say it pulls its weight." — Octo · 51 3/23/19
Oh... that didn't do what I expected .... can't undo it either. Anyway, yeah, sounds like it's ticking a lot more of the boxes in a Sefina deck - both the Rogue super combos and the precious Mystic spell resources. — Octo · 51 3/23/19
There's actually a player window before every taken action, so it doesn't have to be the first action of the first investigator. — Nils · 1 4/29/19
Yes, but before the first turn allows you to look at the token and decide whose turn it'll be. — Ektheleon · 20 5/5/19
My buddy runs this, while i play Keen Eye Leo Big Actions. Knowing what I'm going to draw opens up so much rediculous actions with double or nothing. — CecilAlucardX · 2 5/12/19