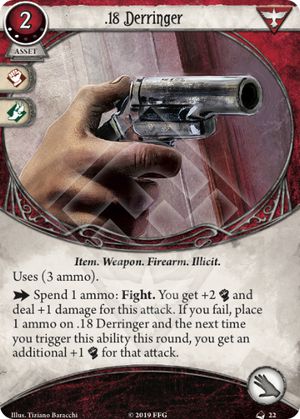 Extra shot, less cost. The perfect sidearm. The upgrade has a significantly less characterpool but those who can use it, love it.

Note that the ammo generation combo with Live and Learn does not gain the inbuilt +1 to hit from the .18 Derringer ability, because the extra +1 to hit triggers the next time the action on .18 Derringer is triggered.

I think this card is ridiculous. Seems to me like some serious power creep has been introduced with the investigator decks, and this is a prime example of it. All previous survivor weapons have followed an archetype. They're potentially powerful but all come with major drawbacks. Baseball Bat takes two hand slots and can break at any time, Fire Axe only gives extra damage when you burn through all your resources, Meat Cleaver requires you to take horror to trigger the extra damage and only gives a meaningful fight boost when you're already riding the sanity line, Old Hunting Rifle can jam. They're all good, but you need to take the rough with the smooth. This is nothing like any of those weapons. There is no rough. It's insanely overpowered for 2xp.

2 resources to put it into play, +2 fight for +1 damage and not only do you get your bullet back if you miss, doing so also makes it easier to hit next time. So this is 2xp and 2 resources for a guarantee of 6 damage. No other card in the game offers that kind of value. Oh, and this comes in the survivor class where it can easily be recovered from the discard pile and played again. I honestly don't see why any survivor except maaaybe Wendy would ever leave this out of their decks. It's the ultimate auto-include.

I think it will prove to have been a mistake to start releasing obviously OP cards like this. It smacks of an attempt to cash in. The starter decks are pitched as being aimed at new players but I'm willing to bet it'll mostly be experienced players who buy them so they can their hands on cards like this one.

Sassenach · 134
Most experienced players are collectors who buy everything anyway, or at least attempt to, so "attempt to cash in" is kind of a wacky comment, especially when so many of the now Taboo cards are from the *Core Set*. — Soloclue · 1828 4/9/20
I agree that this card is way better than previous survivor weapons but I think that needed to happen. It is very difficult to build a consistent Silas deck that can be the groups main fighter. — Someguy11 · 1 5/3/20
It's clearly OP. This needs to not give the up front +2 and either make it a +1 or make it a +0 and give the followup a +2. I think that makes it a bit less just straight OP. Probably the latter due to the ammo being saved. The taboo cards from the core set is because they were just getting into their design paradigm. This seems clearly like it's back to the old core tabooed design it's basically a guaranteed 6 damage. — LikeWise · 1 7/9/20
well if you compare strictly numbers on the card, its a very very powerful weapon for sure. But don't forget it is also only available to investigators who doesn't do that much fighting. So I don't think it's OP in that sense. I mean its super great in a Yorrick deck... but does it makes Yorrick OP ? nah... — GWItheUltimate · 1 10/9/20
I like that it fits into a different archetype, since most survivor weapons prior to this were of the "do more for less" variety, while the .18 Derringer is a card that plays into the Survivor's ability to "mitigate failure". The problem, if there is one, is that it the two XP you spend on the upgraded version here buys you a lot. Most other weapons with a decent base version get + 1 ammo, or - 1 cost, or +1 fight, alongside a minor or moderate special effect. The .18 Derringer here gets - 1 cost *and* + 1 ammo *and* its special effect gives you a conditional +1 fight. That — RichardUptonDeckman · 16 10/29/20
That is a really good deal! It's in the territory of cards like Blackjack and Switchblade, which were pretty poor level 0 cards, and I don't think .18 Derringer (0) is poor. It doesn't help that a 2-shot, 3-cost gun becoming a 3-shot, 2-cost gun feels like such a dramatic change when adding 1 ammo and losing 1 cost - it's super-efficient! It's not totally out of the realms of the design space, however... some of the 3 XP upgrades on level 0 weapons are this good or better. There's also the fact that while this is certainly a great little gun, it doesn't do anything particularly spectacular - Survivors have always been able to pay down two resources and swing at +2 Fight for 2 damage a hit. This lets you do it one handed, and with a higher floor on your effect, but it's still got a lower than ceiling than baseball bat, which can hit four or more times with a bit of luck and/or a Will to Survive turn. — RichardUptonDeckman · 16 10/29/20