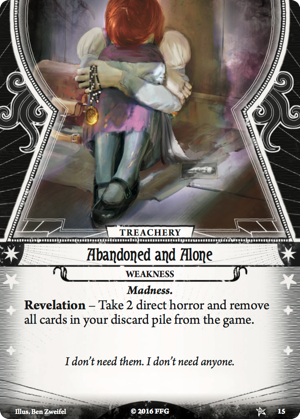 Despite the heartbreaking imagery and flavor text, Abandoned and Alone is not that critical a weakness like some of the others are. Yes, taking two DIRECT horror could be game-ending, but knowing that this is in your deck, you basically make plans to ensure you have that two horror buffer (and with Wendy's starting Sanity of 7, this should not be TOO hard). Of course, sometimes you just have to take all that horror, which results in you being scared of being defeated by drawing Abandoned and Alone.

Abandoned and Alone removing all of your cards from your discard pile can range from inconsequential to devastating; the primary determination of which is whether or not you were planning to play Wendy's Amulet, or if you had something to pull out with Scavenging. Scenarios in Arkham Horror are generally so time-limited that you rarely draw through the entirety of your deck; making the reduced number of cards in your deck when you reshuffle a non-issue. As more investigator cards come out, we may see cards that interact with the discard pile, which may be an issue for Wendy decks.

There are not many solutions to the discard problem, but there are solutions to deal with the Horror aspect. Probably the best solution in the current Dunwich Legacy cardpool is to have Wendy put out her best ally buddy, Peter Sylvestre, to help deal with other sources of Horror (to ensure she has the buffer needed to take that direct damage). If Wendy has other allies she'd like to have (Leo De Luca and Cat Burglar to name a few) without investing in the additional ally slots that Charisma has to offer, then she could instead use a Smoking Pipe to help convert that excess horror away.

After this card is resolved, it's placed in the now empty discard pile. So if this is the last card in your deck, it removes the remaining discard pile from the game when you draw it and when you're required to draw a card again, it's the only card in your new deck. So you take 2 direct horror each turn, because it's the only card to draw each time.

Django · 3177
I don't understand that recursion, can you explain it further? Because once the treachery is in your discard pile, how can you ever draw it again? — banania · 329 9/1/17
Because once your deck is empty, you have to shuffle your discard pile, which becomes your new deck. — bricklebrite · 178 9/1/17
Actually, it's even worse than that. You would take 2 horror from that card, but also 1 more horror from recycling your deck — SilverFox · 1 4/5/19
I would have to disagree. From the Rules Reference, p.21: "When an investigator draws a weakness with a player cardtype (for example, an asset, an event, or a skill weakness), resolve any Revelation effects on the card, and add it to that investigator's hand. The card may then be used as any other player card of its type." Please correct me, if I 'm wrong. — Ereshkigal · 1 8/28/20
Please disregard my previous post. I was wrong. From the RR: "When a treachery card is drawn by an investigator, that investigator must resolve its effects. Then, place the card in its discard pile unless otherwise instructed by the ability." — Ereshkigal · 1 8/28/20
0

As cards come out that let you recurse from your discard, this card gets progressively worse. Resourceful, True Survivor now let you grab stuff in the discard and can become borderline (or totally) unplayable because of the risk posed by this card removing all the viable targets, Scavenging has always been a liability and these cards are only gonna grow in number. Thankfully Wendy is getting some solid cards like Waylay and Lucky Cigarette Case to slot next to Backstab and Rabbit's Foot and thus all 4 cards gain consistency.

Here'S hoping Wendy gets a novel though because I really would like to try True Survivor survivor on her.

Tsuruki23 · 1823
I've created a replacement weakness for wendy, which i posted on boardgamegeek for the same reason you said: https://boardgamegeek.com/thread/1950114/wendy-adams-replacement-weakness — Django · 3177 6/20/18
I think this issue will be less of a problem once upgraded lucky rabbits foot comes out. Digging for this weakness is already not a bad idea on Wendy, and once it’s in the discard you’re unlikely to see it again. — Difrakt · 931 6/20/18
Yeah, I'm really excited for Wendy to eventually get alternate cards. This weakness really takes away deckbuilding options and makes her less fun to play (though I love the art and flavor text). Would be nice to have an alternative. — CaiusDrewart · 2230 6/20/18
Drawing cards makes it more likely to shuffle your deck and draw her weakness again... — Django · 3177 6/22/18