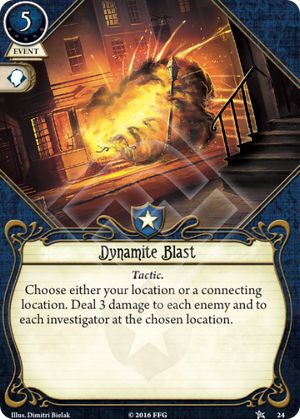 Do not underestimate the power of this card when going into war. (and try not to think about the poor poor couriers running this lit stick of dynamite from one city to another)

This seems to be a staple in many protector decks, but truly this card is better used by evasive characters who can disengage or use teleportation cards (such as Elusive or Survival Instinct ) to launch Dynamite from an adjacent room.

While it certainly feels heroic to use Zoey or Roland to draw aggro then blow themselves up, it's often detrimental to the party's success to willingly subject them to 3 damage. Sure, it can sometimes save the scenario, but just as often it can place your best monster-hunter on death's doorstep.

It's far more effective to place it in the decks of the swifter investigators who have resources to spare (Skids, Jenny, Rex) and let them play with the explosives. If the enemies survive then the protectors job is to come back in the room and do clean up.

masonproulx · 70
I take Elusive on Zoey for this reason, and now Leo and Mark can also do it. In fact, poor Roland (and Carolyn) are the only Guardians who can't pull off this combo — Chitinid · 14 1/27/19
How does this work with swarming enemies? Does it do 3 to each separate instance? — Erdjo · 313 4/9/20
@Smeshnik It does! Each swarm card under the host counts as a separate enemy. Similarly Storm of Spirits works the same way. — SGPrometheus · 688 4/14/20