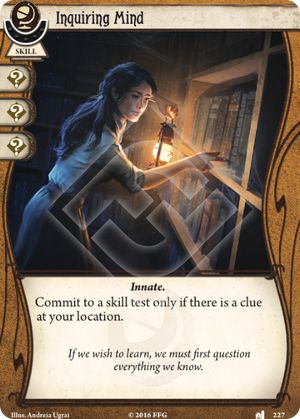 I believed this was a great card. I made the huge mistake to use it instead of Unexpected Courage

Location with clues are indeed plenty during the game, but what is the purpose of the Seeker class ? Empty them. And when it's empty, this card is a dead weight in your hand. You'll have to pay attention not to end your turn on an empty location, which requires too much planning and is often counter productive

Unexpected Courage will be enough in 80% of times, while half the time, Inquiring Mind will be completely useless, often at the wrost moment (Encounter deck draw)

Maybe in addition to 2 copies of Unexpected Courage, but even then, I'm not convinced.

NotSure · 5
It IS a great card, but yeah, not as a substitute of Unexpected Courage. It's great in Seeker class, especially if you have cards that like oversucceeding like Archaic Glyphs: Guiding Stones, or Deduction 2. Rex should especially consider it due to his special ability. Effects that place clues on your location also make this card more attractive. In my last run with this card I was playing a Roland Banks deck in the Carcosa cycle along with Quick Study and it almost never was a dead card in my hand. — matt88 · 988 9/20/18
Quick Study might indeed change my mind. For the oversucceding bonus ? Yes, but only reliable for clue gathering if you don't a have clue dropping talent/ ally. In the end, It looks like the card is mostly used for 3xintelligence test (except maybe for Roland), while the real power should be it's versatiliy. — NotSure · 5 9/21/18
My thought process on this card when I put it in a Seeker deck (which is something I always do) is that I can always use it for investigations (which is the most common thing a Seeker does) and maybe I can use it for treacheries if I'm on the right spot, which is not totally necessary since you also have Higher Education (which is a priority upgrade most of the time). Then it can be useful against certain treacheries like Locked Door. For this one specifically it's especially useful since the location it will be attached to will always have clues, so you can always Inquiring Mind to help break it. — matt88 · 988 9/21/18
Meant: You can always play Inquiring Mind to help break it (Sigh!) — matt88 · 988 9/21/18
While some investigators can run this instead of Unexpected Courage, it can come back to bite you. I think with enough mobility, you can certainly run this over unexpected, or if you have effects that let you drop clues. — Myriad · 651 9/28/18
2

A card that is as strong as it is simple. Most locations in this game have clues on them, and you will be doing plenty of skill tests on such locations. Inquiring Mind's three wild icons and ability to boost any investigator (unlike, say, Rise to the Occasion) provides a lot of flexibility to the team. Whatever the situation is, as long as there's a clue in the area, Inquiring Mind will be a significant help. It can give almost any investigator at least a half-decent shot at doing most things, even on Expert, and that's pretty nice.

Although it is a virtual certainty that, no matter the scenario, you or your teammates are going to take multiple important tests on locations with clues, this card does occasionally peter out late in scenarios when all the clues are gone. Usually you can tell if this is about to happen, and thus commit Inquiring Mind to a test before it deactivates.

If you draw Inquiring Mind after all the clues are gone, it probably won't be very good. But this is going to be pretty uncommon, and in any case this is true of a large number of excellent Seeker cards. I don't consider this a major strike against it.

I suppose there is some synergy here with the Seeker cards that let you drop a clue on your location (Forewarned, Dr. William T. Maleson), but this is probably not a big factor. You don't need to run these cards for Inquiring Mind to be good.

I think I slightly prefer the upside of Inquiring Mind to the reliability of Unexpected Courage, though I don't feel strongly about this. The difficulty level may be a factor here--the higher the difficulty, the more useful Inquiring Mind's third icon will be. Which card is superior is a bit of an academic question, however, because I often just run both in Seeker decks.

As useful as this card is, +3 to a skill test is not quite so powerful that I would use a splash slot on it. There are many higher-impact choices out there. (For instance, if you're looking for a general utility card to help you pass skill tests, Lucky! will be the stronger pick.) It may find itself on the cutting floor as XP cards come in. (But not in Minh Thi Phan; she will most certainly want to run this all campaign long.)