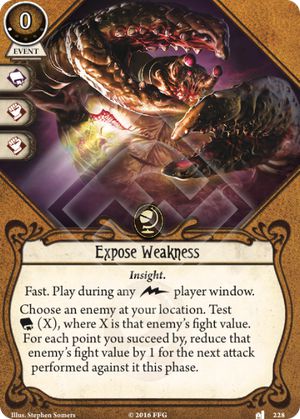 Do you like Jank? Yes? Then sit down and let me whisper these two cards to you. Expose Weakness. Double or Nothing.

Did you get goosebumps? Nuff said.

(Obviously you'll need lots of other combo pieces, how about a Vicious Blow? Backstab? "I've got a plan!")

In the review of Flashlight, reviewer Caius Drewart notes that using the Flashlight on a location to reduce it's shroud value to 0 basically guarantees a success regardless of what chaos token you draw (barring the dreaded tentacle token.) Similarly, this card can, potentially, guarantee the next Fight action against a baddy succeeds (again, barring auto-failure.) I think this card is in the same vein as the Flashlight, since it hedges your bets against the chaos tokens in this way. I might even dare compare it to the Grotesque Statue, Wendy Adams' special ability, Jim Culver's special ability, and Kukri.

Quick Rundown: Daisy Walker & Norman Withers both have 5 Intellect . Carolyn Fern, Finn Edwards, Marie Lambeau, Minh Thi Phan, Rex Murphy, and Ursula Downs all have 4 Intellect . If you succeed the Intellect test with flying colors, Expose Weakness basically lets you trade out your Combat icon for your Intellect icon for a single (the next) attack. And remember, if you reduce the enemy's Combat to 0, success is basically guaranteed, meaning you get a minimum of one damage in.

In some sense Expose Weakness helps Seekers deal damage, making it similar to Mind over Matter or "I've got a plan!", and even Strange Solution: Acidic Ichor. Let's compare these four cards:

I also think it is a mistake to think Expose Weakness is intended to be used on boss monsters. Maybe it was, and you certainly can, but I think you'd be better off securing that guaranteed hit on weaker Strength enemies, letting your Guardian buddies take them out quickly and easily: save them ammo, actions, cards, and skill tests. For reference, I counted 45 out of 114 enemies with Strength 4 or greater. Also, even though we haven't seen it yet, I fully expect more Weapon with the "for each point you succeed by" clause, each one of which will combo with this card. Even Spell cards for combat. Expose Weakness may be a situational card, and I think it is definitely for Seekers wanting to play supporting role to their buddies (as they should), but is it jank? I'm not so sure. It's upgraded version is even better, of course.