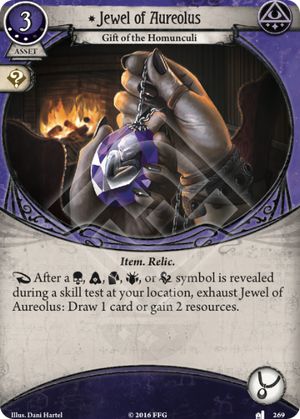 It's hard to use this card because you have to forgo other valuable accessories, and pay a big upfront cost with a delayed reward. But once it is in play, it will likely trigger many times. The chance is almost 1/3 for every skill test in many scenarios. Like Jim's Trumpet, it is better in multi-player because it includes your teammates token draws. In this setting it will likely trigger almost every turn. Every time it triggers, you get +1 or +2 net effect. If you always take the resources, it will repay itself after it is activated 3 times and then start generating profit. This works better if your deck can deal with the upfront cost and want money to pay for pump assets like Physical Training. The other strength is the flexibility to give you what you need.

If you do choose to play with this, it makes Olive McBride and Dark Prophecy better.

I don't really know what to think about this Relic...

Jewel of Aureolus costs 3, which is huge in a mystic deck. And guess what ? At 3 XP, it can only be played by wizards. Huge cost indeed, but for what results ? "Draw a card" or "gain 2 resources" every 1 or 2 turns. It has to trigger 3 times to refund itself (1 card, 4 resources) and 3 times to generate as much value as Emergency Cache. Unless you're playing with many players, it means often 6 turns at least. After that, it's bonuses ! So, it nets a value only if it's played during the early game.

Tell me if I'm wrong, but, playing as Agnes Baker, I often want to play staying power during my first turn. That means, Shrivelling (lvl0, 4 or 5), Rite of Seeking (lvl0 or 4), Peter Sylvestre (lvl0 or 3). And cards to support those assets, Spirit Athame, Holy Rosary... So, Jewel of Aureolus often comes on the board after spells, and doesn't directly empowers it. So, it nets a bonus, yes, but a very thin one.

It's even worse when you draw it during the scenario. It's close to impossible to extract value from it. Hopefully, it has a Wild Icon, so it's not a totally dead card.

All in all, it's more a less a filler, not a premium card you need to get. What's more, mystics have a long list of XP-intensive, must-have, cards. (Shrivelling, Rite of Seeking, Grotesque Statue...) When it will be time to invest in resource-gathering, Emergency Cache (and the upcoming Emergency Cache) might outshine Jewel of Aureolus - at a lesser cost.

Palefang · 45
Correct me if I am wrong, but it triggers during mythos phase for encounter skill tests also.. — XehutL · 39 11/27/17
Its clearly intended for Jim Culver and Multiplayer. It will probably hit every round then. You still need two to have any chance of getting it early. Its not a very niche card. — aramhorror · 397 11/28/17
I meant to say, its a very niche card. — aramhorror · 397 11/28/17
@XehutL : The fact that it can trigger during the mythos phase just add "another" timing when it can trigger. Up to 4 in solo (and unrealistic). BUT, it will be limited to 1 trigger / full turn. Which means even if it triggers during myth, it will be exhausted and can't trigger during your turn. Perhaps very niche indeed... — Palefang · 45 11/28/17
It's a Jim Culver card, assuming you are optimizing around chaos symbol manipulation / exploitation. — KillerShrike · 1 11/28/17
I could see it in Cashfina as a way to power Moxie or Streetwise (or just draw) but for the moment Mystics have numerous expensive assets but no way to turn unused resources into advantage (less grounded, which isn’t great) — Difrakt · 666 11/28/17
Sefina cant play this card. She is restricted to max 2 xp cards. This one counts 3. — aramhorror · 397 11/28/17
Ah right, of course silly me — Difrakt · 666 11/29/17
I saw this card in action yesterday, in a 4-player Expert game Night of the Zealot, Finale in a Jim Culver deck with 2 Grotesque Statues and the Jewel. The Jewel's ability was activated every single rounds. We must have played aprox. 15-20 rounds. So it generated at least 30 coins. It really enabled Jim to play his Statue, and still boost his checks with Arcande Studies. It still takes alot of time to setup, so its only viable in multiplayer decks, with other players who can cover for him/her during the early game. — aramhorror · 397 12/1/17
*I meant tos ay: To play his Grotesque Statue over and over again, with Scavenging. — aramhorror · 397 12/1/17
Yeah, I see this as grossly overcosted at 3 XP. — CaiusDrewart · 1588 1/5/18
i have a Jim deck with indebted as the basic weakness. this card helps me to get some money back, so its worth the cost. — newbie_a · 1 4/5/19