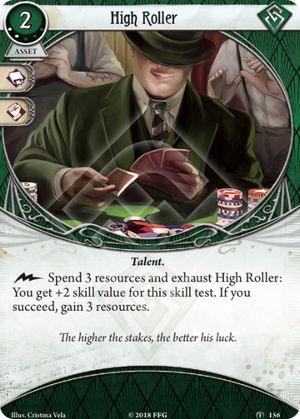 This is a fun asset to analyze. I think of all of the Boundary Beyond 'boost 2 assets' this one ties with Well Prepared for second place behind Cornered for general strength.

What's neat about this card is that if you succeed you lose nothing and can take another test with the same boost, but failing heavily penalizes you. This means 3r initially spent buys you not only the initial +2, but another +2 if you succeed that first test, another +2 if you succeed the third etc. This means we can easily analyze how much the 3r cost gains you through application of the Geometric Series! so a single commit of 3r will give us 2* (1-r^n)/1-r value, where r = our chances of success (assuming all tests are the same chance of success, a big assumption but it only gives us a general guideline)

If you take lets say 8 tests at 0.5 chances of success you're getting roughly +4 boost out of it. That is nearly streetwise levels of efficiency, but without the intellect or agility test restriction! not bad, but then again not great.

if we increase to r = 0.75 however (which is a roughly good approximation for what most investigators want to test at) you're getting +7.2 value spread out / 3r which is more value than Higher Education.

Now there are nuances involved. Not the least of which is that if you're running a 'succeed by two' deck this is a massive enabler, turning your would-be successes into success by 2s. Additionally this card has significant swing, even if you have a good chance of passing losing 3r if you only have 5 can be brutally punishing. Fortunately Rogue's are masters of hoarding up big piles of cash very quickly.

I think the biggest downside though is that this card is very very poor at getting you back from behind. It needs to sit atop a powerful engine of cards already getting you to the 0.5-0.75 success range before it can start to contribute real value. Again though, using the first half of a scenario to set up and the second half to sprint full-speed through the scenario is a valid Rogue archetype so purchase this accordingly.

Difrakt · 931
Your analysis misses the fact that the card exhausts when you use it, meaning youcan only use it for 1 test per round. Still semi-decent for one test, especially when paired with other rogue cards (see: Double or Nothing), but not at the level of Higher Education. — SGPrometheus · 339 8/24/18
It does not miss that point, I merely didn’t address it. There’s a reason I referred to 8 tests (accounting for roughly 8 turns) and not 12 or 16 which would be more appropriate for an unrestricted booster. — Difrakt · 931 8/24/18
I'm very disappointed by this card and think I won't run it for few reasons. First, when you want to sprint through a scenario, you need to take 2-3 times the same test per turn as rogue. (Finding clues, hitting monsters...) If you need that +2 for that, you are only allowed to have it once, and so, you have to also rely on something else. Second, you can't rely on this as you can rely on permanent streetwise, and it does cost an extra action and 2r to come into play. Means, 5r to start dring something. Third, this is a high gain but high risk gamble. If you want to rely on this often, there is a slight chance you might loose 2 times in a row and never recover from such a blow. But, if you don't heavily rely on this, it is not efficient at what it does, statistically. In the end, I think this is unreliable and I would prefer building a deck and strategy without it. — Palefang · 49 8/24/18
Well chances of failing a 75% chance test twice in a row is 1/16, roughly as bad as tentacles already ruining your day. Furthermore if you fail and bring yourself to too low a resource pool you have the option to hold off using the card until you recover, it's not a case of uncontrollable losses. That being said if you're not a big fan of gambling and fat stacks of cash maybe Rogue isn't your ideal faction (: — Difrakt · 931 8/24/18
Dexter Drake could use this together with #Scrying Mirror to earn quite some cash. — jcdenton · 1 1/21/21
5

True. It's a risky asset to use, but High Roller is very good on standard and not too bad on hard.

The cash juggling is' nt even always a downside, every now and then you stand to double your bet via Double or Nothing.

The problem with this card is that you really want to keep overcommitting, you can't really risk using this just to net a +2 over the difficulty, you need to go higher if only to ensure you get the investment back, which is perfect when you run a gun like .41 Derringer or Switchblade or want to draw with Lucky Cigarette Case. In these cases youre already overcommitting anyway!

Tsuruki23 · 1823
To some extent, has anti-synergy with Leo (de Luca) in that you dont want to be aiming for lots of little attempts, youd much rather have one big attempt per turn that suceeds, eg using Beat Cop, Dr Milan, Cat Burgler, Peter etc is better. Sure Gamble, a great card anyway, works well here as it can swing your 3 credits back as well as recover the test. As can Wendy and Lucky. — duke_loves_biscuits · 852 7/25/18
2

This card is almost OP on standard difficulty, if you are playing an investigator that can gather resources quickly and have some static +1 skill boosting cards (like the new Lola) Santiago ).

I tried it in my Solo-Jenny Barnes deck on the Carcosa campaign, wich focuses on resource gathering, converting those resources into skill boosts through talents and having a decent amount of static +1 skill boosting allies (like Lola) Santiago and Dr.) Milan ) and amulets (like St.) Hubert's Key ) in play. The set up is a little slow depending on what you draw but once you have it rolling you can hit anytime with relative low resource commitment 8 or 9 in any skill that you are testing, meaning you will only fail to the auto-fail tentacle chaos token. Under this conditions you are normally able to activate this at least 3 times/turns before it fails and you loose your 3 resources, wich for a Rouge is very efficient. I think this will still be good on hard, but I haven't tested it yet. In Summery, if you have the cards to back High Roller up, you will dominate the scenario and steamroll your way to victory (at least on standard :P).

Alogon · 600
Not so OP in my opinion since you have to exhaust high roller! — mogwen · 217 9/2/18
The fact that you have to exhaust the card doesn't diminish it's worth because this card is used to cover skill tests that you can't boost through other talents or to pass tests that are critical to your success. On my Jenny Barnes deck for example I use High Roller mostly to boost willpower and , if i don't happen to have Hard Knocks yet, to boost combat, the other skills, namely intellect and agility, don't need it because Streetwise and my other cards cover them. This card increased the consistency of my deck considerably, I managed to dominate scenarios that in the past I failed at or barely past (I am looking at you Black Stars Rise). Here is a link to my deck https://arkhamdb.com/deck/view/212291 — Alogon · 600 9/4/18
Using this card to boost stuff you can't boost otherwise seems like an approach that would be restricted to low-levels. On high levels, you'd be using this while having a high chance of failing the test, which seems like a recipe for disaster. If this card was going to be useful it would need to complement something like Streetwise. — CaiusDrewart · 2234 9/4/18
As the review states..."almost OP ON STANDARD DIFFICULTY". I think this strategy is still decent on hard difficulty. On Expert it may not work as I explained, but you can use High Roller instead to evade with 11 Agility (3 base +1 from Lola+3 from Streetwise+4 from High Roller) or to investigate with 12 Intellect, meaning you could even survive the -8 chaos token of dread, at least on 1 test per round. Nevertheless it may be better to try another strategy altogether on expert, I have to admit. — Alogon · 600 9/4/18
@alogon. Yah. I do think this card is worth trying on Expert. Using it to get from +4 to +6 or +6 to +8 seems to me to have some potential. It's a win-more card, obviously, but maybe so efficient that it's nonetheless worth it, especially if you're rocking the "succeed by 2" effects. — CaiusDrewart · 2234 9/5/18
If you lose your money on the 3rd try, you've spent 7 "resources" total for a net total of +6 across 3 tests, max 1 per turn, with a "frozen 3 resources" while it's out. That's actually not that great, especially if you were mainly doing Intellect/Agility tests and you took this before Streetwise. You need to get a lot more return on this card to make it playable. — duke_loves_biscuits · 852 9/7/18
Don't get me wrong, it's a decent enough card. I've run it, and probably will do again. However I do think Rogue has a lot better initial options for Pay-to-Win that I would generally prioritize, and even when the card does land, you need to work it quite hard to make it worthwhile. — duke_loves_biscuits · 852 9/7/18
True. You get this card after you have Street Wise and you play/use it after you already have most of your important assets on play. You need a set up to make this card work and ideally you wanna use it in a way that only the tentacle token (auto fail) will make you fail the test. — Alogon · 600 9/8/18