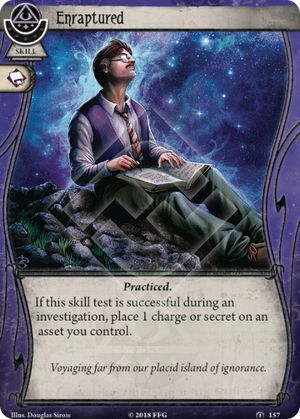 As a card, it's natural to associate Enraptured with spell recharging. But I actually don't think that's where this card shines. The problem is that to trigger the effect, you have to succeed on an investigation attempt. Mystics, the people who could do with some extra spell charges, do poke around for clues reasonably often. BUT, when they do, they usually test Will instead of Lore, thanks to an asset like Rite of Seeking or Sixth Sense or perhaps the upcoming Clairvoyance. Enraptured, meanwhile, only has a lore icon, which doesn't help in any of those cases. You sort of have to go out of your way to trigger it, maybe by taking a basic investigate action with a small boost when you're all set up to take a buffed investigate action from an asset.

But that's not to say the card is a dud! See that tome on the dude's lap? Could it be the nice translation of the The Necronomicon? Has our starry-eyed dreamer been dipping into some Pnakotic Manuscripts? Does he enjoy updated versions of old classics? My point is: there are quite a few powerful tomes that use secrets. Most of these are in the seeker class, which means that the ideal taker of Enraptured, in my view, is a tome-loving seeker -- Daisy, basically, though Amanda and Mandy might take a gander at Enraptured as well. Amanda could potentially trigger it three times on a turn, and pump her Pnakotic manuscripts like a pair of old-school reeboks!

Mordenlordgrandison · 336
I think you could also add a charge to The Pendant of the Queen. Seems like a pretty strong use of the card. Also Rook. — Zinjanthropus · 192 5/28/20
Nice! Forgot about that one. — Mordenlordgrandison · 336 5/28/20
Or Mr Rook — Django · 3898 5/29/20
Don't forget Luke's Gate Box! — Death by Chocolate · 1021 5/30/20
I actually run this in my Father Mateo deck with Alyssa Graham and a Summoned Hound. 3 Intellect is not impossible to work with; you don't need much more (if anything) to combine with Enraptured to make a simple investigate action and get not only a clue, but a spell charge for whatever you like. As the dedicated clue hunter for my group, this works especially well with lvl 4 Rite of Seeking in a 4 player game since there's often a single clue left lingering. It might seem silly to play it in a deck with a willpower investigation spell, but Alyssa also helps protect from weaknesses and the Unbound Beast, and the Summoned Hound can, like I said, help you nap the last clue or fend off an enemy in a pinch. Enraptured is not the best card ever, but every time I draw it, it always gets played and I always use the extra charge from it. And if it can save me from having to spend more actions or resources to do it, then that's just icing on the cake. — LaRoix · 1537 5/30/20
I would agree that this is worth considering in any of the 3 int Mystics. Particularly if combined with Flashlight, Alyssa Graham, or Saint Hubert's Key. Needless to say it's quite good in Marie (4 intellect), as well. — Zinjanthropus · 192 8/22/20
2

Both of the reviews I've read don't really touch on the one investigator who, I think, benefits the most from Enraptured: the good dreamer himself, Luke Robinson.

First of all: he's already /, so he's most likely going to be going at least part-cluever on your team with access to good boosts like Magnifying Glass/Magnifying Glass, Death • XIII, and Dr. Milan Christopher, making the on Enraptured a helpful icon instead of a dud (unless he's investigating with alone off a asset, which... why are you doing that when good investigate events like Read the Signs exist?)

By my estimation, this is a very powerful card for any / deck. Spell charges are precious, and this allows you to replenish them safely (as opposed to Recharge) and almost assuredly. This translates to 2-3 damage (Shrivelling and its upgrades) or 2-3 clues (Rite of Seeking and its upgrades) per Enraptured when they are most desperately needed. Many investigators, such as Norman Withers, Carolyn Fern, and Agnes Baker rely on Shrivelling charges for defense and reliable damage output, and this card allows you to spend those charges more freely by extending the life of the targeted spell.

asgorka · 1
It seems like a hard card for Agnes to use due to the Intellect symbol. — Chobabot · 1 8/22/18
She doesn't need to be the one performing the test. In particular she could toss this into her seeker's check and still reap the rewards. — madhatter152 · 5 8/22/18
Can also toss this on a Flashlight investigation of a low-shroud location (your own Flashlight or someone else's) for a ~95% chance at the extra charge. — CaiusDrewart · 2599 8/22/18
I do think I prefer Recharge once enough extra XP comes in--I think a ~70% chance at 3 charges is superior to a 95% chance at 1 charge, even if Recharge costs an action. That's simply a lot more raw power from the card. Especially since you could, if necessary, help Recharge out with something like Premonition, Time Warp, or a Grotesque Statue card. (Now, obviously it isn't fair to Enraptured to compare it to an XP card; I agree that Enraptured is pretty good.) — CaiusDrewart · 2599 8/22/18
*a Grotesque Statue charge. — CaiusDrewart · 2599 8/22/18
The more cards are release, the more "value" each deck slot has. I'm not sure 1 charge for a spell justifies a whole card. — Django · 3898 8/23/18
That depends Django, for characters that depend wholly on charged spells the one extra charge can mean the difference between being able to garb 2 clues off of a major high-difficulty location, or not at all. Agnes and Akachi can definitely put this to use in combination with Flashlight — Tsuruki23 · 2152 8/26/18