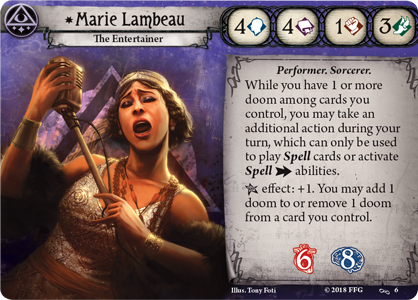 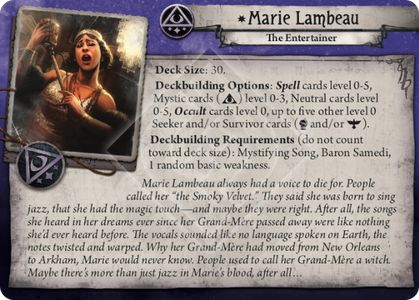 I’ve played this game for a hell of a long time with many many different people, and nobody seems to pick Marie Lambeau.

Maybe she’s not designed for multiplayer; the risk/reward ratio for her as much different. Solo, risking an extra doom might lose your three actions to gain an additional one every turn; in a group, the trade-off is one action for 12.

It’s also because there aren't lot of cards that let you manipulate doom; Arcane initiate, Alyssa Graham, David Renfield, blood pact, and De Vermis Mysteriis. With the latter, you get tons of event compression; one action from the book turns into two.

She’s also a 4/4/1/3 Mystic with a tremendous weakness. She loses an ally slot, and amplifies damage for several turns while adding doom to the board.

Still, with access to spells instead of Mystic cards specifically, she gets some oddities from other classes. Blood eclipse or arcane insight, feed the mind for card draw, Alter fate and suggestion, but as of press time, there are 18 non-mystic spells in the game out of almost 100 spell cards.

The only place Marie might fit is in dream eaters A, where doom totals can reach the double digits without advancing the agenda. Perhaps with more doom cards, but even after six expansions, Marie is still best as a solo act.

MrGoldbee · 1314
I kind of like Marie because she is less dependent on spells to get clues (which is obviously more significant in solo). She can also do the Practice Makes Perfect + Promise of Power combo. she can also take Occult Lexicon and Hallowed Mirror, and use her free action for their bonded cards. She can also take Alter Fate, though I think it would usually be better as a support card rather than solo. IDK, she's fairly interesting for a Mystic. I think people are scared away by the doom play, most likely (and that is worse in multi). — Zinjanthropus · 212 11/3/20
For Doom generation there's also Alyssa Graham, who helps Marie find clues the old-fashioned way with an intellect boost (and forewarning on the Encounter deck), Marie's elder sign ability (which can be triggered to add *or* remove doom at any time with Seal of the Elder Sign), and the good Baron himself. I found, once you have Charisma in play, sometimes the Baron is more boon than weakness - if carefully handled, of course. — Prinny_wizzard · 207 11/3/20
The Baron is definitely a doom card that is relatively easy to get rid of before the Agenda advances (unless it's a really short Agenda). Just leave him at 2 doom, then add the third when you would be in the Witching hour to give yourself 3 more rounds. — Zinjanthropus · 212 11/10/20
I think the "not designed for multiplayer" observation is very astute... or at least, she's a LOT safer to play in Solo. As you mention, 1 Doom > 3 actions in MP. But the real kicker is that in Solo you can be 99% assured that if you clear your doom at (Agenda-2), you won't contribute to an early Ancient Evils advancement. In 4p, though, you have to wind this back to (Agenda-4 or 5) to avoid a risk of Acolyte/Mysterious Chanting/Ancient Evils being pulled in a row... which is a pretty narrow window to play with Doom. — HanoverFist · 551 12/24/20
On the other hand, her signiature card gets a lot better in multiplayer. Mystifying Song gives you 1 full extra round of actions, which means +12 actions in a 4 player game. In fact if you end up with those Cultist + Mysterious Chanting + Ancient Evils combos, she could save you even more rounds by preventing the clock from dooming out and giving you time to kill those cultists. I expect every Marie deck to be running Arcane Initiate, which can find her signature, so I don't think it's unreasonable to expect this to happen every almost every scenario. Honestly I'm a little surprised to see so much hesitancy around doom because Arcane Initiate seems like a very popular card. As long as you're packing cards like Moonlight Ritual, Calling in Favours, Forbidden Knowledge, you should always have a way to clear the doom before you doom out. — Jack · 45 10/2/21
If you have a doom threshold of four and put out a doom on turn 1, with the bonus actions, if you take them every turn, and are playing solo, then you end up even on actions. Any doom threshold higher, the bonus goes to Marie. — togetic271 · 3 12/25/21