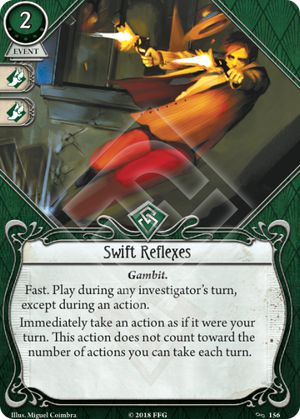 TL:DR, nice effect, there is not a character around that doesn't want this in their deck. Problem is that a free action, at that cost and a cardslot, probably not be what the doctor ordered, therefore it'll rarely see play.

Swift Reflexes is a free action, it even gives you some leeway in when it happens, sneaking actions into someone else's round, useful for example to grab an enemy or snipe a persistent encounter card so that another character might do their thing better. An extra attack, a move, actions are good.

But the problem is the economy, you get 3 actions per turn for a dozen+ turns every game "for free", paying 2 resources and a card is steep but fair, but can you spare the card slot?? You need those slots to build that carefully orchestrated deck, how valuable is that lone bonus action over, say, an extra card draw from a boosted action with one of the neutral skills on it? Do you have enough weapons? Most cards are about generating extra success value from every action, "More success in less actions", a flat +1 action is therefore weirdly often unhelpful, at such a steep cost that is.

Swift Reflexes has 2 on there, so it might reasonably replace a Manual Dexterity, run them together with Backstab to have a pretty good range of options.

It's not a bad card, it's mostly a case of an effect that in of itself is so small that I wonder if it'll be worth it's slot, at that price too. I would be glad to see an XP version that grants some bonuses during that extra action.

I started finding more use for this card, mostly outside the faction. folks tend to pay through the nose for stuff, especially , which is where non-repeating extra actions really shine. Characters with large bonuses already will find Swift Reflexes much more routinely useful then those with 3 or less. Tony Morgan and Leo Anderson for example.

Tsuruki23 · 1726
I testes this card in Preston Fairmont and it was terrible. Even with a round of Trial by Fire I dont recommend this. — StyxTBeuford · 11737 9/3/19
Tested* — StyxTBeuford · 11737 9/4/19
Agreed, Preston doesn’t want to buy actions since it costs him so much to use them. You want this on someone who already has high value actions, or who benefits from acting on someone else’s turn (such as by grabbing an enemy off their face). — Death by Chocolate · 581 9/4/19
I think this could work well in a combat focused Jenny deck. She has all of the money too spend and getting an extra action during a critical round can be huge. I also like that it can sort of replace Manual Dexterity where the worst case is that you use it for 2 skill icons. — TWWaterfalls · 697 11/4/19
0

2 resources and 1 card for 1 action, but 2 cards and 1 card worth 3 actions, so 3 actions for 1 action? Not an impressive card among all those rogue cards providing action. But when export to other factions with Versatile, this ability become priceless. Seekers draw cards so easily, that you can almost consider cards as free. So 2 resources for 1 actions now? If there is any card can get resources as efficient as 1 action (you don't have to count in any cards spent!) for 3 resources, then the combination will become 1 free resource! And then you just use the free resource for more actions! Here is a deck for example.

Tzolkin1065 · 26
I disagree with the basic premise of your argument. Rogues can generate crazy amount of resources such that the resources that you equated to two actions aren't worth nearly the same as two actions. And it also ignores the value of being able to take an action at the highest leverage time. I still haven't used this card in a deck though. It is decent enough to consider but it doesn't end up making the final cut. — TWWaterfalls · 697 2/9/20
I have found one place I do like this card, and that's in Finn Edwards with Crystallizer of Dreams. Taking an extra investigate action and following that up later on with a +2 free evade is solid. But for the most part this card is just too much in my opinion to be worth taking most of the time. You really need some other synergies to make it worth the include imo. — StyxTBeuford · 11737 2/9/20
@TWWaterfalls So this card didn't see much play at least. I was just trying to sell the idea to include this in seekers and create a super easy and stable infinite-loop. — Tzolkin1065 · 26 2/10/20