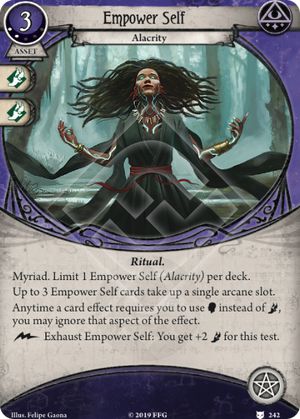 1)Beefing up investigators who already have 3 in a stat, such as Diana's strength, Luke's evasion, Jim's intellect, etc. so they can pass basic tests that don't let them use spells to swap stats - most notably those on treacheries or scenario cards.

2)Giving the option to commit out-of-class skills to Mystic staples for power plays. Deduction onto Rite of Seeking, Vicious Blow onto Shriveling, etc.

Time4Tiddy · 198
For the first use case, Mind's Eye with Sign Magick works much better. — suika · 8615 3/10/21
deduction & sixth sense(4) may be great combo. — elkeinkrad · 316 3/10/21
@suika Not necessarily - You're now talking about a hand slot and both arcane slots and Sign Magick is harder to search. Plus, Mind's Eye can run out. I think there is a good case for Empower Self, especially for Mystics with two 3s in off-stats and only a 4 (or lower) in their base will. (Jim, Diana, Mateo, Luke). These investigators are often using out of class hand items and don't use will for every test. — Time4Tiddy · 198 3/11/21
There's not a lot of basic tests that you have to pass, so the limited charges isn't that big of a deal. And Sign Magick is still easier to search for than the single copy of Empower Self (stat), and Will is probably boosted via Rosary Tarot Renfield (or Cameras) anyway. About the only disadvantage, as you say, is that it doesn't work well with say Enchanted Blade. — suika · 8615 3/11/21
I'm still not sold that Mind's Eye + Sign Magick is the best solution for everybody. Diana plus Beat Cop or Luke plus Alyssa have a 4 in the off stat they are most likely to be using with out of class cards. Getting that stat to a six and committing other cards, like Eureka, Vicious Blow, would be more effective than pushing Will. Jim has a lot of options given his flexible 0 slots. Marie could actually do better with Intellect than Will in some cases. I agree for Mystics with 5 will, this isn't a great swap, but I see benefit for any/all of the 4s. — Time4Tiddy · 198 3/12/21
It's definitely not the best solution for everyone, my comment pertains only for the first use case. If you're getting milage out of the second use case, allowing you to commit Deduction, is the one advantage that Empower Self has. The only problem is trying to find the single copy of it in your deck for that purpose. — suika · 8615 3/12/21
0

These cards are absolutely 100% crazy nutso bonkers good. I thought they would be ‘ok’ after all they’re quite expensive and limited to a once-per-turn boon but I was deeply wrong in that analysis. Play Sefina and investigate once per turn as if you were a 4 intellect Seeker. Punch an enemy or a locked door at 4 despite being a weak butt. Evade that 20 health monstrosity despite being some slow loser like Jim.

They’re slow and expensive, an issue which is only slightly salved by Uncage the Soul and finding the ones you want can be difficult unless you invest in Lucid Dreaming so I could see this being an issue on ‘sprint’ scenarios like Essex but they’re still far too good to pass up. In my opinion they slot best into Sefina right now as they complement her dawdling, defensive stat line nicely, she can make better use of the Alacrity boon than most, and she can more readily pay for them.

Difrakt · 1148
Investigating at 4 seems ok if she's taking Flashlight, fighting at 4 for one damage seems bad. For evasion you're better off using Suggestion I would think, and for investigation you could just use Sixth Sense and get the same boost (or better with Rosary) for 3 actions instead of one. I'm still nowhere close to convinced, I think especially for Sefina who can reliably play/copy the events she needs as the circumstances change something like this seems not at all good for her. Sef in particular has so much demand for her arcane slots now- Haste, Suggestion, Double Double, other Mystic spells- and these are all one ofs in your deck that cost 3 to find and only work once a turn, like a really bad Encyclopedia. — StyxTBeuford · 12725 2/9/20
3 to play* — StyxTBeuford · 12725 2/9/20
I think Daisy probably makes best use of these. Each of them is useful to her. The Int booster lets her boost up to 7 without any further modifiers, which is nice. The Fight booster is marginal but does give her a rat killing option in extremis and the Evade booster gives her a reliable enemy management option for non-rats. She also doesn't really need the arcane slot for a whole lot else. Maybe Guiding Stones and that's about it. Daisy also has access to all the Seeker card draw and search options that would allow her to find them quickly. It is still 3 deck slots though. — Sassenach · 166 2/9/20
Styx you’re missing that the five fight comes *before* weapons or additional boosts. With an upgraded .41 you are then fighting at 7 — Difrakt · 1148 2/9/20
*four — Difrakt · 1148 2/9/20
I'm not missing that fact necessarily, but who would want to take a weapon and this? Empower Self plus Enchanted Blade is already both Arcane slots. — StyxTBeuford · 12725 2/9/20
Specifically in regards to Sef I don't like it because she's bad with most Rogue weapons except Thompson (which is too much of an investment (Thompsona and Empower Self is 9 resources and dependent on a single one of card to make Thompson good) even with a once a turn +2 boost. Like I'm not taking Derringer in Sef just because I can sometimes, if I draw well, hit for 6 combat instead of 4. — StyxTBeuford · 12725 2/9/20
Agh, I severely messed that comment up, but you get what I'm trying to say. — StyxTBeuford · 12725 2/9/20
Jim has access to any level-0 weapon, Diana has guns, Sefina has Rogue guns and the ability to succeed-by-two them, even Akachi could build into Timeworn Brand if so desired. Enchanted Blade is not the only weapon in town — Difrakt · 1148 2/9/20
Sef again I wouldn't take this because relying on a one of to make Rogue guns passable seems like a bad idea, and her arcane slots are super in demand. Jim and Diana are the best use cases, I agree, but Diana is so good with spells because her Will climbs to 5/6 so easily. Jim doesn't need his slots as much so I think that could be interesting. I still wouldn't take Brand with either of them though. Akachi I think is the worst place for this because she wants to maximize Spell Charges, and this is eating a spot that something with charges could take. — StyxTBeuford · 12725 2/9/20
I've played Sefina almost a dozen times now and her slots are not nearly in that much demand. She really doesn't need them to investigate, evade, defend against the encounter deck, and now not even to fight. Rogue guns are also much better than 'passable' due to their secondary benefits, and that's before you start adding in succeed-by-2 synergies. — Difrakt · 1148 2/10/20
For someone with 2 fight I don't see how you can reliably use the succeed by synergies. I'm not sure I follow what secondary benefits Sef gets from other Rogue guns. My Sef builds rely on her arcane slots very heavily, and Haste now with Ornate Bow they're going to do so even more.. — StyxTBeuford · 12725 2/10/20
because with this card she *starts* at 4 and is hitting 7 with a weapon and no commits. That is WHY this set of cards is so powerful. — Difrakt · 1148 2/10/20
sorry I keep quoting +3 incorrectly. She hits 6 with the .41 derringer* — Difrakt · 1148 2/10/20
At 6, but she needs to succeed as if she had 4 to get 2 damage, and it’s only once a turn. Versus Ornate Bow for an easy 3 damage? — StyxTBeuford · 12725 2/10/20
I really must be missing something about this card by how you all are talking about it. Empower says that when using a card that substitutes willpower instead of (pick whatever) use the non-willpower stat. If you're using a gun, it doesn't substitute willpower, so how are you getting the +2 bonus? — jdk5143 · 96 2/10/20
@jdk5143 Look at Empower’s free trigger ability. — Death by Chocolate · 1164 2/10/20
Styx we've gone way too far down the rabbit hole on Sefina specifically here. Ornate bow has numerous downsides you are glazing right over, surely Empower Self has downsides as well but a detailed comparison is not appropriate (nor easily formatted) here. — Difrakt · 1148 2/10/20
I don't disagree, it is awkward to do this through the db. That said I think the glaring downsides of this card, especially for Sef, needed to be stated as your post recommended them for Sef above all others without really delving into why. To me, these are a far cry from "too good to pass up". — StyxTBeuford · 12725 2/10/20
This with Sefina lets her use Blinding Light + Hatchet Man to evade and deal 2-3 damage at the same time. My dream is upgraded Blinding Light + Hatchet Man x2 commited for a 4 damage evade action. — ArkhamArkhanist · 4 3/6/20
Along with the previous post, I can see Sef use it with Binding monster to help keeping the enemy at bay. But still, Empowered self Alacrity is *1 in the deck... — Conalias · 1 12/2/20